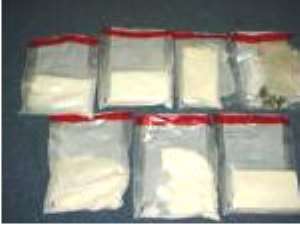 Last March, during a discussion on the decriminalization of drug use at a diplomatic dinner in Vienna, where the United Nations’ drug control entities sit, a Central African representative said that “African countries cannot decriminalize, because only criminals use drugs, and use them to have the courage to do their criminal deeds. In Europe people use drugs because they have access to everything – jobs, leisure – but in our countries, people are not using drugs, and those who use them need to be punished.”

This diplomat’s take on drugs and their presence in society summarizes the most common perceptions of and prejudices against drugs and people who use them. It also recalls how prohibition has been anchored in our countries, although it translated in banning substances our populations used traditionally (such as cannabis in North and Southern Africa), and opening our markets for legal drugs promoted by Western powers (such as tobacco and alcohol).

Indeed, the prohibitionist paradigm imposed by hegemonic powers has found fertile grounds in Africa. The institutionalization of prohibition started when Egypt established the first-ever drug control agency in the 1920s, and the situation has worsened since reaching the militarization of the response in many parts of the continent. At the same time, other countries started introducing harm reduction services and proportionate sentences to mitigate the negative consequences of drug policies they started observing in the 1980s, leaving strict prohibition as the sole paradigm to control drugs at the multilateral level. This has resulted in prohibition ravaging developing economies where violence, spread of infectious diseases and criminal liabilities steadily increased. Africa still suffers the impacts of punitive drug policies, while being left behind in terms of service provision and of judicial capacity.

But back to the statement above made by the Central African diplomat. When read with informed eyes, a telling fact can be found in the middle of many biases. The fact that drug use is more documented among the poorest and most marginalized communities could be checked against evidence, the number of arrests and seizures being higher among this socio-economic group than those with higher incomes, when the prevalence of use is similar. This does not result in “these” people who use drugs being criminals or “them” needing substances to engage in criminal activities, but rather questions the arbitrary nature of drug law-enforcement, which targets people who are easier to apprehend. This is also not an exclusively African feature, but one that is observed the world over, including in Europe.

Controlling drugs is becoming more pressing for authorities all over the African continent, itself rapidly evolving from the image of a “transit continent”, where drugs only transfer from their producing regions to their consumers in the North. Nowadays, major drug trafficking routes go through Africa and feed local consumption. The cocaine route goes through West Africa, linking Latin America to Europe and North America; the heroin route floods the Eastern and Southern Coasts with heroin transiting from South Asia to Europe; with the addition of large producing regions of cannabis in North and Southern Africa, as well as the opportunistic implication of insurgent groups in drug smuggling in the Sahel region. Moreover, and as demonstrated by the West Africa Commission on Drugs, chaired by Olusegun Obasanjo and convened by Kofi Annan, consumption is on the rise. The most consumed substance is reported to be cannabis, with a prevalence of use of 12.4 percent in West Africa alone, compared to the 3.9 percent globally. Drug injection, all over Africa, is estimated to concern one million people (reported cases), with an HIV prevalence of 11.2 percent among them.

The measures that have proved effective in Asia, Latin America and Europe are slowly starting to be implemented in Africa. Mauritius, Kenya and Morocco have introduced substitution and maintenance therapies for those who suffer dependence; Ghana is legislating on decriminalizing drug use, the Seychelles already stopped arresting users and diverts them to the health system, while Zimbabwe and Lesotho legalized cannabis for medical purposes. These innovative policies are being efficiently and successfully adapted to our local contexts, although at a small scale.

There is now an opportunity for Africa to define the global approach to drugs. Next year in March, the international community will gather in Vienna to discuss the last ten years of the implementation of drug control, and to define the next steps in the international collaboration against drugs. This summit will be chaired by an African country. In fact, the summit in which countries are to agree on a strategy to address the cross-border issue of drugs is taking place when measures on the ground are radically polarized: some countries legalize cannabis use, while others condone extrajudicial killings against their people for similar drug use.

The African country that will chair the summit next March will take the helm of this tension-filled multilateral process, and has to find ways to bridge the gaps between countries. This should start by identifying a common position for the 54 African countries members of the UN, as currently African countries provide significantly different positions through the African Group in the UN, the African Union and the Francophonie. Moreover, this new collective position should be aligned with the sustainable development agenda, to make sure that any measures to be adopted internationally are centered on people and communities. Finally, the African representative must tend towards opening a dialogue on contentious issues such as the inadequacy of the current international drug control regime or the moves of some countries towards legalization, while ensuring this debate is multidisciplinary, inclusive, and based on evidence and rights.

Khalid Tinasti is the Executive Secretary of the Global Commission on Drug Policy, and a Visiting Fellow at the Global Studies Institute at the University of Geneva.