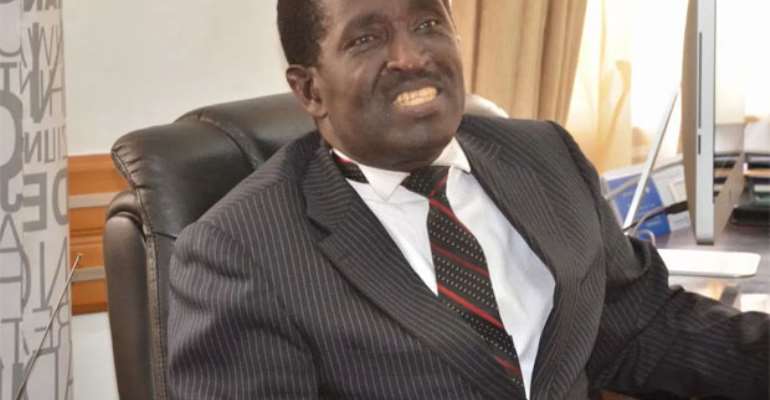 May it please Your Majesty,

Let me begin this open letter to you by saying that you are the one who has given me cause to write to you.

Ordinarily, I have no right to talk to you, even though as a court going lawyer, I can look in the face of the Chief Justice and submit that “My Lord, with the greatest respect you are in error” – in your case, I cannot, because you are a CHIEF. Who am I to say that a CHIEF is in error?

But, Togbe, you lifted the wrong foot when you went on air on Citi FM on 25 October 2018 and granted a very long interview on issues concerning the creation of OTI Region. Apparently the interview did not have wide listenership, so, somebody – I don't know who – sponsored two full page publication of the transcription of the interview in the Graphic.

The other day, Cameron Duodu, one time Editor of the Graphic wrote a piece in which he strongly advocated that chiefs should endeavor to speak through their linguists.

According to history, in the 15th Century or thereabout, the Adansihene, EWURADE BASA was the first king to speak through a LINGUIST. That practice has endured through all generations, to the present, so every chief has a LINGUIST who acts as his spokesman.

Every chief has the right to appoint the most intelligent most witty most eloquent gifted person in his community to be his LINGUIST, so that if the chief simply says “I WILL NOT GO THERE” the Linguist will translate it to mean Nana says “Given the circumstances at the moment, the challenges that are confronting us, it would be inadvisable for Nana's presence to be observed in the location under discussion.”

A chief MUST always speak through a LINGUIST.

The other day, Otuobuor Gyan Kwasi, celebrating his 30th Anniversary on the stool spoke with the wrong side of his mouth, walking himself into trouble with contempt of Court.

Togbe, you know, like every citizen of Ghana, I am also a royal. In fact, the current Omanhene of Awusu Traditional Area, Dwenem, is my younger brother, but I have NEVER wished or dreamt of being a chief, partly because I don't like the restrictions on your liberty but more importantly, I enjoy populist politics; standing at rallies and shouting “chooboi”, writing articles like this, and so on.

Our chiefs should avoid the allure of populism and speaking to the gallery. If you want to go to town like us, put down your crown, and come and join us in the ring, period.

The other day, the youth of Ho demonstrated against the subject. The other day, it was reported that a Pastor has been ordered to leave Jasikan because his sermons were anti – new region. Just what is the issue?

Thanks to Local Government and NPP politics, I have travelled the length and breadth of Ghana, six times. I know Volta Region very well. It is the most seemingly “ungovernable” region in Ghana, due to its geographical layout.

Look at Volta Region, on the map – it is like a tree – the roots, the base is the south, coastline, then the stem, the long skeleton, tiny, then the leaves, broad, up north including Kete Krachi. Capital – down south, in Ho.

I have said it before; the only reason why Government after Government, from Nkrumah down through Busia, Liman…….the reason why they have avoided creating a North Volta Region is only because even through HOHOE is best strategically placed to become the capital of the new region, those who want the new region say they don't want Hohoe to be part of them, let alone being Capital.

The galvanizing reason for creating new regions is for ADMINISTRATIVE CONVENIENCE only – to bring central Government closer to the doorstep of every Ghanaian.

Our national leaders have paid so much Lip Service to DECENTRALISATION that to be brutally frank with you, Ghana means only Accra, Kumasi and the regional capitals. Go to remote areas like KPASSA, DONKORKROM, DEBISO, KWAME DANSO, TUM, PUSIGA…… are they not part of Ghana? Are they not entitled to read Daily Graphic DAILY? In this day and age why should people be killing each other over PIGS and FESTIVALS?

Fifty years ago, at the time Nkrumah was being overthrown, there were 700 Local Councils in Ghana, EACH OF THEM SELF SUSTAINING. They collected taxes, levies, built their own Local Town Halls and were running their own affairs.

The 1966 coup makers dissolved ALL the Local Councils and created only “64 Districts”, raised to 110 by Kwamena Ahwoi's Local Government Reforms of 1988, and systematically increased to today's 275. We are not even yet Half OF President Nkrumah's legacy.

We are creating new regions only to make GOVERNANCE easier, more practical and more close to the people – that is all. The aim is not to divide anybody or any ethnic group. Land ownership has nothing to do with the new regions. It is all an issue of administrative convenience.

Your Majesty, as President of the National House of Chiefs, you are also a Member of the Council of State. Please, avoid giving ex tempore speeches, avoid Kennedy Agyepong's style of contributing to debates on national issues…………………..YOU ARE A CHIEF!

As a first step, I strongly recommend that you SACK all your current LINGUISTS for their failure to advise you to talk less in public. Please, as for OTI region, if I were you, as President of National House of Chiefs, I will never say a word about it.

Nana Togbe, did some old man say that a word to the wise is enough?

Your Subject, by Default,