Prosecute These Political Criminals And Thugs 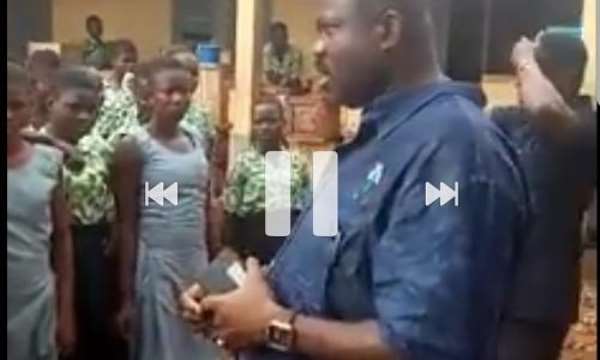 Having miserably failed to permanently regress the intellectual and cultural and technological development of our youths, some operatives of the country’s main opposition National Democratic Congress (NDC) are reported to have savagely resorted to undermining the progress and confidence of students recently enrolled in the newly implemented fee-free Senior High School System by the Akufo-Addo-led government of the New Patriotic Party (NPP) – (See “Police Invites NDC Activist Over Akamba’s Video with Tempane SHS Student[s]” Ghanaweb.com 10/6/18). In the latest of such callously calculated act of sabotage, we have an NDC activist by the name of Emmanuel Bukari, from the Garu-Tempane Constituency, in the Upper-East Region, allegedly seen in the company of Mr. Joshua Hamidu Akamba, described as a Deputy National Organizer of the National Democratic Congress, virulently instigating some students of the Tempane Senior High School to malign or badmouth the unquestionably progressive implementation of the fee-free Senior High School System.

That both the Headmaster of the Tempane Senior High School and the New Patriotic Party’s Garu-Tempane Constituency Secretary, Mr. Anabida Isaaka (at least as it appeared to me in some of the initial media reports), are not taking chances and have promptly reported this socio-politically destabilizing matter to the Garu-Tempane Divisional Police Command, must be heartily commended. In the main, we are told that there is a videotape recording that has gone viral on the Internet and Social Media, on which some NDC-coached students of the Garu-Tempane Senior High School are seen bitterly complaining about acute housing congestion and the poor quality of food served the students. We are also falsely informed that as a direct result of the overcrowding of students, an epidemic of bed bugs has broken out at the school. As disturbing as the foregoing report may come to the completely untutored viewer and/or listener, the incidence of bed bugs in our boarding schools has been around for as long as boarding schools have existed in the country. And it has absolutely nothing, whatsoever, to do with overcrowding or population congestion in our boarding schools.

Rather, the forgoing sanitation problem has generally been a part of the overall sanitation problem in the country at large. It is also very well known that periodically, the government and the authorities of the Ghana Education Service (GES) have issued out contracts for our boarding schools to be fumigated and be rid of such vermin. But what is even far more significant to point out is the fact that the leaders of the National Democratic Congress have organized and developed a deliberate political strategy of regressing the intellectual, cultural and resource development of our youths as a means of grabbing and maintaining their stranglehold on power. This is primarily why since 2008, the now former President John Dramani Mahama has been adamantly insistent that a fee-free Senior High School Policy Initiative, as staunchly and doggedly championed by the now President Addo Dankwa Akufo-Addo, was a practical impossibility and at best a pipe-dream. Now that this most civilized and socioeconomically and culturally progressive policy proposal has been fully implemented, the National Democratic Congress’ leaders find themselves to be irredeemably outmatched and outmaneuvered with little chance of regaining the democratic reins of governance with the next two decades.

You would think that having been thoroughly outperformed by the Akufo-Addo-led government of the New Patriotic Party, these strategically defeated NDC leaders would wisely, even if mischievously and opportunistically, attempt to redeem themselves by suavely and smartly claiming ownership of this very progressive and savvy policy initiative, even as they scandalously did with the John Agyekum-Kufuor-implemented National Health Insurance Scheme (NHIS). Instead, and predictably, we find the Mahama Posse obscenely attempting to push the most underdeveloped regions of the country back into a Hobbesian State of Nature, in hopes of having a fighting chance at the polls by falsely claiming that the Three-Northern-Regions or traditional strongholds of the National Democratic Congress have been deliberately and dastardly neglected by the Kabonga-dominated New Patriotic Party.

It is also significant to point out that for most of the period that the Rawlings-founded National Democratic Congress wielded the reins of governance, at least a third of our able-bodied and talented youths have been deliberately and callously and systematically denied the constitutionally inalienable human right to academically and vocationally improve themselves. You see, Dear Reader, what we are talking about here is an unconscionable attempt by the leaders of the National Democratic Congress to perpetually stagnate the salutary and necessary development of our country. And the most logical response to this treasonous decision by the leaders of the Mahama-instigated and led National Democratic Congress, is for the government to promptly arrest and rigorously prosecute any of these NDC-incubated nation-wreckers forensically established or found to be engaged in the inexcusable and ungodly crusade of destroying the future of our youths and the destiny of our country.

The current policy of the deliberate and systematic destabilization of the country by the Mahama-captained leadership of the National Democratic Congress is unquestionably the worst of its kind since the apocalyptic era of the massive enslavement of Africans by Europeans between the Fifteenth and Nineteenth centuries. We owe ourselves the duty to ensure that the National Democratic Congress is religiously and studiously kept out of Ghana’s political mainstream for the foreseeable future.