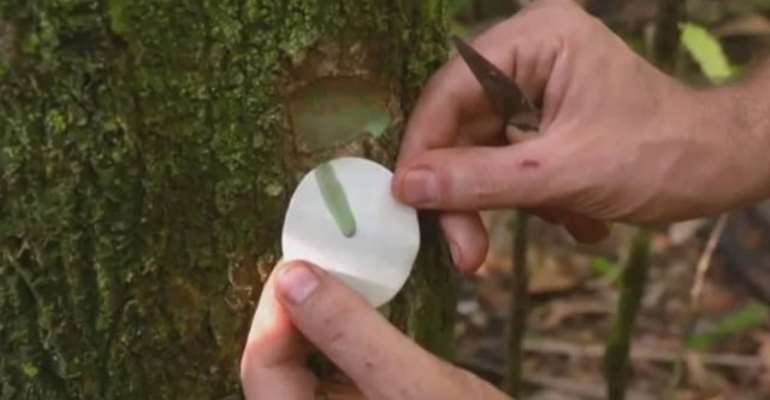 Pycnandra acuminata is a rare tree native to the shrinking rainforests of New Caledonia that has the rare ability to collect large quantities of nickel from the ground. Its blue-green sap reportedly contains up to 25% nickel.

Trees, or plants in general for that matter, and heavy metals like nickel and zinc don’t really go well together, and that’s what makes Pycnandra acuminata and a few other rare tress species known as “hyperaccumulators” so special. They have somehow evolved to suck out normally toxic levels of heavy metals from the soil and store it in their stems, leaves and seeds. Unfortunately, heavy deforestation in New Caledonia has put this remarkable tree on the list of endangered trees before scientists could even figure out how and why it can tolerate such high quantities of nickel in its latex-like sap.

Scientists originally discovered hyperaccumulators in the 1970s, and so far over 65 such plants have been identified in New Caledonia, 59 in Turkey, and a few others in countries like Brazil, Malaysia, Indonesia and the Philippines. However, scientists are convinced that many more remain to be discovered. This capacity to store large quantities of heavy metals has been studied by various biological sciences, from molecular biology to physiology and biochemistry, and while much has been learnt about the hyperaccumulation and hypertolerance of zinc and cadmium by some plants, nickel hyperaccumulation mechanisms remain a mystery.

The evolution of hyperaccumulators like Pycnandra acuminata is believed to have occurred over millions of years, but scientists have yet to identify a universal mechanism of nickel uptake and storage, although some initial investigation has been carried out. The reason why such plants have evolved the way they have is also up for debate.

The “elemental herbivory protection” theory is the most popular among scientists. It proposes that the unusually elevated concentration of nickel protects the plant from leaf-chewing insects and other herbivores, and studies have shown that hyperaccumulated nickel is indeed toxic to most herbivore insects, although some have developed a high tolerance to it.

But there are other theories being thrown around in scientific circles, like the one according to which the nickel has anti-fungal effects which protect the tree from various infections, or the one that proposes that the heavy metal reduces the germination and growth of other competing plants nearby through leaf litter deposition. However, there is still much we don’t know about this type of hyperaccumulators, and at this stage, these are all just theories.

One thing that has been proven, is the capacity of hyperaccumulators like Pycnandra acuminata to clean soil with a build-up of toxic material caused by human activity, through a process called “phytomining”. There is also clear potential for phytomining of heavy materials like nickel in soils that are subâ€economic for conventional mining. Such applications already exist for hyperaccumulators of selenium, thallium and manganese.

Unfortunately, hyperaccumulators are currently in a dire situation, and Pycnandra acuminata is a clear example of this. Due to heavy deforestation, this tree species only exists in fragmented forest patches surrounded by maquis, with probably fewer than several hundred individuals left. With destructive human activity in the New Caledonia continuing, the fate of this metal-bleeding tree and many other species native to this area hangs in the balance.