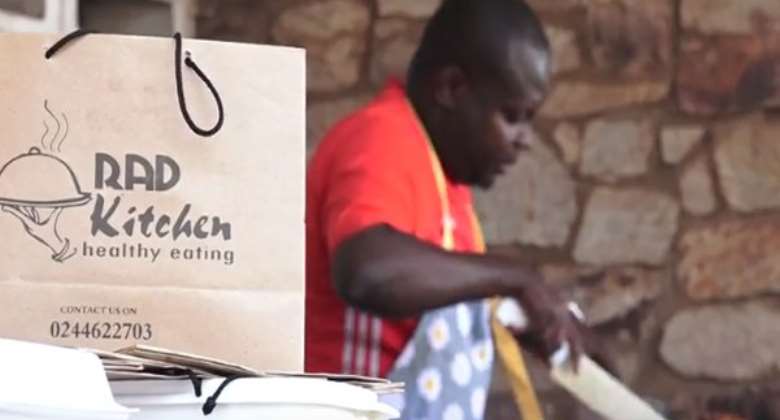 Every misfortune is a blessing in disguise, so are believers of the Christian faith taught and for Raymond Dankwa, losing his job as a manager in 2017, came with a lot of desperation.

The former Deputy Manager of the defunct Capital Bank until he was hit with the bad news, had a happy home and had a positive outlook for his future so long as he remained in the job.

But in 2017, he was rendered redundant due to the insolvency of Capital Bank- terrible news. But the reality of a desperate life dawned on him upon realising that his rent is due this year and his wife is due for delivery- bad luck.

He is part the 700 workers who lost their jobs as a result of the Bank of Ghana’s decision to dissolve cash strapped the banks.

Capital Bank and UT Bank collapsed in August 2017 due to liquidity challenges and all their assets taken over by state-owned GCB Bank.

Five other banks have since gone down for similar reasons.

Raymond started the ‘RaD Kitchen’ where he supplies food to the staff of financial and other institutions.

He also grills pork at events.

However, on Sunday, he received good news from members of Living Stream Cathedral in Accra, where he fellowships to help him expand his business.

It followed a publication by Joy News a couple of weeks ago on his dilemma.

Led by Pastor Reverend Ebenezer Marquaye, the congregation lined up to give cash donations for Raymond.

“People have lost their lives as a result of other people’s actions or inactions and we have a brother who is in need…,” Rev. Marquaye explained the reasoning behind the offertory to support a brother in need.

An excited Raymond Dankwa was in the congregation with hands raised in worship, Joy News’ Justice Baidoo reported Monday.

Lucky Raymond at least, would have something to smile about now as he says the donation is a critical lifeline for his new business.

“I’m looking for a place to expand the business…I think this will assist me in getting a place to start it entirely,” he said.

In a related development, former workers of the now-defunct BEIGE Bank on Monday staged a protest at the Dzorwulu branch of the Consolidated Bank Ghana over unpaid salaries.

The Consolidated Bank was formed in August by the central bank out of a merger of five struggling local banks, including The Beige Bank.

However, management of the Consolidated Bank Ghana says they are in the process of finalising the list of staff to be paid, which they said has contributed to the delay.

A source told Myjoyonline.com that the affected staff would be paid by close of business Monday.