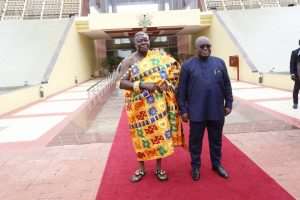 This is the Asantehene’s first visit to Nana Akufo Addo at the Jubilee House after his electoral victory in the 2016 election.

The Asantehene, who was at the seat of government with a delegation of 20 chiefs, will hold a closed-door meeting with the President before departing to Kumasi.

The two leaders were in Kyebi on Thursday for the 75th anniversary of the death of the first Okyenhene, Nana Sir Ofori Atta I.

At the colourful ceremony held at Oforipanyin Fie in Kyebi, Otumfuo for the first time in history visited the Abuakwa Traditional Area in a grand style with over 500 people including his sub-chiefs, other traditional leaders, and staff of the Manhyia Palace making up his entourage.