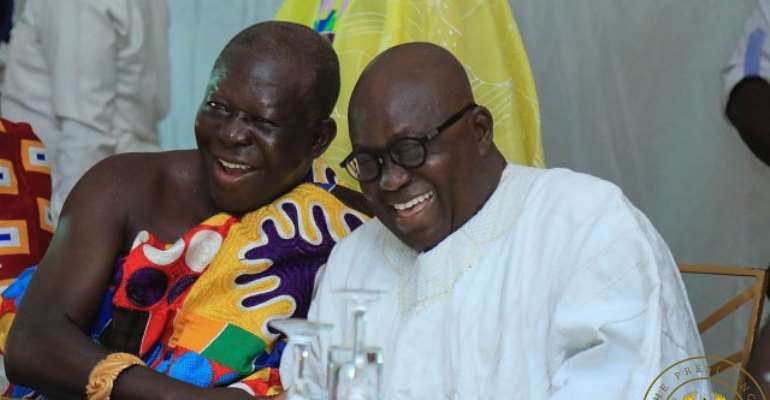 Asantehene Otumfuo Osei Tutu is visiting President Nana Akufo-Addo at the Jubilee House with a contingent of 20 paramount chiefs from the Ashanti Region.

The Asante monarch's visit follows his historic visit to Kibi on Thursday, 23 August, at the invitation of Okyehene Amoatia Ofori Panin II to mark the 75th anniversary of the death of the late Okyehene Nana Sir Ofori-Atta.

At that historic event, Nana Asante Bediatuo, Executive Secretary to the president; and Mr Gabby Asare Otchere-Darko, the president's cousin, graciously took a bow in obeisance.

Mr Otchere-Darko and Nana Bediatuo, both natives of Akyem, incurred the wrath of the Asante monarch a few months ago.

Otumfuo specifically named the two gentlemen and vented his spleen at them during a call on him by a government delegation at his Manyhia Palace in March 2018.

He accused them of plotting to undermine his authority as well as that of Asanteman in favour of Okyeman and Okyehene Amoatia Ofori Panin II.

President Nana Akufo-Addo, also an Akyem, had to intervene by rendering an apology to the Asante monarch on behalf of his kinsmen.

The apology was rendered at a closed-door meeting.