Asantehene Wants Role Of Traditional Rulers Defined In The Constitution 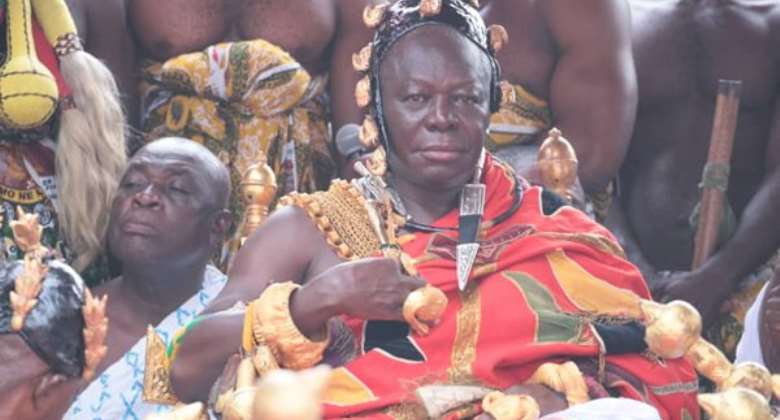 The Asantehene Otumfuo Osei Tutu II is advocating a review of the 1992 constitution to give traditional rulers defined roles in the country’s governance.

He is optimistic such a move will help chiefs shape up the decision-making process and encourage inclusiveness.

The Ashanti king spoke as a guest during the 75th remembrance ceremony of the late Okyehene Sir Ofori Atta I.

Tradition, culture of the two kingdoms was on display Thursday but not without the presence of political power.

President Nana Akufo Addo, former President John Rawlings, together with a host of government officials and thousands of people converged at the Okyeman palace to observe the momentous occasion.

The Asantehene accepted to participate in the program following a similar visit to the Manhyia palace by the Okyehene Amoatia Ofori Payin.

The entry to the durbar grounds of the two traditional leaders was in itself a display of culture and elegance.

Addressing the gathering, the Okyehene underscored the importance of education and encouraged the president to ensure sustainability of the free Senior High School program despite challenges been faced.

He dismissed allegation of rift between himself and the asantehene

The Asantehene Otumfuo Osei Tutu who led an large entourage made up of 21 paramount chiefs, traced the history between the two.

He indicated his visit only cements the cordial relationship between the two.

Speaking to Joy News government officials including the Deputy Attorney General Godfred Dame and Deputy Finance Minister Abena Osei Asare were upbeat about the significance of the ceremony.

The chairman of the NPP, Freddie Blay, who was also present said the occasion was hugely significant.