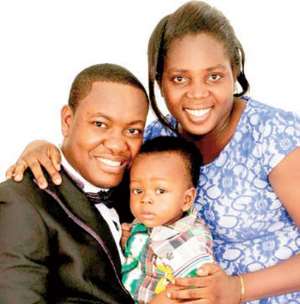 Residents of Akukofoto at Dansoman in Accra are still struggling to come to terms with circumstances that led to the death of five persons, including a three-week-old baby, in a fire outbreak.

The deceased have been identified as Linda Kessie, a 30-year-old French teacher of the Valley View University Basic School in Accra, who was the wife of Pastor Ebenezer Ato Kessie of the Dansoman branch of the Seventh Day Adventist Church; Madam Grace Ampah, 65-year-old mother of Mrs Linda Kessie; Jaden Kessie, four-year-old son of the couple; Precious Pokua, 9-year-old niece of Mrs Kessie; and the infant, who has not yet been named.

The cause of the fire is still being investigated by personnel of the Ghana National Fire Service (GNFS), who have been combing the accident scene for more clues.

Witnesses account It has emerged that a resident called Belinda, who lives adjacent to the gutted house, gave a sad account of what actually happened on that fateful day.

“Around 5: 30am, while still in bed, we heard some dogs in our nearby house barking continuously and so this forced my mother to get up from bed to find out what was happening,” she revealed.

She said later they heard their mother shouting and calling them to come out of the house since there was fire in the adjoining house.

“When we came out, we heard Mrs Linda Kessie shouting for help “I am burning! Fire! Help!” she said and added that the shouting lasted for about five minutes.

The intensity of the flames made it impossible for rescuers to get close to the house.

“Those on the ground floor came out of the house to safety and there was thick smoke all over the place.”

“The whole place became red and we could hear the voice dying down slowly till it ceased. We tried to call the Fire Service several times but the lines were not connecting and so I had to rush to the roadside to pick a taxi to the Dansoman branch of the Ghana National Fire Service but while on the way, I met them and returned to the scene,” Belinda said amid tears.

Another resident, who gave his name as Steve Morgan, described the couple as sociable, respectful, good and kind.

A police source at the Dansoman Divisional Police Command has also hinted the paper that the family of the deceased had visited the station to help the police in their investigations.

The gate to the house has been locked by the police and fire service to prevent people from entering the premises.

DAILY GUIDE gathered that heads of the Adventist Family held a crucial meeting in the morning to find a way of housing the other pastors and their spouses and the holding of funeral for the deceased.

Pastor Ebenezer Ato Kessie, according to sources, left the house for a camp meeting on Tuesday, August 14, 2018, when the incident occurred.

The charred remains have since been deposited at the Korle-Bu Teaching Hospital morgue for autopsy and preservation.

In a statement, Pastor Thomas Techie Ocran, president of the Southern Ghana Union Conference, described the incident as tragic.

“We can only pray that God will be their source of comfort.”

He urged all to continue to pray for the bereaved family to overcome the pain.

The bereaved pastor is the assistant communication director of the Accra City Conference and son of Pastor Anthony Kessie, a former President of the then South Ghana Conference.

The pastor's wife gave birth three weeks ago to their second born so her mother came to visit them with another child to take care of the nursing mother.