Criticising Otabil's Capital Bank Statement Much Ado About Nothing 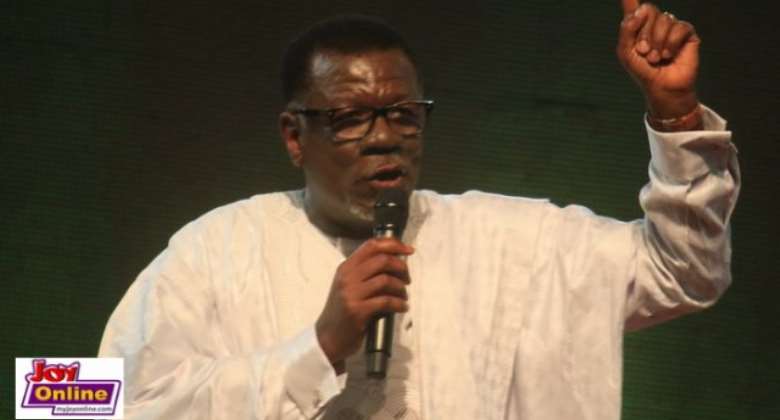 A private legal practitioner says criticism of a statement issued by the head pastor of the International Central Gospel Church in the wake of the Capital Bank collapse is “much ado about nothing.”

Reading copiously Section 203 of the Company’s Act, which is about the about the duties of directors of a company and liabilities, on Newsfile Yonny Kulendi suggested the content of Dr Otabil’s statement were spot on.

He told Newsfile host Samson Lardy Anyenini, what Dr Otabil said was a “statement of fact and a statement of law.”

In the wake of the controversy over the content of the Boulders Report which made some damning findings about the Directors of UT and Capital Bank, Pastor Otabil, a board chairman of the defunct Capital Bank issued a statement saying in part;

“1. I have observed with concern, the ongoing media discussions regarding developments in the Banking Sector and my role either directly or indirectly.

“2. I accepted to be Board Chairman of Capital Bank in a bid to help strengthen a promising Ghanaian enterprise that had potential but also challenges. I was excited about the prospects of a young man from a disadvantaged background who was daring to create opportunities and employment.

“3. My position was a non-executive role. I was therefore not involved in the day-to-day management and operations of the Bank.

“4. In the course of time, some decisions made turned out well while some did not turn out as well as had been anticipated. As far as I can tell, everything was done with the best of intentions and the interest of various stakeholders in mind…”

But the content of his statement has been a subject of severe criticism.

Many critics said point 3 of the statement which suggested that his position was a non-executive role was a ploy to absolve him of blame and responsibility.

Shortly after the statement was issued, a banking consultant Dr. Richmond Akwasi Atuahene, said Dr Otabil should have kept quiet rather than issuing a statement that could irritate the public.

On Newsfile, Dr Atuahene said there was “malfeasance” and “reckless dissipation of people’s money” and the board chair cannot escape responsibility.

Dr Atuahene (L) Yonny Kulendi (R)
He said a board chair provides leadership for the board and is responsible for whatever happens to the bank.

“A board chairman is responsible for the leadership of the board. He is part of the board. So you cannot prove alibi that you never knew. Lawyers say ignorance is no excuse of the law.

Joe Jackson of Dalex Finance who was also on the show was highly critical of the Directors. He had early on suggested that Ghanaians are not angry enough to ensure the right things are done.

But in a rebuttal Yonny Kulendi said the SECTION 203 Company’s ACT says:

“A director shall act at all times in what the director believes to be the best interest of the company as a whole is so as to preserve its assets, further its business and promote the purposes for which it was formed and in a manner that a faithful diligent careful and ordinarily skillful director would act in the circumstances.

“A provision whether contained in the regulations of the company in a contract or in the resolution of a company shall not relieve a director of the duty to act in accordance with this section or relieve the director from liability incurred as a result of the breach of this section.”

Having quoted the law on the directorship of companies, Kulendi said: “This is the law on directorship so all your addition go and refine them because people are making addition and subtraction.

“When the chips are down this is the matrix against which the conduct, the actions and omission of the directors will be measured,” he said.

Vice President of IMANI and head of mPedigree Bright Simons who was also on the show said certain subsidiary legislation in banking which cannot be overlooked in the consideration of these matters.

Bright Simons
But Kulendi said to the extent that many of these laws are primary and subsidiary they will not take precedence over the supreme banking or company law, no matter how relevant they are.

Liability
On whether Dr Otabil erred by including his non-executive directorship portfolio in his statement, Kulendi again read Section 209 of the Company’s Act.

“Where a director commits breach of duty under Section 203 and 205;

“A director and any other person who knowingly participated in the breach is liable to compensate the company for the loss it suffers as a result of the breach.”

Kulendi said for the critics who are on the vilification crusade must be attentive to the operative words “knowingly and participated” and must be able to prove that the directors knowingly, participated in the breach.

He said this is civil liabilities and the test for criminal liabilities is even higher because critics must show that the directors in question with intent decided to breach the regulations and provide evidence for same.

He said the distinction in Dr Otabil’s statement about being an executive and non-executive director is relevant.