The US Government Violates UN Convention On Prohibition Of Biological Weapons 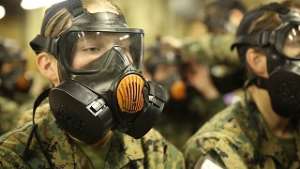 In the past year, she came under pressure from the Bulgarian National Security Agency and was fired from her job in the Bulgarian newspaper “Trud Daily” without explanation.

Despite this, Dilyana continues her investigations. Her current report provides a part of Pentagon’s vigour in the development of biological weapons.

Hundreds of thousands of unwitting people are systematically exposed to dangerous pathogens and other incurable diseases. Biowarfare scientists using diplomatic cover test man-made viruses at Pentagon bio laboratories in 25 countries across the world causing, amongst other diseases, Ebola in Africa.

These US bio-laboratories are funded by the Defense Threat Reduction Agency (DTRA) under a $ 2.1 billion military program, Cooperative Biological Engagement Program (CBEP), and are located in former Soviet Union countries such as Georgia and Ukraine, the Middle East, South East Asia and Africa.

The US Army has been deployed to Vaziani Military Air Base, 17 km away from the Pentagon bio-laboratory at The Lugar Center.

Georgia is a testing ground for bioweapons
The Lugar Center is the Pentagon bio laboratory in Georgia. It is located just 17 km away from the US Vaziani military airbase in the capital Tbilisi.

Tasked with the military program are biologists from the US Army Medical Research Unit-Georgia (USAMRU-G) along with private contractors.

The Bio-safety Level 3 Laboratory is accessible only to US citizens with security clearance. They are accorded diplomatic immunity under the 2002 US-Georgia Agreement on defense cooperation.

Information obtained from the US federal contracts registry clarifies some of the military activities at The Lugar Center, among them research on bio-agents (anthrax, tularemia) and viral diseases (e.g. Ebola), and the collection of biological samples for future experiments.

The Defense Threat Reduction Agency (DTRA) has outsourced much of the work under the military program to private companies, which are not held accountable to Congress, and which can operate more freely and move around the rule of law.

US civilian personnel performing work at The Lugar Center have also been given diplomatic immunity, although they are not diplomats.

Hence, private companies can perform work, under diplomatic cover for the US government without being under the direct control of the host state – in this case, the Republic of Georgia. This practice is often used by the CIA to provide cover for its agents.

Three private American companies work at the US bio-laboratory in Tbilisi, CH2M Hill, Battelle, and Metabiota. In addition to the Pentagon, these private contractors perform biological research for the CIA and various other government agencies.

CH2M Hill has been awarded $341.5 million DTRA contracts under the Pentagon’s program for bio-laboratories in Georgia, Uganda, Tanzania, Iraq, Afghanistan, South East Asia. Half of this sum ($161.1 million), is allocated to The Lugar Center, under the Georgian contract.

According to CH2M Hill, the US Company has secured biological agents and employed former biowarfare scientists at The Lugar Center. These are scientists who are working for another American company involved in the military program in Georgia – Battelle Memorial Institute.

Battelle as a $59 million subcontractor at Lugar Center has extensive experience in research on bio-agents, as the company has already worked on the US Bio-weapons Program under 11 previous contracts with the US Army (1952-1966).

It has been awarded some $2 billion federal contracts in total and ranks 23 on the Top 100 US government contractors list.

The CIA-Battelle Project Clear Vision
Project Clear Vision (1997 and 2000), a joint investigation by the CIA and the Battelle Memorial Institute, under a contract awarded by the Agency, reconstructed and tested a Soviet-era anthrax bomblet in order to test its dissemination characteristics.

The project’s stated goal was to assess bio-agents dissemination characteristics of bomblets. The clandestine CIA-Battelle operation was omitted from the US Biological Weapons Convention declarations submitted to the UN.

“Assessment of powder dissemination technology Assessment of hazard posed by aerosolized toxins and Assessment of virulence of B. Pseudomallei (Melioidosis) as a function of an aerosol particle in non-human primates.”

Melioidosis has the potential to be developed as a biological weapon, hence, it is classed as a category B. Bioterrorism Agent. B. Pseudomallei was studied by the US as a potential bioweapon in the past. Besides the military experiments at the Lugar Center in Georgia, Battelle has already produced bioterrorism agents at the Biosafety Level 4 NBACC Top Secret Laboratory at Fort Detrick in the US.

An NBACC presentation lists 16 research priorities for the lab. Amongst them to characterize classically, emerging and genetically engineered pathogens for their BTA (biological threat agent) potential; assess the nature of nontraditional, novel and non-endemic induction of disease from potential BTA and to expand aerosol-challenge testing capacity for non-human primates.

Pentagon bio labs at the epicenter of the Ebola crisis The US Company Metabiota Inc has been awarded $18.4 million federal contracts under the Pentagon’s DTRA program in Georgia and Ukraine for scientific and technical consulting services.

Metabiota services include global field-based biological threat research, pathogen discovery, outbreak response and clinical trials. Metabiota Inc had been contracted by the Pentagon to perform work for DTRA before and during the Ebola crisis in West Africa and was awarded $3.1 million (2012-2015) for work in Sierra Leone, one of the countries at the epicenter of the Ebola outbreak.

In a drafted report, the Viral Hemorrhagic Fever Consortium accused Metabiota Inc of failing to abide by an existing agreement on how to report test results and for bypassing the Sierra Leonean scientists working there.

The report also raised the possibility that Metabiota was culturing blood cells at the lab, something the report said was dangerous, as well as misdiagnosing healthy patients.

All of those allegations were denied by Metabiota. Military Experiments on biting insects Entomological warfare is a type of biological warfare that uses insects to transmit diseases.

The project covered a larger geographic area outside of Georgia – Caucasus. In 2014-2015, Phlebotomine sand fly species were collected under another project “Surveillance Work on Acute Febrile Illness” and all (female) sand flies were tested to determine their infectivity rate.

A third project, also including sand flies collection, studied the characteristics of their salivary glands.

The common housefly can also transmit a disease

Flies from the Phlebotomine family carry dangerous parasites in their saliva which they transmit through a bite to humans. The disease, which these flies carry, is of high interest to the Pentagon.

In 2003, during the US invasion of Iraq American soldiers were severely bitten by sand flies and contracted Leishmaniasis. The disease is native to Iraq and Afghanistan and if left untreated the acute form of Leishmaniasis can be fatal.

A 1967 US Army report “Arthropods of medical importance in Asia and the European USSR” lists all local insects, their distribution and the diseases that they carry. Biting flies, which live in drains, are also listed in the document.

Their natural habitats, though, are the Philippines, not Georgia or Russia or Africa.