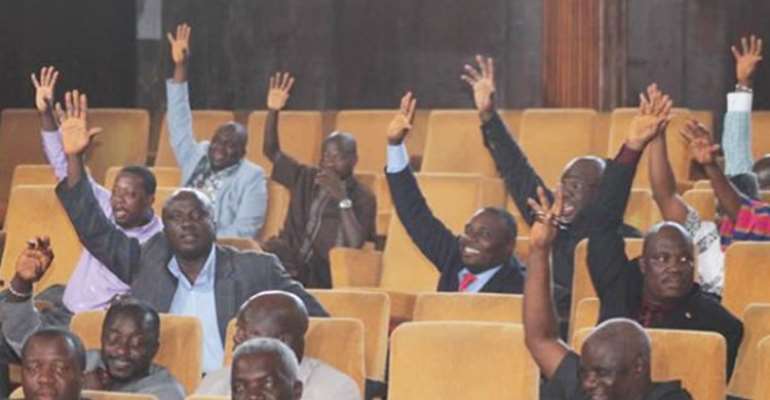 We don't have faith in the collective of membership of the Liberian legislature. The whole legislature is a façade. Apart from the specious filibustering and boring antic, the legislature has always being subservient and played second fiddle to every Liberian leader. A rubber stamp institution it is, thus making it anachronistic in the context of check and balance. In true, check and balance, in the context of Liberia, is only on the paper. The reality is different. The legislature is just a burden taxpayers have to shoulder to make Liberia appears like it has a democracy with three separate but equal branches.

All thanks to the legislature at long last the ill-fated Eton Finance PTE Limited-GOL loan agreement has been ratified by the body, against the advice of avowed Liberian nationalists with envied knowledge about the economic conundrum said transaction poses to the country in the not too distant future. Interestingly, it all happened today after the requested 10% percent of the legislature was made available by President George Weah, continuing the vicious cycle of bribery and inducement, while the masses of the people rot in grinding poverty.

Of course, President Weah is a good copycat. He is of the Ellen Johnson Sirleaf variety—the duo are unanimous in bribing the legislature to get their favored deal ratified with ease like the speed of light. Like Weah, like Ellen—same tactic different characters.

The Government of Liberia justifies this shady loan deal in light of the fact that the country is cash-strapped and in dire need of road to connect the country, thus bolstering economic activities and ensure free movement of the people. In all its likelihood economic output has little to do with this action. Instead, it is a pretext to put an economic and humanitarian aureole around a classic case of money laundering.

However, so not astonishingly, the ruling clique and their favored media mercenaries are now signing hosanna and nursery rhyme for the passage of the shady loan deal. With the odor of money laundering smelling all over the deal, similarly, the second proposed loan agreement between the GOL and EBOMAF Group in the tone of US$ 426 million is touted as “bombarding the people with development’’ and “connecting the country”—and each further creating a potential debt crisis which will plague the country.

This doesn’t mean that we are against the Weah government from succeeding on its promises to the people—that is if it made one to the people. But it is important to put this issue into the context so as to ascertain the long-term effect this loan will have on Liberia’s national purse. Thus, we ask the following questions: What is Liberia’s debt to budget or GDP ratio? Where is the financial analysis on the future revenue projections that will be accrued as a result of the project? Is there mean for the creditor to fully assess the capability of the borrower to pay the loan? Sadly, to these and many inquiries we have been branded as “angry losers’’ and “individuals suffering from post-election trauma.”

What one expects from an assembly which is inundated with pliant stooges and lousy carpetbaggers of the first order? Those greedy elements in the legislature are the reflection of the lousy value system in our country. And this lousy value system is manifested in the outrageous appetite for wealth, making implacable greed the new normal in Liberia. As a result, the nation will continue to bleed profusely.

This is why we told people Ellen Johnson Sirleaf is not a savvy politician as they would want us to believe. She got along with what she wanted because she bribed the Legislature. She has given the script to President George Weah. He seems to be a fast learner in bribing the Legislature. His wishes will be accepted without any preconditions. With those spineless echo chambers at the Legislature, any person who is president of Liberia will continue to get his/her will done.

This is why we don’t believe in the illusion in the least that transformation in Liberia can happen from the top. For Liberia the top to bottom transformation of our society is at best a weird dream. The whole system is being choreographed into just accepting what a president says. But such is the normal in most backward countries where the ruling class is the office boy of foreign capital--expect it to be against the interest of the people.

That is why we say in a bourgeois society the state is not a neutral body above society. It is an instrument of the rule of the dominant class. In the case of Liberia, this class is the unproductive, rotten Liberian ruling class which cannot develop the means of production like the European bourgeoisie did due to its (Liberian ruling class) late emergence on the scene of history. Consequently, it feasts on the national purse. Franz Fanon from his careful analysis of theory rightfully calls it the false bourgeoisie.