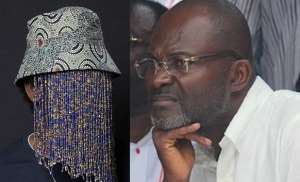 For starters, permit me to first and foremost express my admiration for Anas Aremeyaw Anas for his painstaking investigative journalism which has succeeded in exposing dizzying levels of the stinking corruption that has engulfed our motherland in virtually all facets of life! He deserves plaudits for devoting and sacrificing the comforts of his life to such a perilous endeavor!

Ever since snippets of Anas' latest yet - to - be screened exposé on GFA's corruption got leaked to the media, thanks to the indiscretion of the Presidency, I have heard a flurry of attacks not on the content of Anas' work but on his person! There appears to be a concerted effort, spearheaded by the loudmouthed MP for Assin North, dishonourable Kennedy Agyepong aimed at deflecting attention from the relevant issues emanating from the potentially explosive GFA corruption exposé!

In light of these developments I would like to interrogate the relevant issues at stake and in the process advise the errant MP to put a stop to his empty, insipid and idle jabber and address issues as is expected of an MP who is worth his salt! In blunt language he should stop blowing hot air if he has nothing meaningful to say to Ghanaians. After all , didn't Plato leave us with the incisive words that "if you have nothing to do , don't do it"!

There is the argument that Anas induces people to take bribes and then takes a video of them in the act of accepting the bribe and in turn uses it as evidence against them.

But you just wait! Leaders who are put in positions of trust are expected to be above board in their dealings with people . They are supposed to exhibit the highest standard of integrity and exude an aura of ingenuity and incorruptibility. If a leader throws this to the dogs and does not deem it infra dig to accept a bribe from Anas or whoever in order to bend the rules or do the bidding of the bribe giver then he has no business holding a position of public trust! In fact , what it means is that even if it had not been Anas but any order person Nyantakyi was prepared to be compromised. At any rate, Nyantakyi had no idea at the time time that it was Anas that he was dealing with.

In any case , is it not interesting that Nyantayi proceeds naturally and effortlessly to mention specific amounts of money that would suffice in manipulating the President, the Vice President and Referees including sexual enticements to boot! One can easily diagnose or decipher from the relax posture and composure of Lawyer Nyantakyi that bribe taking has been the norm during his 14 year lacklustre

reign as GFA President!
As part of the smear campaign to discredit Anas Aremeyaw Anas, the acerbic tongue MP, Kennedy Agyepong, has catalogued a cornucopia of properties that according to him belonged to the renowned journalist and concluded that but for corruption and subterfuge Anas couldn't have come by such wealth. What has gotten my hackles up is that after making such fanciful allegations he insists that the ace journalist must speak to them and proof that they are wrong! This is puerile and downright immature , coming from an MP. Whatever happened to the fundamental and universally held principle that whoever alleges must prove!

If even a blinking idiot of Kennedy Agyepong's proportions can boast of edifices and an array of properties he owns across the country for doing nothing, what prevents a journalist of international repute who bells the cat often to expose corruption and serious acts of venality in high places from becoming well to do! The riskier ones job the more rewarding ones pay!

It is only a member of Parliament who is inert in the house of Parliament and who consorts with prostitutes that can arrive at the ridiculous conclusion that a man's occupation should determine the quantum of his wealth. Kennedy Agyepong needs to be apprised of the fact that with sound management of ones resources and with the right investments it is possible for a journalist to become exceedingly affluent.

If the outlandish accusations of Kennedy Agyepong are anything to go by, why is he not triggering the processes that would lead to Anas being hounded before the law courts to face his comeuppance instead of yammering gibberish everyday on radio as if anybody is taking him serious!

Candidly, Kennedy Agyepong would have been a priceless addition to the British Circus show instead of wasting away in the guise of a Member of Parliament! How should we allow a man who is incapable of keeping the flap of his zip up and who is totally immersed in debauchery to pontificate to us about what is ethical and what is not.

We are aware that when a certain deputy majority leader came to him to solicit for assistance to join mainstream politics Kennedy Agyepong forcibly had sexual intercourse with her leading to the conception of her first born. But this was kept under wraps! Fired on by the ambition to rise in politics the lady in question succumbed to further sexual advancements leading to the birth of a second born! Her meteoric rise to the positions of the deputy majority leader and a procurement Minister are the benefits she has bagged as a result of her illicit sexual encounters with the piles infested and Cocaine peddling Kennedy Agyepong!

Else, what explains why such a beautiful but brainless lady would allow an ogre like Kennedy Agyepong, who is suffering from halitosis to "sleep" with her !

I have incontrovertible evidence pointing to the fact that Kennedy Agyepong barters financial assistance and employment offers for sexual gratification from ladies who come to him seeking employment and financial assistance! This sex addiction has gotten to such a compulsive extent that he has been sexually abusing innocent Senior High Students who are in dire need of assistance from his share of the MP's common fund to pay their school fees. In fact, he has had to settle several victims of his sexual escapades financially to hush up the issue!

As if Kennedy Agyepong is not comic relief enough another corrupt clown of a chief has emerged rivaling him for the topmost position of a 21st century Lancelot Gobo! I am wondering in heavens name how anybody would take that imbecile of a chief who came alleging that Anas had taken a bribe of 50,000 dollars from him, serious. The Chief , who ostensibly has been rented by Kennedy Agyepong to assist in his smear campaign against Anas,claims this bribery incident happened several years in the past! My question is, why is he coming out now after several years in "purgatory "? What benevolent spirit has all of a sudden seized him to come out now? If he is a penitent in dire need of forgiveness and deliverance he should visit a Confessional and stop wasting precious airtime!Ghanaians are so discerning as to be able to determine the antics of a character assassin !Is this nincompoop of a Chief aware that a bribe giver is as guilty as a bribe taker? Owing to the proliferation of mass media, any nitwit, without any scintilla of evidence can go and sit on NET 2 TV or Oman FM to level baseless accusations against Anas - it doesn't entail much effort to do that!

If I were a subject under this quack chief, thief sounds more fitting, I would by now have activated the traditional processes that would lead to his destoolment.

Permit me to add that there are other nagging questions that must arrest our attention. Firstly, this is not the first time Anas has unearthed rot in the system using the same modus operandi but in the previous instances the Cocaine Oligarch neither expressed any dissent nor disapprobation against Anas' style of smoking out corrupt elements. So, what has changed this time around that has sent Kennedy Agyepong on the prowl; ranting, raving and raging like a castrated bull - wishing fire and brimstone on the celebrated journalist? Is it because he and his government are beneficiaries of the orgy of corruption, fraud ,loot and debauchery at GFA? That may be the case because we are told it is revealed in the tape that Nyantakyi sponsored the campaign of Saint Nana Addo and the uncultured up and coming corruption Kingpin,Anthony Karbo!

A member of Parliament who could descend into the gutters to trade unprintable insults with Efua Swarzzenneger on live TV and who boast often of exchanging fisticuffs with people who do not meet his expectations on the street is not worth the while of Ghanaians.

Somebody should tell Kennedy Agyepong to stop puking balderdash and making himself an object of public ridicule in the process! Those who were misled by his empty boast on TV to the effect that he has evidence to prove Anas is corrupt himself should by now feel let down by this conceited braggart!

The audio recording he is bandying about as evidence of Anas engaging in corruption is a doctored version of Anas' own investigative piece where Anas was trying to elicit vital information from a group of outlaws by presenting himself as an interested Party in the bargain in order to encourage the guys into admittance! Why this milksop of a member of Parliament would decide to present this as evidence against Anas to buttress his idle boast on TV is anybody's guess!

At this juncture ,in another failed attempt to besmirch the hard earned reputation of Anas, others of Kennedy Agyepong's ilk claim without any modicum of evidence though that Anas was bribed by former President Mahama not to screen a video of Parliamentarians indulging in underhand deals! This however flies in the face of the truth and the evidence at our disposal! As long as there is no shred or iota of evidence advanced by his accusers to corroborate this allegation, it should be taken with a pinch of salt! Such speculative conjectures should be treated with utmost contempt!

Others too claim they are suspicious of the motive behind BBC's decision to partner Anas in this latest exposé and they have argued rather ludicrously that there are ulterior motives behind this partnership.

For me , these issues are extraneous, irrelevant and a nonstarter.Whatever motivation might have propelled BBC into collaborating with Anas does not detract from the fact that high profile GFA officials have been caught pants down indulging in shady deals that have ultimately undermined the sanctity of Football in Ghana! In fact, we can attribute the poor showing of our National teams in international matches to such nation wrecking proclivities! We should be infinitely grateful to BBC and for that matter Anas for helping us to detect the culprits behind the poor administration of football in the country - they have done what several committees that were set up in the past ,with our taxes to look into the halting performances of our national teams failed to do. In essence they have done what Napoleon could not do!