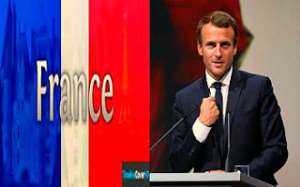 The French state collects from its former colonies annually 440 billion euros in taxes. France relies on revenue so as not to sink into economic insignificance, warns former President Jacques Chirac.

The case shows that a just world is difficult because the former colonial powers have become dependent on exploitation.

In the 1950’s and 60’s, France's African colonies decided to become independent. Although the Paris government formally accepted the declarations of independence, it demanded that the countries sign a so-called "pact to continue colonization."

As a result of this law, 14 African countries are still required to store around 85 percent of their currency reserves in the French central bank in Paris. There they are under the direct control of the French Ministry of Finance.

The affected countries have no access to this part of their reserves. If their remaining 15 percent reserves are insufficient, they must borrow the additional funds from the French Ministry of Finance at market rates. Since 1961, Paris controls the currency reserves of Benin, Burkina Faso, Guinea Bissau, Ivory Coast, Mali, Niger, Senegal, Togo, Cameroon, Central African Republic, Chad, Congo, Equatorial Guinea and Gabon.

In addition, these countries have to transfer their "colonial debts" each year for the infrastructure set up by France to Paris, as Silicon Africa reports in detail. France receives around 440 billion euros every year. The Paris government also has a right of first refusal on all newly discovered mineral deposits in African countries.

Finally, French companies must be given preferential treatment when placing orders in ex-colonies. As a result, most utilities in the areas of utilities, finance, transport, energy, and agriculture are in the hands of French corporations.

The leadership elite of each country has no choice but to meet the demands. If the African politicians refuse, they are threatened with an assassination or the overthrow of the government. In the last 50 years, a total of 67 coups took place in 26 African countries. 16 of these 26 countries were former colonies of France.

An example of this is the first president of the West African Togo, Sylvanus Olympio. He refused to sign the "Pact to continue colonization". But France insisted that Togo pay compensation for the infrastructure that the French had built during the colonial era.

The annual sum was about 40 percent of Togo's budget in 1963 and quickly brought the newly independent country to its economic limits.

In addition, the new president Togos decided to abolish the French colonial currency FCFA and print its own national currency. Only three days after this decision, the new government was overthrown by a group of former foreign legionnaires and the president was killed.

The legionary leader, Gnassingbe Eyadema, received the equivalent of 550 euros from the local French embassy for the assassination, according to the British Telegraph. Four years later Eyadema became the new president of Togo with support from Paris.

He established a tyrannical dictatorship in the West African country and remained in power until his death in 2005.

In the following years, the government in Paris repeatedly resorted to former foreign legionaries to overthrow unwanted governments in the ex-colonies. Thus, the first president of the Central African Republic, David Dacko, was overthrown in 1966 by former members of the Foreign Legion.

The same happened to President Burkina Faso's Maurice Yaméogo and Benin's President Mathieu Kérékou. And even the first president of the Republic of Mali, Modiba Keita, fell victim to a coup by ex-legionaries in 1968. Only a few years earlier he had decided to abolish the French colonial currency.

By contrast, the other colonial powers have abandoned such measures. Britain had to learn its lesson in the wake of the American Revolution of 1763. The trigger was Britain's decision to impose the costs of the recently ended French and Indian wars on American colonies.

The protest, however, culminated in the "Boston Tea Party" and finally in the War of Independence and the founding of the United States in 1776.

In 1778, the British Parliament passed the "Taxation of Colonies Act". In the UK, Britain did away with taxes and duties on sales in the colonies "British America" and "British West Indies".

The same applies to the former colonies of Australia and Canada. Although these are still part of the "Commonwealth of Nations" and are thus formally subject to the British royal family, at least since the declaration of independence of the countries at the beginning of the 20th century, the tax exemption lies exclusively with the local governments.

The former Dutch colonial power no longer levies any taxes on its former spheres of influence in South America and Southeast Asia. In Southeast Asia, at the beginning of the 20th century, finances had been so disastrous due to devastating wars that the Netherlands had to provide regular financial support for their colonies.

The kingdom separated from much of its colonies as early as the beginning of the 19th century. Most recently, the Netherlands Antilles left the kingdom in October 2010. Only the Caribbean islands of Aruba, Curaçao, and Sint Maarten are still part of the Kingdom of the Netherlands.

The political elite of France, on the other hand, has no intention whatsoever of removing the relics of the colonial era and of liberating the former colonies into complete independence.

Rather, in Paris, the fear seems to prevail that you could sink without the revenue from Africa in the economic insignificance. Former French President Jacques Chirac said in March 2008: "Without Africa, France would slip into the rank of third world country."