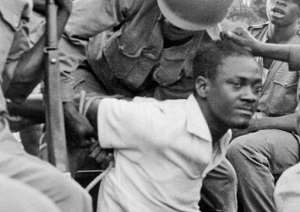 Patrice Lumumba was the first prime minister of the Republic of Congo and a pioneer of African unity. He was murdered on January 17, 1961, by the Belgium government after he fought for the independence.

Democratically elected to lead the Mouvement National Congolais, the party he founded in 1958, Lumumba was at the center of the country's growing popular defiance of the colonial rule of oppression imposed by Belgium.

In June 1960, when independence was finally won, his unscheduled speech at the official ceremonies in Kinshasa received a standing ovation and made him a hero to millions.

A threat always to those who sought to maintain a covert imperialist hand over the country, within months he became a victim of an insidious plot. He was arrested and subsequently tortured and executed.

Ludo De Witte's book, 'The Assassination of Lumumba' unravels the appalling mass of lies, hypocrisy, and betrayals that have surrounded accounts of the assassination since its perpetration.

Making use of a huge array of official sources as well as personal testimony from many of those in the Congo at the time, Ludo De Witte reveals a network of complicity ranging from the Belgian government to the CIA.

Chilling official memos which detail 'liquidation' and 'threats to national interests' are analyzed alongside macabre tales of the destruction of evidence, putting Patrice Lumumba's personal strength and his dignified quest for African unity in stark contrast with one of the murkiest episodes in twentieth-century politics.

The disposal of the body of Patrice Lumumba
The bodies of Lumumba, Mpolo, and Okito were not to stay in their new grave in Kasenga for long. A definitive solution was planned over the next two days.

Early in the afternoon of January 21, two Europeans in uniform and a few black assistants left for Kasenga in a lorry belonging to the public works department, containing road signs, geometrical instruments, two demijohns filled with sulphuric acid, an empty 200-liter petrol barrel, and a hacksaw.

According to Brassinne, all the equipment was provided by the public works department and Verscheure and Belina, also confirmed that the sulphuric acid came from the Union Miniere.

On their arrival, they unloaded the road signs and theodolite to make passers-by think that they were doing a land survey. But they couldn't find the grave and had to stop searching at nightfall.

Not until the evening of the next day did they find the grave and start their lugubrious task. The corpses were dug up, cut into pieces with knives and the hacksaw, then thrown into the barrel of sulphuric acid.

The operation took hours and ended the next morning, on January 23. At first, the two Belgians dismembering the bodies wore masks over their mouths but took them off when they became uncomfortable.

Their only protection against the stench was whiskey, so according to Brassinne, they got drunk. One of the black assistants spilled the acid on his foot and burned him badly.

After this gruesome task, they discovered that they didn't have enough acid and only the bodies aren't completely consumed. According to Verscheure, the skulls were ground up, and the bones and teeth (the body parts neither acid nor fire couldn't destroy) were scattered on the way back.

The same occurred with the ashes. Nothing was left of the three nationalist leaders. From 1961 till now, their remains, even the most minute traces of them were found.

Part of Lumumba’s body kept as a souvenir

However, from an article published by the Daily Maverick, it is revealed that The Belgian magazine Humo, published an interview with Godelieve Soete, one of the daughters of Gerard Soete, who died in 2000, who had claimed that he had disposed of his macabre “trophies” ( The body parts of Patrice Lumumba) in the sea.

However, during the interview, his daughter presented the magazine's photographer and reporters with a small box which contained a gold-wrapped molar that had been ripped from Lumumba's jaw before his body was disposed of.

While the tooth was being photographed for the first time the journalists, Jan Antonissen en Hanne Van Tendeloo, asked Soete's daughter whether seeing it affected her in any way.

“Mais non, ‘Ce n’était quand-même pas un homme sérieux,” she replied. (Loosely translated “But no, he was a man of no importance”).

While Godelieve remembers her father as a brutal disciplinarian and recounts the effect the gruesome task had had on his psyche and her family, there is little insight into the wide consequences not only of her father's deeds but of the devastating Belgian colonial rule so vividly captured in Adam Hochschild's best-selling “King Leopold's Ghost: A Story of Greed, Terror and Heroism in Colonial Africa”.

Her disturbing lack of empathy and understanding and insistence that HER father and HER family were actually the victims, speaks volumes about the perverse mindset of those who have never had to face or account for their role in a brutal history.

“My father never received any recognition or thanks for the work he did,” Godelieve told Humo.

When the journalists ask who it was she expected should afford her father this “recognition”, Godelieve replies that after the 2001 parliamentary commission Belgium's then Minister of Foreign Affairs, Louis Michel, had apologized to Lumumba's family on behalf of the country.

“Why did the family of Lumumba receive an apology but we did not? They lost their brother and father but we also lost someone, my father. Why doesn't Belgium apologize for the inhuman instruction they gave him?”

She said after De Witte's exposure of the assassination in 1999, she wondered why her father had “reopened the wounds.”

It’s hard to understand why a continent called Africa will pass through such horrible experiences all of because of the wealth the continent has. If Europe and America want to steal from Africa, they can do so but they mustn’t kill the leaders and Africans. From slavery to colonial brutality, Apartheid, medical crimes, Aids and Ebola. What comes next?

It is important that the mortal remains of Patrice Lumumba are returned to his family so that a mourning period that has endured for 55 years can begin to find some sort of closure and so that the last resting place of this African icon can become a place of remembrance of a man who gave his life to bring real independence to his country and continent.”