Ghanaian Non-profits And Philanthropists Meet To Strategize For Self-sustainability 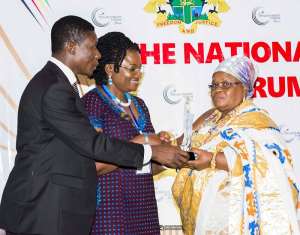 The third edition of the National Philanthropy Forum and Awards have been held in Accra, with focus on promoting and sustaining the work of the third sector (NGOs, CSOs) to impact national development.

The year's summit, which was under the theme: “The Role Of the Third Sector (NGOs, CSOs) in Attaining National Development” took place at the Accra International Conference Centre from March 28-29.

The event is organised annually to bring together NGOs, CSOs and other actors within the third sector as well as those in other sectors of the economy to engage towards improving the country's philanthropy space.

Members of the Philanthropy and NGO community as well government officials and traditional leaders heavily attended the 2-day event.

Hon. Otiko Afisah Djaba, the Minister for Gender, Children and Social Protection, delivering a speech at the summit, noted the importance of the 'third sector' (non-profits) to national development, saying it could not be overlooked.

The Minister, who was the Special Guest of Honour at the conference, said her ministry was prepared to collaborate with stakeholders within the nonprofit sector to address social challenges.

She also called on NGOs and CSOs to channel their resources and efforts towards child protection and women empowerment to help bridge the gender gap.

H.E Dr Naa Asie Ocansey, who gave the keynote address, stressed the need for collaboration within the sector, adding that it would help the nonprofits sustain their work and achieve greater results.

She urged actors in the sector to be pragmatic in their operations in order to meet the exact need of the communities they serve.

The summit ended with an awards ceremony, where eleven humanitarians were honoured for their outstanding philanthropic contributions towards developing society.

The number included philanthropic individual and organizations, celebrities and traditional leaders as well as a civil society organisation.

According to Dr Ben Ocra, President of the Ghana Philanthropy Forum, the awards scheme was instituted to recognise the efforts of philanthropists andnonprofitsgroups to celebrate and encourage them.

“By this awards, we do not seek to pay them back for their benevolence, but instead, to appreciate their efforts, hoping they get encouraged to domore for society”, he said.

Dr Samuel Amo Tobbin of Tobinco group of companies was presented with 'Philanthropist Of Year' award.

Musician Kwame Nsiah Appau (Okyeame Kwame) and Mr Kwame Sefa Kayi of Peace FM were given 'Celebrity Philanthropist' Of The Year and 'Philanthropic Media Personality Of The Year' awards respectively for their various humanitarian endeavours.

'Royal In Philanthropy' award was bestowed on His Royal Majesty Drolor Bosso Adamtey I, traditional ruler of the Shai Traditional Area and Chancellor of the University of Professional Studies, Accra (UPSA) who also is Chairman of the Firstbanc Group.

Professor Asafua and Theodosia Jackson of the Jackson and Deen Foundations in Kumasiwere presented with 'Extraordinary Achievement Award 2018', while Mr Francis Bichnord Komla Ansong, the Executive Director of Voice-Ghana was named 'Community Hero of Philanthropy of the Year'.

'Noble Philanthropist Of The Year' and “Outstanding Development Practitioner of the Year” went to Rev. Monsignor Alex Bobby Benson of Matthew 25 House and Mr Siapha Kamara of SEND-West-Africarespectively.

For his resourcefulness in bringing to an end a 31-year long conflict between the Bimobas and Konkombas and other conflict resolution feats in northern Ghana, Naa Golbilla David Kansuk, the chief of Nakpanduri, was given the 'Royal Emissary Of Peace award'.

Mr Dela Ashiabor, the Deputy Director at the department of social welfare was named the “Third Sector Public Official Of The Year' while IMANI-Ghana was recognised as the “CSO Think Tank of the Year”