Obasanjo Has Spoken In Nigeria...ghanaians Are Eagerly Awaiting Rawlings' Fire And Brimstone 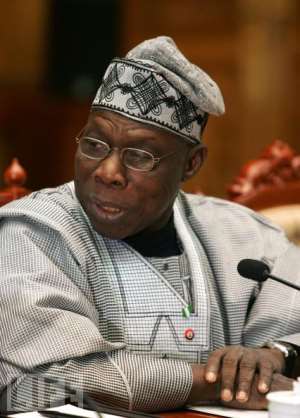 Obasanjo has been a deciding factor in Nigerian politics since his reign as President between 1999 and 2007. He does not only decide who must lead Nigeria,he also sees them off when he is not satisfied with their conduct and performance and does his assessment based on his own prepared performance criteria. He successfully brought in Jonathan after Yar'Adua. He later turned his guns on Jonathan,took him to the cleaners and insisted that Jonathan didn't deserve another term in office. His 18 page missive began the end of Jonathan era in Nigeria. He declared his support for Buhari in their last election and vehemently attacked the Jonathan admiration accusing the former President of presiding over unprecedented corruption in Nigeria. He described Buhari as incorruptible and made sure Nigerians bought into his Buhari crusade. He alleged that Jonathan was engaged in do-or-die politics. This was what Obasanjo told the world before their last election-"I believe the President's fear is particularly,motivated by the person he sees as his likely successor,that is General". That was his reaction to an alleged planned postponement of their last election. He said "I believe people would have been telling him [Jonathan] that Buhari is a hard man,he would fight corruption and you [Jonathan] may end up in Jail". That was Obasanjo who ruled Nigeria on the ticket of the PDP.

Few months after Buhari's inauguration, Obasanjo turned his fire on the man he supported with all his might, the man he described as the new messiah coming to incarcerate souls he deemed corrupt. He has written a letter to Buhari asking him not to in the next election citing old age, corruption, nepotism and general abysmal performance as reasons for his call. Obasanjo has revealed that he will join hands with a movement he called Coalition of Nigeria ,to fight against the ruling party led by Buhari and the PDP in next year's election. He recently remarked that "The Buhari administration has failed Nigerians. Nigerians have no time for excuses and postponement of policy implementation. Nigeria deserves and urgently needs better than what they [APC] have given or what they are capable of giving". His movement and ideas are gaining grounds in Nigeria.

In Ghana, the first President of the fourth republic and founder of the NDC expressed same sentiments after the 2008 election. He vehemently attacked his successor Prof. Mills and his administration over same allegations Obasanjo levelled against the Jonathan administration. His wife resigned from the party to form her party the NDP and made Jerry Rawlings one of the founding fathers. After Prof's death, his attack subsided and graciously embraced Mahama onto the seat. Few years after Mahama's inauguration, the old order resurfaced. Just like Obasanjo in Nigeria, Rawlings predicted NDC'S defeat and accused the administration of massive corruption etc. He asked the NDC same question Obasanjo posed to Nigerians and the PDP- "Why are you scared of election defeat if you've done nothing wrong". He also expressed absolute confidence in Nana Addo that he will weed out corruption and prosecute all the corrupt officials in the erstwhile Mahama administration. Obasanjo described Buhari as a "Hard man", and Rawlings described Nana as a "serious person".

Obasanjo did not keep quiet when Buhari's abysmal performance began to show on the wall all over..he attacked the Buhari administration. He raised germane and serious issues including the mass killings of Nigerians by herdsmen across the country, the parlous state of the Nigerian economy, condoning of corruption by the President and people surrounding him, the Maina case. Babachir Lawal, was quickly arrested few days after one of Obasanjo's open attacks by Nigeria's Economic and Financial Crimes Commission, for a crime he allegedly committed years ago. Ghanaians are aggressively waiting for the founder of the NDC who is gradually becoming the Obasanjo of Ghana, to start adding his voice to the agitations emanating from all corners across the country. Ghanaians want the propounder of the Probity,Accountability and Social Justice principle to lead them in their anti corruption and social justice crusade. The challeges facing the nation go beyond NDC/Npp politics, we must join hands and fight in concert. Obasanjo has not hidden his disappointment in the administration he supported in their last election...he hasn't hidden is disappointment in the man he thought was coming to weed out corruption...he openly condemned the practice of nepotism in the Buhari administration. We are still waiting for the man who was once described as junior Jesus..the man who years ago made corruption unattractive in Ghana..the man whose attitude and utterances attracted the have-nots to his side, to condemn the massive corruption, arrogance, nepotism, cronyism etc going on under the man he described as "serious politician". The PDP and some civil society organisations recently commended Obasanjo for slamming Buhari...there are lessons to learn from Obasanjo's activities in Nigeria. Political pundits in Nigeria have already said that unless Buhari heeds Obasanjo's advice and make amends, without being deceived by sycophants around him,he may be the next name on the list of Obasanjo's victims. What about Ghana? Are we going to see Rawlings leading a crusade against the emerging dangers in our society? The reinvention of the negatives he fought against in the 70s and 80s? Less of the practices which necessitated killing of the Generals in the 70s etc. Civil Society Organisations who fought alongside Obasanjo to kick out Jonathan, have all joined the coalition agenda because of Buhari's abysmal performance and massive corruption in his administration. The PDP is likely to win the 2019 election...many rating agencies and political pundits have predicted same..what about Ghana? In one of his submissions on African politics on an international platform, Obasanjo equated the man he described as hard man and incorruptible, to Dos Santos of Angola. We are still waiting to hear how the founder of the NDC will describe Nana Addo after completing his personal investigations into the

1. Bost saga 1 and 2
2.The $2.25 bond saga
3.Appointment of 46 family members of the President into his administration

7.Payment of $30 million to the President's cousin's law firm to review government contracts

11.Purchase of the DKM office by an appointee of Nana

12. The over thousand oil marketing companies formed within one year

13. The $35 billion oil deal involving the President's henchmen and the Russians

15. Fake offices created at the NCA to facilitate diversion of state funds

16. In laws, former wives and cousins taking over our foreign missions

17. The high cost of living
18. Insults and attacks on Ghanaians by appointees of the administration