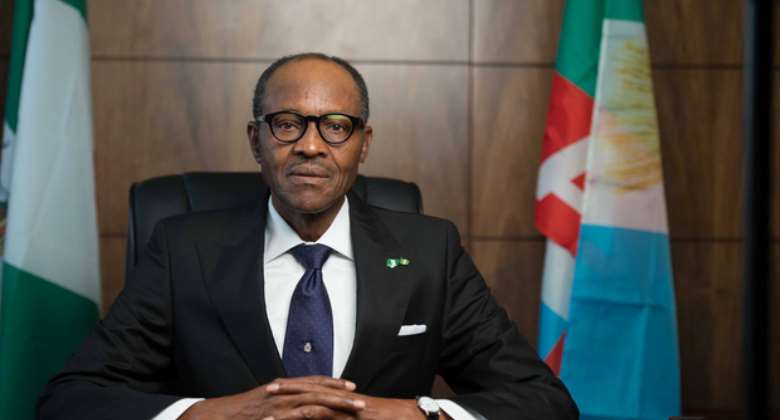 As somebody laments: "Why ridicule the wrinkles on a hand that forcefully opened a bolted door so that you can come in and take a seat at the table?" The Ewe version: literally translates as the one who fetches the water is likely to break the pot one day

Whatever interpretation one may derive from the two adage, one thing clear is that a helping hand may not necessarily be perfect after all. Thus a helping hand has its own flaws and weakness, and that at odd, we have to be tolerant and appreciative no matter how insignificant the offer or help might seem to us. That is why it is extremely difficult for me to understand Ghanaians unflattering reaction to president of Nigeria, Muhammadu Buhari's corruption fight resolve, comes as a surprise to me

Ghanaians in general are known to be peace-loving, law-abiding, hospitable and above all else very appreciative in nature. There may be few virtues by contrast with regard to Nigerian counterparts, but the bond between the two sisterly countries is completely unbreakable

Even in Diaspora, being human instinct to see a fellow African as a brother or a sister but the bond between Ghanaians and Nigerians is so robust that the difference to other African countries is conspicuous. Many Ghanaians, as l know of, are now married to Nigerian women and Nigerians to Ghanaian women too

Ghana and Nigeria have cooperated in many fields: ranging from mutually beneficial to retaliatory ones. Most Nigerians comfort and amuse themselves echoing the retaliatory expulsion of fellow Ghanaians in the 80s from their country. Expulsion that has become repertoire of constant 'stereotypes' but they are unable to link "Ghana must go" to subsequently pervasive economic woes in Nigeria. Needless to say that controled immigration is a source of wealth to a country

The two West African countries have worked in peaceful solution to the civil wars in Sierra Leone and Liberia. Recently, due to timely anticipation of a looming political crisis in Gambia, the prompt action by ECOMOG or ECOWAS ended up ousting Gambia's long-time military leader Yayah Gyameh and installed President Barrow. The Gambian mission would have been practically fruitless had not existed the historically long ago established cooperation of the leading two countries which ultimately resulted in Gambia success. Record abounds to attest to long existing bilateral relation between the two sisterly countries

In globalized world everything is interconnected, in that fighting organized crime requires collective effort from global players. Ghana cannot fight corruption successfully without counting on, at least regional players. It will require political will and coordination on the part of Nigerian authorities to repatriate Ghanaian for instance, being sought on corruption related charges. At least, it will need countries in the sub region to be on the check out for money laundering scheme, component of corrupt practices. There are several components of corruption that we cannot handle alone without other countries helping us. This is what Nigerian leader's message is about

Similar reaction or response was realized when Nana Dankwa Akufo-Addo, the President of Republic of Ghana, assured US authorities of Ghana's readiness and willingness to help them fight terrorism....All hell broke loose. Come to think of it - even with the short memory - the fact that we are currently hosting Gitmo 2 is a form of fighting international terrorism. Ghana is also in the 'Guinness Book' of sending troops to Somalia and Mali. Is that not a form of terrorism fight? So what is the doubt about?

Probably, we were unable to weave smoothly the paradox of Nigeria having higher corruption perception index compared to lower Ghanas. We couldn't make connection of possibility of Buhari's Government being helping hand here because of statistics. At times statistics is not nitty gritty reflection of reality hence the necessity to robe in wisdom. Why mock something when achieved will have tremendous impact on public purse protection?

I must state categorically that mainstream media houses have been professional in reporting Nigerian leader's preposition but the Ghanaian audience wasn't convinced a bit. This reflects poorly on us as people and will likely go to question our moral, ethic and intellectual capacity to appreciate the power dynamics corruption entails. President Buhari, despite his flaws, is on the record of retrieving large sums of money abroad stashed by corrupt officials abroad

Currently government led by President Buhari is prosecuting several state officials on corruption charges. He fired the head of Anti-Corruption Department in massive restructuring exercise to invigorate the functionality of it

Also, he is engaging in public education on corruption through seminars. One of which Professor PLO Lumumba was a guest speaker to conscientize Nigerian public specifically on corrupt practices. He didn't unbridledly take offense of David Cameron, British former PM's "fantastically corrupt" Nigeria tag, rather he solicited a help from former PM in fight against. And l think, those are good examples to follow.

As for politics, you cannot run from your own shadow because the reality is going to be glare staring into the face

The channel we used was the same channel Joy FM used to get ...
19 minutes ago