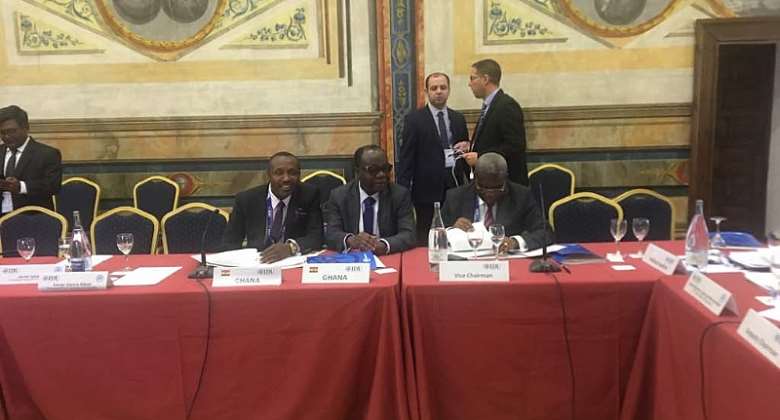 Mr. Peter Mac Manu, who doubles as the Honorary Chair of the Democrats Union of Africa (DUA) was re-nominated by the leadership of his Party, the New Patriotic Party (NPP) to vie for the position.

His re-nomination was a result of his confidence the Party has had in him given his exceptional experience, sterling qualities and hard work which is reckoned to have given a great boost to the working of both local as well as the international union.

The IDU annual Party leaders conference took place in Madrid, Spain. It brought together Party leaders of all the center-right political parties in their alliance across the world.

The meeting served as an occasion to elect into office members of the Board of Executive Committee of the IDU and to discuss and take stock of it programs, activities and general core mandate of the Union.

The New Patriotic Party (NPP) was represented by the capable National Chairman, Mr. Fredrick Worsemao Armah Blay, the General Secretary, Mr. John Boadu as well as the Director of International Affairs, Mr. Emmanuel Attafuah-Danso who threw their weights behind the nominee and gave him full support.

The Exceptional support in effort of Messrs Fredrick Blay, John Boadu and Emmanuel Attafuah-Danso is worth commending.

The youthful political genius, Mr. John Boadu, the General Secretary made a solid presentation about the state of the party (NPP) which attracted massive commendation. He really placed well the Party (NPP) on a world map of International politics.

The Ghanaian delegation was led by the affable Hon. Fredrick Worsemao Armah Blay, the Acting National Chairman of the Party.

We also appreciate and owe debt of gratitude to all sister party members of the IDU and DUA, who supported this worthy cause of Mr. Mac Manu’s nomination and re-election.

Finally, we extend our congratulations to Mr. Peter Mac Manu the IDU, DUA and the entire rank and file of the NPP for their continuous support.

Instructively, the role of H.E the President of the Republic, Nana Addo Dankwa Akufo Addo in supporting the nomination and re-election of Mr. Mac Manu is very much heartwarming and commendable.

The Problem of Presidential Travels and the IMF
3 minutes ago