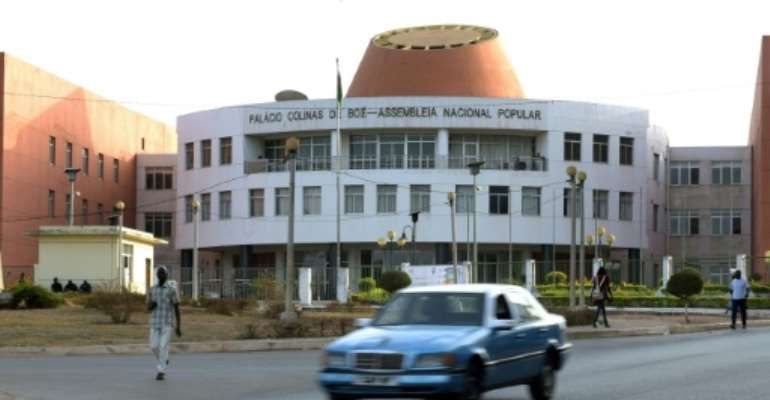 The National Assembly of Guinea-Bissau, where a political impasse has lingered since 2015. By SEYLLOU (AFP/File)

West Africa's regional bloc has slapped sanctions on 19 lawmakers and associates of the president in Guinea-Bissau, including his son, over the continued failure to end a political impasse, a statement said Tuesday.

The impoverished West African nation has been in the throes of a power struggle since August 2015, when President Jose Mario Vaz sacked then prime minister Domingos Simoes Pereira.

A faction of 15 lawmakers in the African Party for the Independence of Guinea and Cape Verde (PAIGC) has broken away in support of Vaz while the majority backed Pereira.

The sanctions, including a travel ban and a freeze of bank accounts, were signed on Sunday by Togo's President Faure Gnassingbe, who is current ECOWAS chairman, and released on Tuesday.

The restrictions target eight of the 15 rebels who back Vaz, six lawmakers from the opposition Social Renovation Party (PRS) which has propped up the president in parliament, and five people close to him.

His son Emerson Vaz, a businessman, was one of those named.

Talks mediated by Guinean President Alpha Conde in October 2016 had led to a deal aimed at naming a new prime minister respected by all sides, with a view to organising legislative elections.

But little progress has been made towards the points laid out in the so-called Conakry Accord.

ECOWAS took the decision due to the long impasse and after security forces blocked PAIGC members from holding a party congress.

The naming of a new prime minister, Augusto Antonio Artur Da Silva, at the end of January was not met with satisfaction by ECOWAS, who decried "the failure to appoint a Prime Minister of consensus", as Da Silva was appointed by decree.