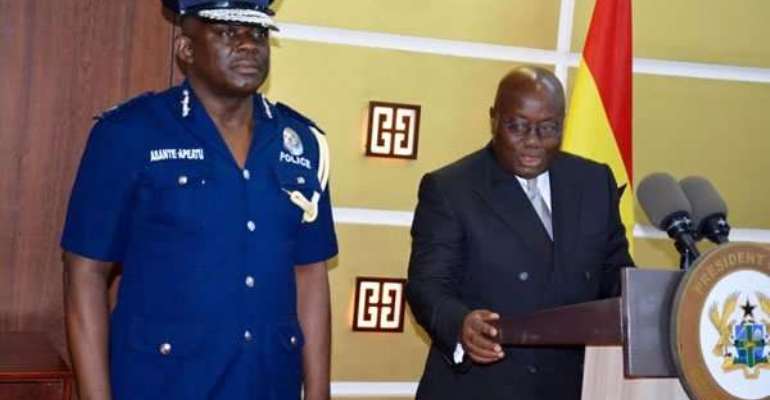 Your life as a successful person in Ghana is in danger because you will be the target of armed robbers.

Your protection is in danger because the police are robbing the state of funds that will have been used to employ additional police officers and purchase ammunition for the police service to enable them to defeat armed robbers and other crime in the society.

My condolence to the family of inspector Emmanuel Ashilevi

State Robbers
As I seat in the Trotro from Chorkor to Nima, I was enjoying the atmospheric air blowing through my window until I try to look to pay the mate my fare, I was quickly blow by the fumes of akpetese (local alcoholic drink) from angle of the driver directly into my nose, eiii driver wabu(you are drunk). I was very curious to know, so I asked the driver why are you drinking and driving, do you know is a crime? The insult I received for my answer, hmm. He said at a point that "masa you are free to get down if you want, go and buy your own car and do not use Trotro again" the passengers in the minibus were all laughing at me.

The way he was driving one could tell our lives were in danger, but our attitude as Ghanaians is that everything is in the hands of God. As I look ahead I saw two police officers standing by the road checking drivers, at this point, I said to myself thank you, God this driver will be arrested, to the surprise of other vehicular users our driver did reckless overtaking that nearly caused accident he was trying to prevent the police from checking him.

The police have just robbed the government of Ghana some money from traffic offenders fine, the robber police officer, is unable to process the offended driver to court to enable the court find him and generate money enough to resources the police against their biggest enemies(armed robbers). So to the police officer especially MTTU 1Ghana is precious than their lives.

Today Ghanaians wake up and the enemy has attacked. I open my phone and I was welcome with armed robbers attacked a police station, kill a police officer and free 7 armed robbers. The questions many Ghanaians are asking; WHY SHOULD ONE POLICE OFFICER BE STATION AT A POLICE STATION?

WHY WAS THE POLICE OFFICER NOT ARMED?
As usual, I am expecting Ghana police to come with answers that we all know; we do not have enough police personnel and government cannot recruit more.

We do not have enough resources; we lack ammunitions and Close Circuit Television (CCTV) cameras to defeat armed robbers.

My worried is the police are their own enemies because they raise money with their police uniform into their individual pockets and directly robbing the country of the needed funds that will enable the government to recruit young men into the police service, to buy ammunition and also mount CCTV cameras across every police station across the country for their safety.

My Gift to IGP and Director of Immigration
The national identification registration is the gift I have for the two high-security heads; they should put all their security intelligence into uprooting criminals in Ghana. In future armed robbers will attack individual policemen in their homes, at the funerals, at the church and other places off duties because they see police officers as their biggest threat. If Ghana police take a critical interest in nation identification registration in collaboration with immigration service every individual that has been registered and given the ID card, should be asked to register with the police station in their residential area, this will be known as Residential Registration. Ghana police, Immigration service can also create another department called Residencies Registration Department in every area or sub-metro and district council to register residence in that particular area. The landlord should be given a log book and the landlord should take the log book and fellow the tenant to be registered and sign to confirm that this particular person lives in my house.

Therefore the police can randomly ask people to show their residential ID those who do not have should be interrogated since armed robbers and criminals operate in different areas or will run to a different location whenever they operate in robbing. Example when armed robbers rob in Accra the may run to Tamale village to hide for some days. Therefore with everyone one having registration ID, it will be easy for police to identify strangers in their territory, therefore restricting the movement of criminals and putting fear into the activities of criminals.

The 2cedis collect from traffic offenders should stop and rather process offenders to court and offenders will pay money to government or Ghana police to enable police generate funds to mount CCTV cameras in every police station in Ghana and connect it to all district and regional police headquarters so that they can all be watchdogs among themselves to enable them reinforced anytime there is external attack.

Your life as a young successful person is in danger and your rich dreamer's dream will fall apart.

IGP my gift for you, happy new ideas and thank you for the protection, Immigration monitor foreigners for our safety.

I call on Kwame Safe Kayi of Peace FM, Anas Aremeyaw Anas of Tiger Eye, Manasseh A. Awuni of Joy Fm Etc to use their platform to protect the young successful youth dreamers from armed robbers and state robbers.