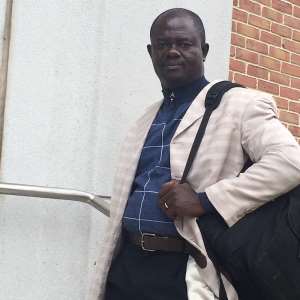 What am I hearing from John Mahama and his cohorts regarding Trump’s utterances or what people consider as insults to Africans and other Caribbean nations? That Donald Trump should apologize? Apologize for what? Folks we should be serious for once. If you play the music and someone steps onto the floor to dance, do you really blame the dancer or the one who played the music?

Do you think that Trump would say the same about South Korea, and the other Asian tigers? Hell no!! He dares not. For decades, leaders like John Mahama, Eyadema, Mobutu and etc. have misused African resources on unnecessary and unimportant projects and programs to the detriment of the mass of the African people. The resultant effect is that, African citizens do not have any hope in their respective home countries and have scattered all over the globe doing filthy jobs and other menial jobs, a phenomena we call “seeking greener pastures around the world”. What then do you expect Trump to say about Africa? Heaven?, beautiful Africa? Developed Africa or what?

It is very hypocritical for any African leader to demand apology for what essentially is the truth, or is it because it came from Trump that we are so pissed off?

Just tell me how many EU leaders or even ordinary politicians have bank accounts in Africa or even properties in Africa? Which American President has ever put his wealth in any African bank or country? On the contrary, what do we see among African leaders; almost all of them have accounts in either America or Europe or more recently Dubai. Leaders like John Mahama have stolen and continue to steal the resources that should have been used to develop Africa and put these resources in Europe and America where they use such resources to develop their lands and latter give us loans and aid out of these same resources that were stolen from Africa. Are we, therefore, not stupid and deserving of Trumps’ description of Africa as shithole? Have we not made our own continent useless?

When I hear of people write or talk about how Europe underdeveloped Africa, I often retort, that was then! What about now? Why don’t we talk about how Africans are now under developing Africa!

George Bush once said, “You fool me once, shame on you, you fool me twice shame on you but you fool me the third time, shame on me” We ourselves have created the description and Trump is just calling out what we ourselves have created. What then is our beef? I think we should do ourselves a favor by accepting that in good faith and make strenuous effort to change the image of Africa as a beggar continent, a continent full of rich resources that has been mismanaged for decades.

By every measure and index, Africa should have been the richest continent on earth which should have been giving aid to other nations instead of being the number one aid recipient continent. We continue to pride ourselves as very wise people, yet we lack knowledge to harness our God given resources for the betterment of our lives.

How many times have the west taken guns to overthrow any government in Africa directly? They only use our own people against us, and in the end, we ourselves help them to overthrow good leaders and then they come in, to siphon our resources into their countries and use them to develop their own countries, thereby leaving us with civil wars, hunger, deprivation and possible migration into their countries for greener pastures. Tell me, if we ourselves have not made Africa a shithole.