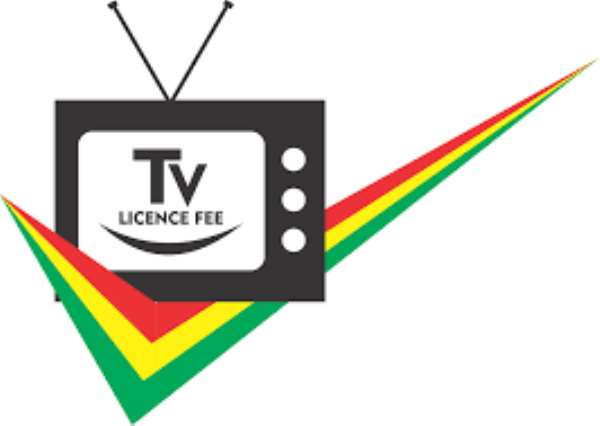 In achieving these noble ideals, the best approach then became making the ultimate beneficiary of the best result out of decent broadcasting, to pay for the services of thr national broadcaster which became the citizen, through direct taxation. This then make the broadcaster to be financially independent and accountable to the citizen by its service provisions. In fact, the national Broadcaster is not expected to raise revenue from any other sources than from the citizens' TV licence fee. This citizen is in turn, expected to pay by the quality of his development and sense of security.

Ghanaians in their millions are defying the call on them to pay TV licence to the national Broadcaster, as demanded by law. The law on the payment of TV licence fee is not new to Ghanaians. The law has been in place for some time, as it does in almost every one of the 15 member states of ECOWAS (Economic Community of West African States).

Since the payment of TV licence fee is a form of tax by the state to levy specified amount on citizens for owning and using TV set, the payment of the tax has nothing to do with whether a citizen who own the set, watches the state TV programs or not. It's purely about taxing the citizens to pay for the national information service because of the critical role of information control to national security and development. One is then force to ask for why citizens of Ghanaians have problem with paying for the national security and development which is part of a citizen patriotic duty?

Prior to the introduction of VAT (Value Add d Tax) in the taxation system of Ghana, personal income tax and export of national resources, form the main budget of Ghana. The domestic industrial base was so small and formal employment was not tat high. Thus, the national Broadcaster is catered for from the national annual budget with the hope that its role will evolve the Ghanaian into a more productive being. The introduction of VAT was necessitated by the need to make up for the shortages in national revenue, to meet up with all national commitments, when demand on state expenditure was gaining mumentuim over revenue. So as salaries and cost of running the state grew, the budget become over stretched, calling for other sources of revenue, as our national income fall short of expenditure.

The national Broadcasting service then become a challenge as budget allocation to it shrink. The broadcaster then started to struggle with its meagre in meeting up with its critical responsibilities of national security and development. This challenge even became worse with political instability, as cronyism, nepotism and ethnocentrism became rife in the affairs of the national broadcaster. The transition from our state national broadcaster's era of monopoly, to an era of deregulation of bradcasting in Ghana, also came with its own challenge. The big fish is no more alone in the pond.

These changes in Ghana, coupled with the increasing cost and competition in the media, gave the national Broadcaster no any other choice than to resort to the 1960s law on revenue. The TV licence law was activated, to keep up with its mandate and national responsibilities.

Informations we said, is the most critical factor in the development of a citizen. Thus, the kind of information citizen consume define the focus of what they invest their energies on. Information defines a people's culture. Information shed clearer light on a people's sense of their history, explain the state's laws to its people, uncover the genuine politicians, strengthen the institutions and the define the traditions that best serve the national interest. Information. clear all ambiguities around the five core elements of a people's culture. It shape how a people must understand their challenge and how to solve it. So the poorer the information a people gets on a challenge, the worse the end up trying to solve it.

The heap of unresolve challenges facing the Ghanaian today, says a lot about the kind of national broadcaster we have. If today, we have millions of Ghanaians poorly inform and therefore still undeveloped enough to be capable of producing their basic modern manufactured needs, then the work the national Broadcaster has done over the years, is unhelpful.

The average Ghanaian today is misinform by the national broadcaster into understanding his crude indigenous past as the most important thing in his life, when actually the broadcaster itself need modern imported items for broadcasting information, the poorly educated Ghanaians are incapable of producing. How consistent is this? The national broadcaster disguising under misunderstood version of culture and tradition, engaged the minds of Ghanaians on information about irrelevant items that have no bearing on the modern day needs of the Ghanaian.

The worse is, the Ghanaian national Broadcaster has degenetated to a state of inviting fake witch doctors, quark religious related practioners and what have you, in the name of tradition to mislead Ghanaians. Our national broadcaster removed itself from the responsibility of ensuring genuine information content, and left the vulnerable citizens to fish out the right and wrong content.

Our national Broadcaster become a medium of marketing fake medications, with all sorts of questionable claims, to mislead Ghanaians into believing and consuming dangerious items. One even question whether GBC is now own by religious and ethnotribal bodies, when the state of Ghana is suppose to be more of a secular state, as possible.

Hardly anyone in Ghana, who is not a lier, thanks to our GBC. Children in Ghana grow watching GBC feeding the entire population with all sorts of lies, in all forms imaginable. Our national broadcaster has has reach the peak of throwing trust to the dogs, as anarchy reigns amidst free for all lies. GBC even invite public sector worker, including highly place state security personnel and politicians, to misinform Ghanaians. Again this is done, without the authority playing the role of ensuring right thought provoking questions in safeguard the concerns of the TV licence fee, are fully exhausted.

In fact millions of Ghanaians like my humble self, rather have their families to watch 1960 Sesmi Street, than waste time watching or listening to the programs of our national broadcaster.

In proceeding from here, it's important to point out that the rebellious stance of the Ghanaian is not just to the national Broadcaster but to all our state services by law, whose role are not reflective of the quality of life of the Ghanaian. All the citizens are saying is, they are tired of paying public sector workers for doing nothing. We are tired for paying people to develop us into those capable of living as masters of our destiny, and all we get for paying is, daily increase in our sense of insecurity.

We are now between the devil and the deep sea. We cannot afford to exist without our national Broadcaster, as a critical part of our national development and security. We are however too poor to be paying fraudulent cash cow who are pretending to be empowering us into productive people.

We are therefore at a cross road of either paying for business as usual, or standing up to device a mechanism fit for progressive people.

The BBC (British Broadcasting Corporation) was once right in the same soup we are today, but has now moved on. It will therefore be helpful to get the honest brains to study the BBC approach, to wriggle us out of this embraglow. It is only by this effort that the frustrated Ghanaians can recandle his trust in the National Broadcaster.

Your God-fearing attitude, refusal to tenaciously cling to p...
44 minutes ago