Ghana Immigration Service Asked To Sit Up: Are Nigerians Resident In Ghana Pushing The Trouble Button? 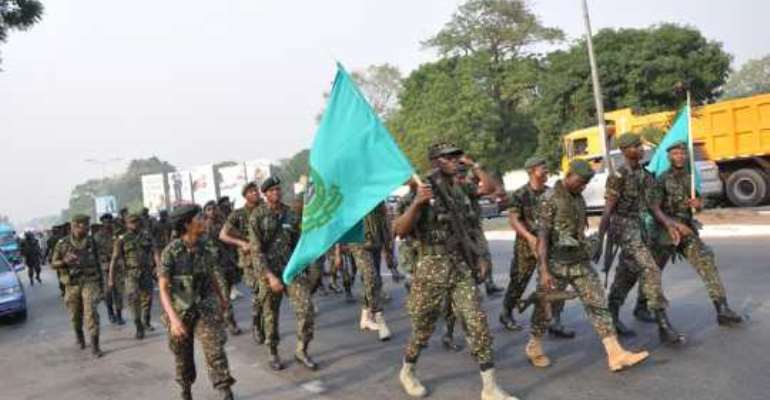 The sages couldn’t state it better: ‘You don’t throw stones if you live in a glass house’. And ‘you don’t cut the hand that feeds the mouth’. Why would someone do that one may ask. Ironically, not everyone gets it. In fact that wise saying sounds nonsense and gibberish to the ears of a folly.

See, the folly fools around without recourse. He’s like a rogue that’s no mercy for his neighbour and even when trouble gawks him in the face he sees nothing until he’s hammered by trouble. Unfortunately, when that happens, guess who bears the brunt. It’s the innocent and law-abiding citizens that suffer for his reckless act.

This is why someone is ringing the alarm bell. Supposedly, this is what responsible and good citizens must do to stem mayhem and troubles. You don’t wait for them to grow horns or escalate.

A concerned Nigerian resident in Accra Ghana has made a passionate appeal via social media to the Ghana Immigration Service (GIS) to do something about the influx of Nigerians to Ghana, especially those coming through the Aflao border from neighbouring Togo. The eastern corridor has become a hotbed for nocturnal activities.

Is this guy just snitching his fellow Nigerians?

Or he’s giving the Ghanaian authorities a heads up for a potential danger?

On the morning of Friday January 5 2018 the man said he received a-three-minute 48 seconds audio from a brother that purported that trouble was brewing at Ofankor a suburb of Accra in the Greater Accra region. The incident involved two guys --a Ghanaian and Nigerian. According to him the two were arguing over a woman and it appeared the incident ended tragically, as the Ghanaian was stabbed in the process by the Nigerian.

“He stabbed the Ghanaian with a bottle or knife and I don’t know whether he died or not,” he narrated.

There was also an accompanied image of a battered female black-eyed. She’d had her pretty face either knifed razored. But the narrator didn’t make any reference to it. She must be the lady at the centre of the furor.

And he was very uncharitable with /about his words for his kinsmen.

“I’m so disgusted and I’m tired of this nonsense. Must you be in Ghana?” he quizzed. I’m a Nigerian... I’ve invested here…I’ve a family, I came here to live. If you’re an idiot, if you’re cursed then go back to Nigeria and die there. Your country is being held by a political thread….we don’t even know what’s going to happen. And you’re here in Ghana you won’t comport yourselves and behave yourself properly like a human being. You come to another man’s country –you’re stabbing him and drugging his woman. You’re breaking bottle. Are you mad?

Does anybody remember the underwear bomber?
On Christmas Day 2009 Umar Farouk Abdulmutallab (a Nigerian) popularly known as underwear bomber was on a suicide mission courtesy of AL Qaeda and its affiliates. He’d planned to detonate a bomb on a civilian airliner carrying 289 passengers en-route to the United States. Umar’s father a successful banker I learned had warned the US Embassy in Nigeria that his son was sup to no good and shouldn’t be given a visa to travel. However, the embassy ignored the warning and the African brat kid set forth until some Dutch brave men onboard the airplane managed to foil his wicked plot.

Are Nigerians resident in Ghana pushing their host to the wall?

Maybe Ghanaians themselves haven’t realised that. Maybe they still have enough of their well-known patience and tolerance saved at the bank. Maybe the cases of abuse, harassment and knifing aren’t widespread. Or maybe just maybe the host nation wants Nigerians themselves to tell their own story so that when the untoward erupts tomorrow (God forbid) the blame would go squarely to them.

I think the concerned Nigerian has said it eloquently, this wanton attacks by Nigerians, if not controlled has the potential to cause or spark xenophobic attacks across Ghana. “Let’s not push Ghanaians to the wall. Fellow Nigerians we’re pushing Ghanaians too much to the wall. I hope we can handle it when it bounces on us,” he warned.

And I think that’s where we find ourselves now who’s coming in and going where? Border patrols must be keen and rapid since we may not have full proof records of ECOWAS citizens visiting from sister nations. I think member states must be privy one's criminal record .who is travelling as what -- a tourist, an entrepreneur or businessman, a student etc..?

That said I now understand why ECOWAS citizens have some limitations to their right as enshrined in the free movement of Protocol. That perhaps suggests that the Community doesn’t have the teeth or resources to police its permeable borders. May I play the Devil’s Advocate here: Does ECOWAS have the resources to deal with its internal problems and can it respond rapidly if there’s regional problem?