African Community In Spain Demonstrate Against Slavery In Libya 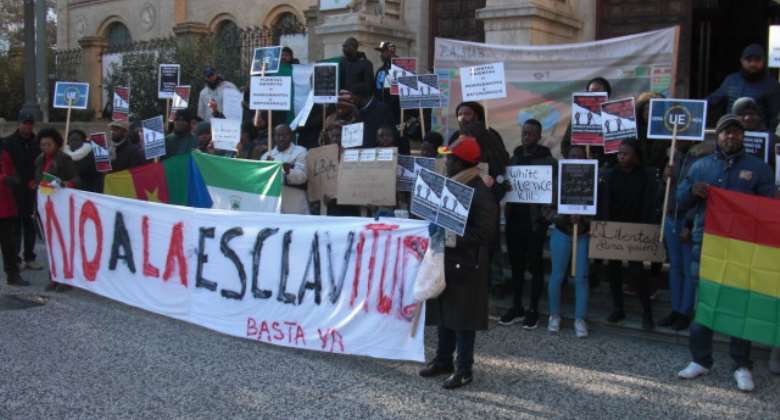 STOP THE SLAVERY IN LIBYA!!!
The African Unions, in Zaragoza Spain, held a peaceful demonstration recently to express disgust at the modern day slavery happening in Libya.

The countries that participated in the demonstration included various groups from Ghana, Nigeria, Senegal, Guinea, Ivory Coast, Togo, Benin and Cameroon. The demonstrators were about 200 in number.

The demonstration started from the Plaza Paraiso with the city police to guide the demonstrators through Paseo de la Independencia heart of the city.

Also in attendance were all the presidents of the various country unions and associations and executive members.

The Ghana Union was led by its President Madam Janet Parker with the Deputy Secretary, Mr. Alfred Owusu and the Deputy Organizer, Mr. Lamptey J. N.

The demonstration ended at Plaza España and various statements were read in 3 different languages Spanish, English and French.

Here is an extract of the English version:
Today is a sad day for humanity, but even more so for Africans; We are hurt and we feel raged, for our black brothers and sisters sold and killed on Libyan soil.

It is appalling that humans are sold into slavery in the 21st century.

But today! As one people without borders, nationality, and ethnicity,

We demand an African solution to the captivity in Libya!

The chain must be broken!
Africa is holding her head high to say enough is enough!!!