President Nana Addo's Interview On Aljazeera And The Question Of Homosexuality! 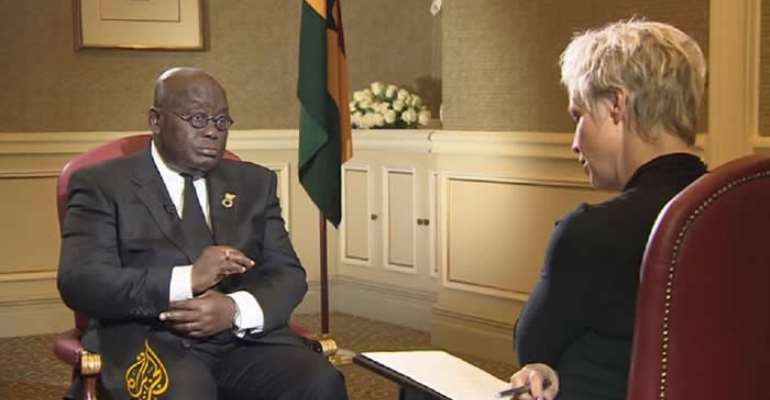 To begin with, the purpose of this writeup is to put into proper and clearer perspective the responses of our President to questions on homosexuality that were posed to him in his interview with Jane Dutton of Aljazeera and its far reaching implications on the Culture, Traditions, conscience and the general well-being of Ghanaians. This has become urgent as a result of various two-faced attempts by Members of the NPP's Communication Team to tweak and whitewash the President's answers after they appeared to have suffered a backlash at home ! This futile effort to assuage the anger of most Ghanaians who have been taken aback or peeved by the President's solicitous attitude to Homosexuality has however hit a snag as most right thinking Ghanaians continue to berate the President for having a soft spot for Homosexuality - a sexual orientation that is not only alien to the Culture and traditions of Ghanaians but also seen as anathema.

Permit me to state in no uncertain terms that Ghana has three predominant religions - Christianity, Islam and of course the African Traditional Religion and all these Major Religions abhor Homosexuality. The same abhorrence for homosexuality hold true for the sprinkles of other World Religions that have began to penetrate the Shores of this Country to set Camp in their proselytizing mission, notably: Eckankar , Hinduism, Hare Krshna etc.

Ladies and Gentlemen, the point I am trying to ram home is that all the Religions that Ghanaians profess to treat the issue of Homosexuality not only with disdain but utter repugnance ! It was therefore incumbent on the President to take these considerations into cognisance in addressing the question of Homosexuality in his interview on Aljazeera.

The incumbent President should have stated the express position of Ghanaians, just as his predecessors, John Mills and John Mahama did, that homosexuality is a sacrilege that will never be countenanced by his people any time soon ! This needless to say should have been the response of a man who has vowed to be President and Father to all Ghanaians notwithstanding their religious and political persuasions. A truly representative democratic President must always tout the Majoritarian voice !

Just as the Monkey pet said he is not as indignant at the one who is carrying him shoulder-high as he is at the by-standers pointing accusing fingers at him just because he is a monkey : in the same vein, I am not as incensed at the President for making such pro-homosexual statements as I am at those who are declaiming that the President's remarks were tenable on the basis of HUMAN RIGHTS !

In the first place, a question of human rights cannot arise here on the basis of an illegality! In other words, since homosexuality is frowned upon by both the laws and religions of this Jurisdiction the issue of human rights for homosexuals is a non-starter ! Invariably, something has to be legal or lawful before one can press for the unfettered rights that go with it. If "unnatural carnal knowledge" is proscribed by the laws of this Land and we all know that homosexuality ostensibly leads to the committal of "unnatural carnal knowledge" then it stands to reason that sine qua non homosexuality is a crime and for that matter a person who indulges in it is a criminal! So, wherein lies the justification in the claim that as a human rights lawyer Nana Addo was well within his rights to make remarks that appear to condone homosexuality!

Ghanaians and for that matter Africans must avoid the mistake of equating human rights with the dictates or laws of the imperial powers !

For the first time, Africans must resist with all the strength we can muster this Western design to foist Homosexuality on us in the name of human rights. Our leaders must know we are prepared to collectively starve for the preservation of our Culture and Tradition for the sake of posterity ! After all, upon all their aid and grants and loans and all , we are still a starving bunch!

Besides, legalization of homosexuality holds dire prospects for the health and well-being of Africans . Statistics from the Western World where homosexuality has been legalized indicates that HIV/AIDS and other STI's are rife in homosexual Communities , in spite of the high levels of education and awareness in those Countries . If this is not frightening enough then the knowledge that most homosexuals also engage in heterosexual relationships should cause goose bumps! What this simply means is that gays and lesbians do cross "carpets" to engage in heterosexual relationships and with the high incidents of sexually transmitted diseases among homosexuals the danger to all of us is ominous.

In Ghana for instance, the case of Dr Ali Garbass who sodomised a teenage boy and the ordeal the boy had to go through is still fresh in our minds! We are told that not only did the boy contract HIV/AIDS but also has difficulty sitting on his bottom among a host of other health issues and inconveniences! However, Dr Garbass was not lynched but made to face the full rigours of our laws as he is now languishing in jail. That is the spirit and the true definition and enactment of human rights !

With a health system that is in a shambles and with a crumbling National Health Insurance Scheme superintended by the NPP government, I cringe to think about the state of our health system if homosexuality is legalized with its concomitant health "hazards" like faecal incontinence, anal cancer etc! For me, there is an ulterior motive behind attempts by the West to compel us to legalize homosexuality. I can see the invisible hands of the same few filthily rich homosexuals who are pressurizing their governments to make homosexuality a condition for grant and aid. With the high levels of grinding poverty in Africa, their intention is to make Africa the hub for homosexuality where they can easily prey on poor citizens who will be willing to barter their butt for some bucks! OR PERHAPS, A COMPANY IN THE WEST HAS PLANS TO EXPAND ITS PAMPAS PRODUCTION !

Permit me to reiterate the point with all the emphasis at my command that in Ghana unlike some notable African Countries suspected homosexuals have never been persecuted , molested or victimized! Ghanaians have fellow feelings for all calibre of persons but we will never allow that empathy to be abused by homosexuals under the guise of human rights.

At this juncture, I would like to delve into what exactly President Nana Addo said in that feckless interview and its implications for all of us. Against this backdrop, I have a bone to pick with those who deliberately want to throw dust into our eyes by maintaining that the President's remarks did not in any way encourage homosexuality.

"This is a social, cultural issue, I don't belief that in Ghana so far a sufficiently strong coalition has emerged which is having that impact on public opinion that will say 'change it, let's now have a new paradigm in Ghana' "

The meaning and intention of this quotation is self-evident and self-explanatory. Our President is saying without mincing words that homosexuality is not yet legal in Ghana simply because there hasn't emerged a strong coalition that would lobby and push for its legalization. What his words indicate further is that Nana Addo is willing to accept with resignation pressure from homosexual activists to legalize it left unto he alone. Isn't it unfortunate that our President has no qualms about the practice itself and he even had the temerity to add that "it is bound to happen" ? Is it bound to happen because normal people will convert to the perverse practice or homosexuals would form a coalition and press for its legalization? Or better still are Ghanaians now going to be born as homosexuals for it to be "bound to happen " or are we going to adopt the homosexual lifestyle through Western influence? These are legitimate questions that only Nana Addo can help us answer ! He needs to come again !

Nana Addo further asserts that " I grew up in England at the time that homosexuality was banned there. It was illegal and I lived a period where British politicians thought it was an item not to even think about. But suddenly the activities of individuals and groups, a certain awareness, a certain development grew and grew stronger and forced a change in law. I believe that those are the same processes that will bring about changes in our situation."

I have decided to quote the President extensively so that even the doubting Thomases will be able to track the course of the President's pro-homosexual comments. It is extremely disturbing that His Excellency Nana Addo sees homosexuality as a "certain awareness" indeed ! The President's conclusion that the same processes that led to the legalization of homosexuality in Britain will also happen in Ghana is not only fallacious but patronizing. Ghana and Britain are Nations with different if not diametrically opposed Cultures, Traditions and World views ! And for that matter if their politicians allowed the activities of "individuals" and "groups" to push the homosexual agenda down their throats, it is not enough for our president to conclude that homosexuality is bound to be legalized in Ghana because Britain has done just that! Where is our independence of thought, Mr president. Let us imagine that the tables had turned and homosexuality was legal in Ghana but illegal in Britain : could Ghana influence Britain to legalize homosexuality in this case? Impossible ! The inferiority complex has to stop ! It is high time we resist the lock, stock and barrel adoption of Western lifestyles - lifestyles the West itself has regretted ever adopting !

Our president's remarks have given impetus to the few perverse homosexuals who were lurking in their holes to now come out to form "coalitions"! As the great general Mosquito aptly put it Nana Addo is teaching homosexuals how to fight for its legalization.

Suffice it to say that studies have shown that in Countries where homosexuality is legal there is a colossal regret among the generality of the population for ever allowing their politicians to take them down that road. The point needs to be emphasised that in those Countries the legalization of homosexuality was an agenda that was pushed through by filthily rich Gays and not the decision of the Citizenry. If there is a referendum in those Countries today I am sure they would gladly jettison homosexuality.

Fuel price hikes: When did you realise you don't control oil...
8 minutes ago