The Tragedy Of Robert Mugabe 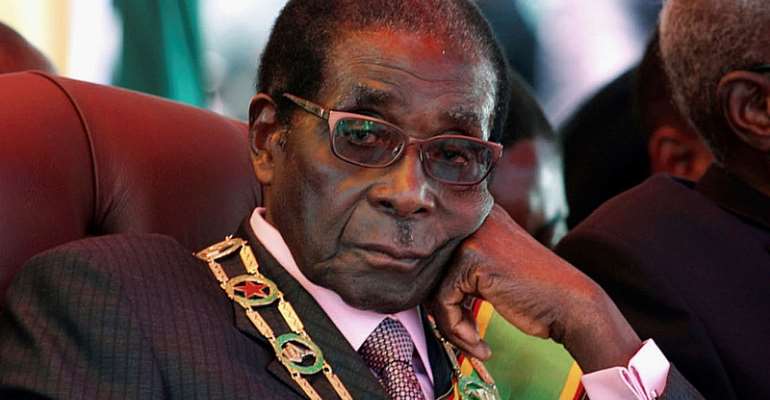 Reader, I am not a pastor, but the tragic story of freshly resigned Zimbabwe President Robert Mugabe can best be explained in Exodus, Chapter 1 verse 8:

“NOW THERE AROSE IN EGYPT A NEW KING WHO DID NOT KNOW JOSEPH….”

Time, truly, changes.
Reader, maybe, like most Zimbabweans, in 1980, you had not been born, but I was, then a young lieutenant in the Ghana Army, fresh from Sandhurst, UK.

In the years before 1980, back in Legon, radical student leaders, waxed eloquent about the nationalist struggle in Southern Africa.

Let me orientate you properly to the environment. The weather in Southern Africa is almost like Europe, with winter, spring, summer and autumn. The white colonial masters were content to exploit the land and treat the natives almost as animals. They settled there, seized the land by force and enjoyed the highest standard of living in the world.

With Kwame Nkrumah's freedom struggle in Ghana, the torch of freedom was lit all over Africa and nationalists rose up. In Northern Rhodesia, named after explorer Cecil Rhodes, Kenneth Kaunda led his people for ZAMBIA.

Several leaders rose up to challenge Ian Smith, but most of them were fifth columnists, like Joshua Nkomo, Rev Ndabaningi Sithole and others.

One of the genuine nationalists was young firebrand, ROBERT MUGABE who was incarcerated, almost like Nelson Mandela, broke jail and came to live in Ghana, seeking shelter under Kwame Nkrumah's freedom movement.

Mugabe, in the process, married a Ghanaian girl, Sarah, then, went to Mozambique and launched an armed struggle, through guerilla warfare.

The only language the white supremacists understood was VIOLENCE and Mugabe gave them no rest. The more the guerillas gained grounds, the more Ian Smith dined with quasi collaborators, until finally in a bold attempt to solve the problem, the British Government set up the Lancaster House Conference in London to bring all factions to the round table.

The talks led to peace, general elections and President Mugabe, the guerilla leader brought his lieutenants to the nation, called ZIMBABWE, and the capital renamed HARARE.

There is no doubt that in the early 1980's, President Robert Mugabe was one of the most popular African Leaders worldwide. With him in control of Zimbabwe, the last frontline remained apartheid South Africa, and the bell started tolling to the racist regime.

As at the time of 1980 when Robert Mugabe took power, Zimbabwe was one of the most prosperous nations in Africa, of course, built with black almost slave labor. The currency was strong, food was no problem, and industry was booming.

Were Mugabe and his ZANU – PF socialists? Or Communists? Or simply nationalists?

Professor Adu Boahen , as NPP Presidential Candidate, said something I always remember: “The business of Government is GOVERNANCE, not business”.

Allow market forces to dictate the pace of economic growth, tax the rich to raise funds to develop the countryside, ensure law and order to protect private property – reader with responsible governance, where leaders are accountable to the people, you will be on the high way to national development.

Not so, in Zimbabwe. Just rhetoric – seize the lands from the whites, seize the factories, let the state run the economy………………..and answer everything simply by saying we the blacks are now in power.

Power corrupts, and absolute power corrupts absolutely. Robert Mugabe, almost a law unto himself, with his band of hard core guerilla commandos, amassed so much wealth by Iooting the state coffers.

The situation got so worse that today as I write, majority of the people of Zimbabwe live below the poverty datum line all due to nothing but BAD GOVERNANCE.

One man, increasingly getting older, in power for 37 years, not learning anything from Nelson Mandela who ruled for only four years and retired to live as a great respected statesman; Father of the Nation.

His Ghanaian wife Sarah died, and he married his one time secretary, Grace, who, like some wives, notably the legendary Cleopatra, wanted to be the Commander of Commanders. She used bedroom influence to get her husband to sack one of his long time guerilla allies, the Vice President, so that, with time, the wife can succeed him as new Vice President.

A calculation gone wrong.
The military, commanded by former guerilla leaders, could not bring themselves to stage a classic coup to kill off Mugabe and take power but they flexed their muscles in support of the sacked Vice President and set in vogue a trail of events leading to the forced shameful resignation of Robert Mugabe as President on Tuesday 21st November 2017.

The news of the fall of Mugabe rocked the streets of Harare. It awoke the nation, as if a new fresh air was blowing across Zimbabwe.

What they see daily is suffering, shortages, hunger, unemployment………..they are a generation who did not know Joseph.

I did history in sixth form, Achimota School, and our history master told us: “The tragedy of history is that people do NOT learn from history”.

Robert Mugabe did not learn anything from the crisis in Senegal, the forced escape of Blaise Compaore from power in Burkina Faso, the killing of Gaddafi in Libya………. “This is Zimbabwe. Here our story is different…………”