...As the two are in a chat mode in an unknown setting
By Gordon Offin-Amaniampong
Feature Article 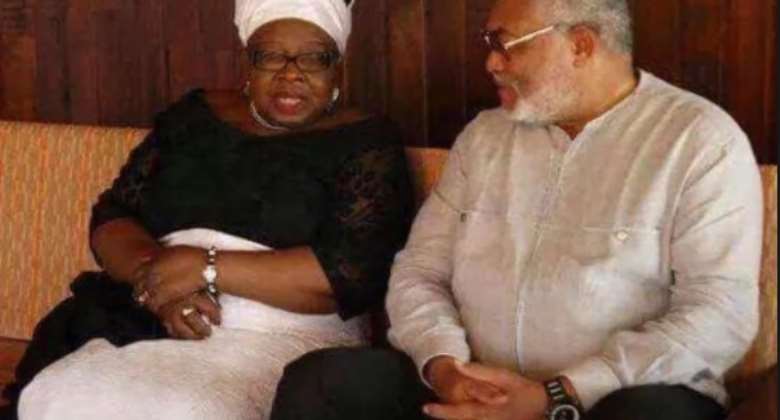 How did they do it?
Gordon Offin-Amaniampong writes
Ever thought that former prez Rawlings and former First Lady Faustina Acheampong would have what appeared to be a sofa-shaped conversation?

A victim’s heart bleeds while his soul mourns says this writer.

Decades have gone by but memories of that event possibly remain an indelible mark. In June 1979 General Acheampong was executed by firing squad together with two other heads of state—generals Afrifa and Frederick Akufo. Five other senior military officers were executed. This followed the June 4 revolution that brought Mr. Rawlings and the AFRC (Armed Forces Revolutionary Council) into power.

Indeed time heals wounds. And history from time to time reminds us of the past. Side by side Mr. Rawlings and Mrs. Acheampong seemed to be engaged in tete- a- tete conversation. Both looked good in their apparel. About what issue nobody knows? It was a private meeting between the two. But the images are talking. They’re telling their own story to the world .And they’ve gotten the ears of the public

The images suggest that the meeting must have taken place not too long ago. Mr. Rawlings’ flowering silver hair confirms that. I can authoritatively say this wasn’t their first. This could be several of such meetings that had taken place a decade or so back between the two. Mrs. Acheampong used to go to the Christianborg Castle – then seat of government way back in 1996/7. This was during the period then NDC government had begun de-confiscating assets of the former heads of state, I found that out when I was on my beat at the Assets and Confiscated Head Office in Accra.

Then Head of Confiscated and Assets Committee Sergeant Dzekitey (may his soul rest in peace) told me, among the probable six wives of the former Head of State the only one that frequented the Castle was Mrs. Faustina Acheampong. Yes Castle recognised her as the legitimate spouse.

Rawlings and Fausties images go viral
I first saw the images of the two personalities on Saturday 7 November, 2017. The caption at the foreground reads: Former President JJ Rawlings having a chat with Mrs. Faustina Acheampong at a funeral...”

The striking images soon attracted comments from the public on various social media platforms. On WhatsApp, a lady wrote: “Time heals wounds. Yes, she can’t hold on for the rest of her life. She has to move on.” Another stated, “When we wait on the Lord he will grant us the patience and time to see face to face with our adversaries. The sign of great personality God bless her gentle heart.”

Many have also commended the former First Lady for finding space in her heart for those who hurt her. ‘Give thanks to Mrs. Acheampong another submitted.

I’m not going to go into words and their meanings. I won’t look into the definition (s) of forgiveness—I’ ain’t ready for that. Yes, I will also leave religion out in this narrative. It isn’t important, after all the Samaritan’s gesture was a million times worth more (Jesus made the allusion) than the Christian or the religious individual that frequented the Church, the Synagogue or the Mosque or the Temple.

Basically, I’ll leave it to the mind, the heart and the soul. They’ll be the best judges. They know best when it comes to forgiveness. The individual’s decision to forgive or not to forgive is a matter between him and his belief and conscience.

Have you ever mused on these questions?
Why should I forgive him or her? Would a pay back or reprisal be enough to assuage or mitigate the pain I was put through? Can I forgive him and forget that something ever did happen?

A story is told of a police officer (white) who planted narcotic in a victim’s car (black). This is a true story it happened here in the states. The young man was found guilty and was imprisoned. A few years later, the police officer got arrested and was also sent to prison. Strangely the two found themselves in the same facility. And they crossed path one day.

It didn’t take long the perpetrator showed contrition or remorse. He looked into his victim’s eyes and said the word: Sorry. The victim said: “That’s all I’ve been anticipating.”

The two embraced and they’ve since become friends --now evangelising together. They make it seem as though there was never a wedge or gulf between them. In fact those who’ve done it ‘successfully’ would tell you it isn’t easy. But they’re perhaps proud to say that it’s in their rear view mirror.

Perhaps the question on the mouths of many is: How did they do it?

Well it takes courage, sober reflection and parts of what I mentioned in the paragraphs above. Their approach might be different but the result has one tag—forgiveness. When we forgive we feel at ease someone remarked. So much as I commend our former First Lady for her gracious act. I think it’s also prudent to applaud Mr. Rawlings for showing an unbending contrition. Bottom line it’s a lesson for us all as a people to understand that the road may not be smooth always. We may hit the bumps sometimes but that shouldn’t stop us in our pursuit of happiness.

Paul had no good intention on his way to Damascus. His mission was to persecute the saints so that the gospel would be truncated. But his mission got truncated instead. His conversion wasn’t received well at first. The disciples were afraid. Is Saul really a changed man? Wouldn’t he turn against us or kill us? It was a happy ending.

Today, Mr. Rawlings is still seen in the political limelight after nearly 20 years of ruling the West African nation. He’s enjoying life with his family in Ghana. Mrs. Faustina Acheampong has most recently been living in the United Kingdom (UK) and has been involved with charitable institutions working in Ghana. Both are proud children of Ghana.