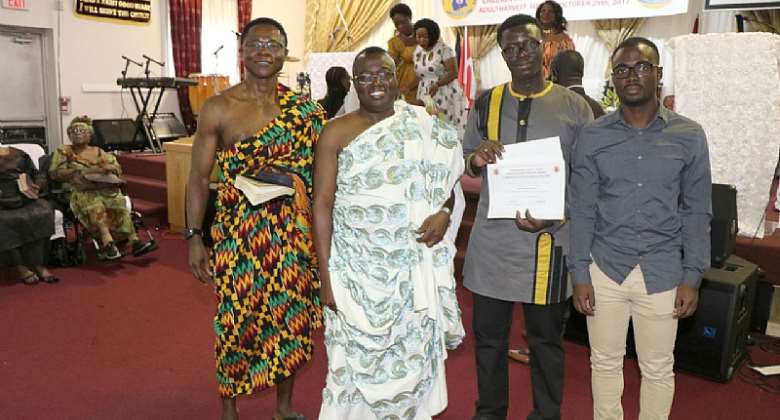 The perception has always been that Ghanaian youth in foreign destinations do not want to go to school but involve themselves in various acts of violence.

Again, those who goes to school to take advantage of educational opportunities their countries of residence offer either face the daunting task of financial difficulties.

But gradually, that perception is being erased as most parents, families as well as church organizations in Canada have realized the need to support the youth financially to successfully pursue their academic excellence.

This was discovered when Dr. David Firang, a Ghanaian professor at Trent University’s department of social work, presented a scholarship to Mr. Fredrick Gyamfi recently in Toronto.

One of those parents or families which have supported several deserving Ghanaian youth financially to acquire requisite skills and knowledge at various institutes of higher learning in Ontario Province in Canada, is Dr. David Firang of the Firang family in Toronto-Canada.

Mercy Firang Memorial Foundation was one of the post-secondary scholarship schemes instituted and administered by Dr. David Firang, in conjunction with the Ghana Methodist Church of Toronto in Canada in honour of late Seth and Mercy Firang, the biological parents of Dr. David Firang.

It is intended to recognize academic excellence to support deserving students who demonstrates an enthusiasm to succeed academically to become a contributing member of the Christian community in Toronto-Canada.

Accordingly, late Seth and Mercy Firang over the course of their lives, devoted significant amount of their efforts in promoting Ghanaian Methodism in the 1960’s and 1970’s in most parts of Eastern Region and Ashanti Region in Ghana.

It was learnt that these great Methodists now in blessed memory, inculcated three key values: education, work and most of all values the fear of God for his wisdom in their children who are honouring them.

Dr. David Firang, adhering to these fundamental Christian values, it was learnt, has secured upward social mobility both in Ghana and Canada.

Since its inception in 2008, Mercy Firang Foundation is awarding annually to qualified applicant who is a staunch member of Ghana Methodist Church of Toronto-Canada and at the same time pursuing a university degree programme in Canada.

The application process is open annually to students who meet the criteria established by the scholarship donors [The Firang Family] in Canada.

The scholarship has its own specific set of eligibility requirements, and is reviewed by a separate selection committee appointed by Ghana Methodist Church of Toronto.

This year’s recipient of Mercy Firang Foundation scholarship is Mr. Fredrick Gyamfi who is currently pursuing a degree programme at Sheridan University College in Brampton, Ontario.

A family friend, Professor Joseph Mensah of York University, a grandchild Mr. Stephen Firang together with Dr. David Firang, urged the recipient to study hard in order to bring honour to the family.

The recipient also expressed his sincere gratitude to the Firang Family and promised to study hard to also follow in the footsteps of the donors by giving back to his community.