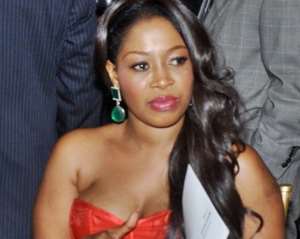 An Accra Financial High Court has dismissed a motion of stay of execution filed by lawyers of Akua Adubofour, mother of convicted cocaine baroness, Ruby Adu-Gyamfi aka Nayele Ametefe, challenging the judgement of the court giving the state the green light to confiscate two storey buildings at East Legon belonging to her (Akua’s) daughter.

According to the court, the motion seeking to stay the execution of the court’s earlier order pending an appeal at the Court of Appeal has no chances of succeeding.

By the ruling, the Economic and Organized Crimes Office (EOCO) and the Narcotic Control Board (NACOB) can legally take steps to take possession of the house currently being occupied by Nayele’s mother.

Akua through her lawyers had filed for a stay of execution pending an appeal at the Court of Appeal against the earlier ruling by the High Court confiscating Nayele’s house at East Legon.

The action follows the ruling of the court, presided over by Justice Georgina Mensah-Datsa, that it was convinced that the properties, which were a subject of litigation, belong to Ruby – who is currently serving an eight-year jail term in the United Kingdom for transporting 12.5kg of cocaine to Britain.

Ruling
The state had filed a motion on notice for the confiscation of the purported illegal properties, estimated at $1.8 million.

Justice Mensah-Datsa had in August this year ruled that proceeds from the sale of the said facilities should be shared as follows: 50 per cent to the Narcotics Control Board, 20 percent to the Economic and Organized Crimes Office, 15 percent into the Consolidated Fund and another 15 percent to the Judicial Service.

Unenthused by the position of the court, Akua dashed back to court seeking to tie the hands of the state over the orders of the court.

Lawyers of EOCO and NACOB led by Abu Issah and Mary Wendy Yeboah respectively filed affidavits in opposition to the motion, compelling the court to rule in their favour.

According to solicitors at the Oak & Wuuds Law Firm, the court erred in granting the request by the applicants –NACOB and EOCO to confiscate the properties.

Appeal
In the motion filed on July 27, 2017, at the Court of Appeal, the claimant stated that “The judgment is against the weight of evidence, considering the facts and the evidence adduced before the court.”

On the second grounds of appeal, lawyers for Madam Akua claim that “The court erred on the means by which ownership or title to landed property may be proved in Ghana.”

Insisting that additional grounds would be filed on receipt of records of proceedings from the court, the lawyers want the court to reverse the seizure of the properties.

Aside cost, Nayele’s mother wants “an order reversing the decision of the High Court to grant the confiscation of House No. 5, 4th Asoyi Link, East Legon, dated 25th July, 2017.”

EOCO and NACOB have so far confiscated all items in the Night Angels Enterprise, located along the Dzorwulu highway and six Fidelity Bank accounts, including one containing GH¢3.22p belonging to Nayele.

EOCO was also demanding that lawyers representing Madam Adubofour serve her daughter in prison with processes she had filed claiming ownership of two houses.

However, Akua’s lawyers insisted that there was no need to serve her daughter with the processes since the houses belong to her (Akua).

Background
In Ghana, Marietta Brew Appiah-Opong, the immediate past Attorney General (AG) and Minister of Justice, through Ms Penelope Ann Mammattha, a chief state attorney, filed Nolle Prosequi to drop the charges against six other suspects who were before an Accra circuit court presided over by Justice Francis Obiri, for their alleged complicity in the Ruby cocaine case.

The application, dated February 20, 2015, signed by the AG, stated in part, “Take notice that the state intends that the proceedings against the accused persons in the above-named case shall not continue.”

Have Confidence In Me, I'm An Honest Leader — Akufo-Addo
5 minutes ago