No Turning Back For NPP Government 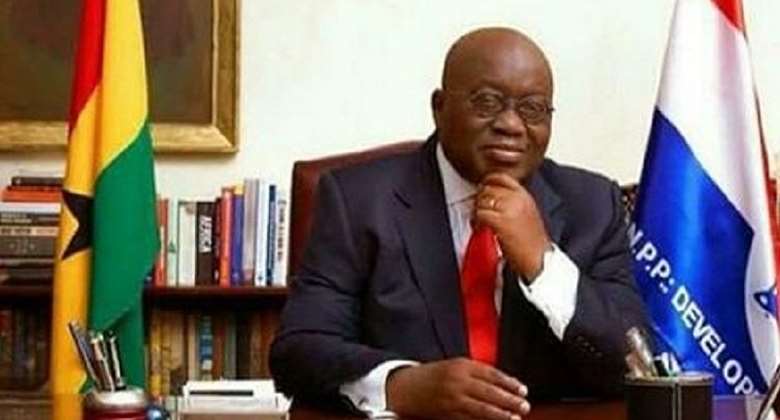 The God who made impossibilities possible for NPP in the 2016 general elections had neither sleep nor slumber and no amount of diabolic hindrances put before their way by their predecessors will stop them from fulfilling their core mandate to diligently serve the needs of all and sundry. I strongly believe the good intentions by the current government to salvage the nation from abyss has started showing glimpses of good things to happen under the return of a responsible and proactive NPP’s government.

Undoubtedly, NPP government in their few months in office had done what Napolean could not do and the destroyers ( NDC) instead of applauding the positive thinkers who are gradually repairing the mess they had caused this nation are rather making unnecessary noise which has no head or tail. NDC’s eight year rule was covered with negativism – agony, suicidal, corruption, underserved judgments debts, unwarranted arrest and unnecessary imprisonment of innocent citizens that led to miscarriage of justice. In a nutshell the NDC government had broad untold hardship to the ordinary Ghanaian. Most especially, the youth was left at the mercy of prostitution, internet scamming, 419, Sakawa or blood money just because they looked indifferent about their welfare.

Mother Ghana was on a sick bed and without hope of surviving under the clueless NDC government and thanks to Dr. Akufo Addo together with his able surgeons in the shortest possible time has healed the nation which has now risen from her sick bed. No wonder the power crisis or “dumsor” which showed its ugly face and haunted us for many years under the uncared-for NDC government has been solved and Ghanaians are getting value for their money paid on their electricity bills.

The current government believes in the fact that governance is for competent and serious minded people and not for empty-headed men who only take delight in impoverishing the nation. The good and flexible measures that the current government has put in place to revive all collapsed companies and also creating the enabling environment for private sector development is a clear indication it believes in the fact that the private sector is the backbone of the country when it comes to job creation.

NDC’s campaign promises presented to Ghanaian electorates in 2008 looked like icing on the cake and that gave them the opportunity to come and showcase their so called “better Ghana” agenda which in the end turned to be “ bitter Ghana pill” too hard for them to chew or swallow. Notable among them was the one time premium which proved fiasco and could not even experience a piloting program. Fuel prices would be reduced drastically but in their eight year reign we experienced erratic increases in fuel prices as at the time fuel prices in the World market had gone down drastically.

The hope and aspiration of the good people of western region was raised high by these same schemers ( NDC) who promised to give them 10% of the oil proceeds to help develop the region and it became a mere rhetoric. They also promised to expand the school feeding program across the length and breadth of the country and the best they could do so far in eight years was cut and paste or elimination by substitution. Looking at their deceptive tactics I think it will be better if they change their party’s name to National Deceptive Committee.

If God had not spoken to Ghanaians to take the right decision to boot out the NDC government that was recklessly mismanaging our economy our dear nation would have been tagged for sale by now. Thank God the change we effected on the 7th December, 2016 general election is gradually yielding good results and very soon Ghanaian electorates will have value for their votes. The NDC have always bragged of being “Social Democrats” who have the interest of the ordinary man at heart and yet have woefully failed to bring at least one social intervention policy to benefit Ghanaians.

Huge sums of money went down the drain under their watch as they are the only Political Party in the World who reared Guinea fowls here in Ghana and not even one was found here. They intentionally planted trees during harmattan season. It was least expected a party whose ideology is based on “ probity and accountability” would rebrand itself as New NDC and will come and swim soundly in the pool of corruption like they had not been in government before. No wonder it was in their time in office we heard the term gargantuan corruption.

NPP who have been tagged by some Politicians as “Capitalist” have shown they had the interest of the ordinary man at heart when it comes to implementation of social interventions or pro-poor policies that will benefit all Ghanaians such as Free Maternal Care, NHIS, Metro Mass Transport, School feeding program, Cocoa Mass Spraying. Introduction of Distance Education for professional and non-professional teachers, Teachers, Doctors and Nurses had the chance to import Cars at a low cost duty at the Tema Port. All social intervention policies that the NPP brought to Ghanaians were policies which can be seen, felt, smelled and touched. This is a hallmark of a caring and responsible government.

NPP government believes the future of this country is inextricably connected with how the younger generation are prepared to meet the challenges ahead of them that is why they have started the Free SHS policy which is the most expensive of all its policies. The Doubting Thomas’ who occupied top positions in the previous NDC government before the 2012 general elections threw dust into the eyes of Ghanaians by coming out strongly to discredit the Free SHS policy which they claimed was brought up by PNDC/NDC government in the 1992 constitution. It may interest Ghanaians to note that they were blind to see it was due for implementation. The way and manner they spoke against this good policy that was meant to make the poor and the rich break even was appalling.

They made it looked as if it was a taboo or Haram to implement such a good policy. They went to the extent of tagging the Free SHS as 419 and surprisingly they made a sharp U- turn to add progressively free to it to make it look acceptable and sweet and it became a mirage which in a typical Akan language would be “Adanko daadaa Adwee” meaning a “Rabit deceiving a Monkey”. “It is known that someone whose house is on fire does not have time to fight” and yet these people (NDC) whose house is on fire according to Pro. Kwasi Botwey’s report is fighting with NPP and before they realize they are making a mistake all their properties will be burnt into ashes. No serious opposition party will do what the NDC is doing at this point in time when NPP government led by President Akufo Addo is gradually delivering its good promises one by one to disprove to the good people of Ghana not all Politicians are propagandist or hypocritical liars.

Free Senior High School has finally come into existence and parents are not paying a pesewa as compared to NDC’s by force progressively free SHS which became a burden on heads of Senior High Schools in the country. This good policy by the current government is a timely intervention by all standards because it has come to reduce the burden of parents. I wonder why we had ten regions in Ghana and for more than five years NDC government deliberately hanged the killer NHIS Capitation on the neck of the good people of Ashanti region for no apparent reason. Allowances of Teacher trainees and Trainee nurses have been restored and the youth of this nation have not regretted voting for NPP who promises and delivers. This NPP government led by President Akufo Addo is a blessing unto Ghanaians and needs our prayers and support to make Mother Ghana flourish. Insha Allah Ghana will take up its good garment.