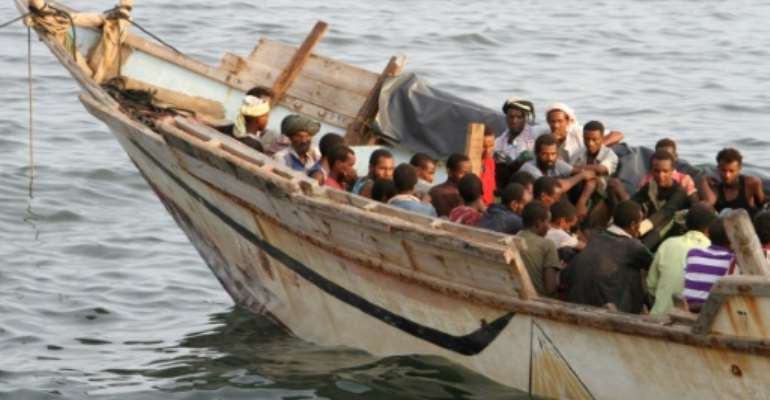 African illegal immigrants in Yemen's southern port city of Aden on September 26, 2016, before being deported to Somalia. By SALEH AL-OBEIDI (AFP)

Dubai (AFP) - Migrants making their way from the Horn of Africa to Yemen are frequently abducted and tortured by "criminal gangs", the UN Migration Agency warned on Monday.

Despite a war that has killed thousands and pushed Yemen to the brink of famine, some 6,000 migrants enter the country every month, according to the UN's International Organization for Migration (IOM).

They often come from Ethiopia and Somalia, hoping to make their way overland to the more prosperous Gulf countries to find work.

Many are abducted by criminal gangs upon arrival in Yemen and tortured for ransom, according to IOM.

"A common technique is to call the migrant's family while allowing burning plastic from an empty water bottle (to) drip on a migrant's skin causing burns and excruciating pain," said IOM director general William Lacy Swing.

"Families usually pay up quickly and the migrants continue their journey often to be extorted repeatedly by different gangs before reaching their destination."

Dozens of migrants have died in the journey to Yemen this year alone.

In August, at least 50 Somali and Ethiopian migrants were deliberately drowned off Yemen by smugglers who appeared to have spotted the coastguard stationed along the coast of Shabwa in the Arabian Sea, according to the United Nations.

In March, a helicopter opened fire on a boat carrying more than 140 passengers off Yemen's Red Sea coast, killing 42 civilians and wounding 34.

Unconfirmed reports say the majority of the passengers were migrants.

The United Nations has said the attack was almost certainly carried out by the Saudi-led coalition, in an operation it said was a violation of international humanitarian law.

The UN Human Rights Council last week agreed to send war crimes investigators to Yemen, where more than 8,500 people have been killed and nearly 49,000 wounded since 2015, when an Arab coalition led by Saudi Arabia joined the government's fight against rebels allied with Iran.

At least 17 million Yemenis now face dire food shortages. Another 2,100 people have died in a cholera epidemic which erupted in April and could infect as many as 900,000 people this year, according to the International Committee of the Red Cross.

You overstepped boundaries in attack on Bagbin – Ayariga tel...
1 minute ago