Would Catalonia Be Able To Woo, Including Nana Addo? 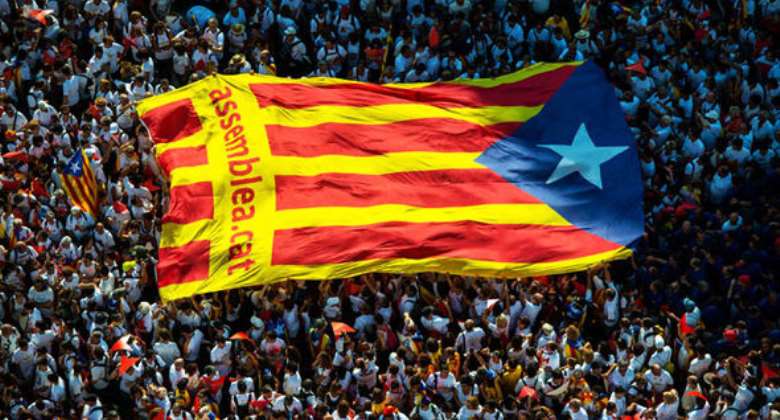 A good Nigerian friend of mine, Mr. Egbenedion, inboxed to gyp, of early morning weekend sleep and sap me. In an apparently cunning message, he asked me to add my age to that of my date of birth then l would have the date it was that day. And that it is the eventual or rather eventful coincidence of periodic characteristic of the centenary. l retorted that even if am not in the league of world intellectuals but to the extent of cheap psychological games to assess my cognitive neurological function of which am not vulnerable

Nevertheless, petty tricks abound many people fall to them easily and historical contradictions are staunchly held and averred as the truth. Not even the elites, the highly educated ones escape these types of hubris. For instance, in Ghanaian political domain, is a fact that Dr. Kwame Nkrumah and his peers fought for the independence of Ghana. As he mounted a podium in Independence Square, Accra, to make a historic announcement of the liberation of the motherland from British colonial rule 6th March 1957. Dr. Nkrumah, nonetheless he made mention of the nation in the West African sub-region

Now, every well-meaning Ghanaian and the world at large will at this stage unreservedly conclude that Ghana existed before independence. And the inconsequential of whatever name it might have previously is fragrantly evident. So l cannot fathom the firestorm of the former premier, the pioneer of the first Republic being touted as the founder of Ghana. And ethos is feverishly unremitting. One thing is admiration for someone's ideas but socialism is the political ideology of ages, not individual traits. Maybe l do not understand the in toto of the word "founder". Any wonder, as some try to beat the rap, couching it in euphemism; "Kwame Nkrumah is the founder of the state of modern Ghana". What does that mean?

As far as Don Lapidario is concerned, geopolitical location of Ghana is insurmountable. So, when the left behind, academically speaking, insinuated that Dr. Nkrumah unilaterally and on his own volition single-handedly added what is now Volta region to Ghana. I was dumbstruck and froze (pardon the pun) in -20 degree Celsius German blunt winter. Even as I sat on public bench reminiscent of the western countries in the middle of snowfall, l couldn't help but noticed that my body temperature slightly rose. The pitter-patter apparently resuscitated me from the gridlock of momentary tribal slur, stereotype, an epithet that l was in. In essence, as German will say: "Ich verstehe nur Bahnhof". Or should we say he was blowing little ducks? Well, a Nigerian counterpart might have gotten away with if he had played a similar ruse on the compatriot. Nevertheless, my Ghanaian diasporan buddy is in the same wagon of delusion as Catalans

Catalonia or Cataluña is located northeastern part of the Iberian peninsula (inland Spain). It shares borders with France and Andorra. Flanked by the ocean. Making it business-prone shoreline with the outer world. A tourist destination. Cataluña has insignificant technology with the majority of citizens being practically farmers. It has four provinces, namely Lleida, Tarragona, Gerona and Barcelona being the second capital, most beautiful city in Spain. Those of you with good memory will recall Barcelona was unanimously selected to host 1992 Olympic Games

Taking advantage of its coastal cities rather provinces as Madrid the Capital has no sea connection. Cataluña is commercial hub of Spain. It has a population of 7 million citizens. It boasts $250 billion in GDP. Making it 20% contributor of the total GDP of Spain out of 17 autonomous regions with the two enclaves on Moroccan territory

The Catalans are extremely very nationalistic people. They speak in Catalan instead of Castellano, the official language. Though they are Spanish officially, they abhor traditions and cultures of the nation of their birth. While clinging onto their customs; one such is the building of human tower. Then Catalan officials banned one of the most cherished Spanish traditions, the bullfighting. But the ban was repealed by the Supreme Court arguing that it was unconstitutional

The people of Cataluña have always had the idea of secession. It has come once again in the limelight. Then-president of Generalitat ( Spain allowing devolved government ) Arthur Mas coerced the federal government led by prime minister Mariano Rajoy with two options: Either Mr. Rajoy would succumb to spend more money, in terms of redistribution to develop their 'nation' or independence

When the PM refused, Mr. Mas quickly conducted an early election, which he lost terribly. Mr. Mas together with radical political party CUP in government, conducted citizen-consultation some time back. Though the consultation was successful it was the flagrant violation of the federal constitution. The official plebiscite to secede from Spain is slated for Sunday 1st of October 2017

Needless to say, Spanish officials are outlaws/scofflaws, very corrupt, heartless crooks and baloney pricks. PM Rajoy and the King's daughter aren't exceptions. The duo is embroiled deadly corruption scheme code-named Gurtel by police operation. The impunity might have emboldened the Catalan politicos to embark on these treasonable quests. In the end, Mr. Mas was recused and a new leader in the name of Carles Puigdemont has emerged. But the idea of separatism has not changed. And the enthusiasm with the 'Clasico', FC Barcelona and FC R. Madrid football clash, explains it all. Even sports have been politicized

Meanwhile, los Mossos D'Escuadra, the Catalan autonomous police force have issued directives to Guardia Urbana, the local police to search and confiscate election logistics. That is very refreshing. And Mr. Felipe Puig, then police director would have known that a los mossos though formed in Cataluña hold allegiance to the federal constitution. Hence Mr. Puig's dream of using the Catalan police to fight the army in secession move bid is quashed. In any case, PM Rajoy has assured the nation that plebiscite wouldn't take place. He also dispatched a bevy of Guardia Civils (call them striking force/panthers if you want) to Cataluña

In the contrary, as is always the case the irony is exquisite. In that, those calling for equity have never come with clean hands. Needless to say that myself and Nigerian amigo never had to slide on a shrimp sandwich in Cataluña. And the video of homeless Ghanaians that went viral on Facebook was also recorded in Cataluña. Also, Catalan authorities have not played nice with migrants. Many countrymen have been arbitrarily jailed without fair trials. Then, the authorities went all length to prevent its "properties" (legal migrants) from living the country without any meaningful social policies to cushion the people

I empathize with IPOB and one thing is agitation for better living conditions but the secessionist movement is elusive. The truth of the matter is every country geo-political boundaries, demarcation are sui generis that they are smack dab enshrined in the sanctity and sanctuary of international laws. Precisely why Ivory Coast lost the maritime dispute with Ghana. And for the information of Mr. Nyamekye, the Deutschland burger, Voltarians have always been "here". It was Europeans who divided us

I have a lot of confidence in Nana Addo, who fervently and vehemently advocated for fair treatment of Ghanaians abroad. He went on to threaten diplomatic row with Gulf nations whose inhuman treatment of our country folks actually turned his crank. This time around, l believe, he would convince African leaders to vote against Catalan fascist/Nazist scions and xenophobes masquerading under the frock of secessionist drive in UN summit. Needless to say that Spain reeling in over 20% unemployment ratio for ten years now, the least we expect is wanton division

Disclaimer: The author is solely responsible for this article