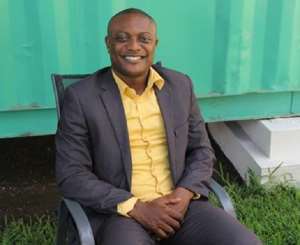 I watched with keen interest a video of an individual referred to as Lawyer Maurice Ampaw and his client Lawrence Abrokwah, posted on Ghanaweb. The video was titled "Court has to prove Abrokwah leaked Afia Schwarzenegger's video", dated Saturday 9th September 2017.

As I watch the video with my prior knowldhe on most of the build ups, I could not imagine how hopeless a lawyer of the potentially accuse person and his client can be. I could not stop wondering whether the two individuals granting interview in the video, are mindful of what they are saying in the to the public. I was convinced the two individuals were under the influence of substances enough to make thme incapable of being in charge of their physical and psychological composition. Both gave so much away, by their body languages.

Dear reader, without wasting your time with all the details of how it all got to this as I know there are enough information out their to inform you, I want to make it very clear to Mr. Ampaw that the court of law or the Ghana police, do not have any obligation to prove the leakage of the said video, was not by ypur client Mr. Abrokwah. The one who recorded the video of another person's nudity is the person responsible for ensuring that the material does not fall into wrong hands. So it is the duty of Mr. Abrowah to safe guard the content of the video of another person he recorded without the consent of the offended. If out of stupidity, Mr. Abrokwah gave copies to others and the video got leaked that is his negligence. It is without doubt that Mr. ABrokaw entrapped Afia with a motive which in this case, turn out to be humiliating her in public and creating fear in her. Are these not exactly the issues under contention?

Since there is a position that Mr. Abrokwah made a copy available to the police, what a good lawyer is suppose to be doing in favour of his client, is to explore favourable possibilities for his client along this line. He is suppose to be exploring the basis on which the copy was made available to the police to lay the betrayal of trust on the police. He should be asking whether police request to client in hamding over the video was carry put formally or the accuse embarked on the act of giving the material to the police voluntarily? If Mr. Ampaw is to go on this targent, he shall be finding out if his client had evidence of a written request given to him by the police on the subject?

Even in going along this line, it is important for Afia to be notify of the police requesting for her nude video and she must consent to that? I am very sure all the answers to all the above are, negative.

The next issue is, how lawful is it to threaten another enough to the extent of making the person convince they are going to losing their life? Is it lawful for anyone to point a gun or a knife at another, with a backed up verbal threat of terminating their life? If a person threaten anyone with a gun, even if it turn out that it is a toy (replica) gun, is the person not liable to a criminal act under "unlawful intent"?

The fact is, Afia believed at the time of the incidence that Mr. Abrokwah genuinely had acid with him to carry out his threat of terminating her life. She knelt on her knee to be for mercy. She asked Abrokwah to spare her life. So Afia believe the content of the bottle in the hand of Abrokwah was acid. Mr. Abrokwah wad also heard backing up his threat with words to reinforce his intent to highten Afia's fear.

If Mr. Abrokwah had said to Afia that the content of the bottle in his hand is water, she would have believed him and her fear would have been lesser, even if it was actually acide. After all he did not use it and so, it could have been his medical syrup.

This is a serious case and the so called Lawyer Ampaw must stop behaving like a clawn, to let his client understand the gravity of the charges. Afia is absolutely on the right course in this case and strangely, the report had it thst she was relax and singing in her case, as the police were dealing with the issue. This only confirms she good lawyers in the shadows guiding her. There is no law in the constitution of Ghana or act of parliament, criminalizing a man or a woman in marriage, for having extra marital affair, as Mr. Ampaw is making it seem. Such acts, if uncovered, are only helpful for the agrived party to use as the basis for desolving the marriage. Any form of physical attack on any person within marriage, for engaging in extra marital affair, is criminal. Physically attacking a person enough to make the individual believe his or her life is going to be terminated, is a voilation of the person's right to life. Since the state ia the guarantor of the life of the citizen, by which the state act when life is terminated under the criminal act, an intent to terminate the life is as good as the act itself.

Afia has every right to go to bed with who ever she want. It is totally within her personal right, married or not. Marrying a man or a woman, is not a right for anyone to own any part of another person's body. We are not living under any mosaic religious law where such acts are coded and foebidden. The fact that one's moral make these action wrong, does not make it so under the laws of the state of Ghana and it is very clear.

Our criminal laws are fashioned in line with the British law, and Brirish law criminalizes the act of invading on another personal privacy.

We may all dislike Afia's ways of life and will wish she meet her waterloo soon, this is not the case in this instance.Afia's understanding of moral rightiousness might be totally different from ours but she has not broken any law of the state of Ghana. And if Afia has violated any law of the state of Ghana, it is the responsibility of the enforcers of such law to punish her and not you, or I.

Afia and the state of Ghana can put Mr. Abrokwah behind the bar for at least seven (6) years. MauriceAmpaw must back off if he is incapable of helping Mr. Abrokwah, than encouraging his client to make further mess of what is already a bad case. This is a criminal case and the Ghana police must be seen to live up to the public expectation, in their duty to uphold the law.

What kind of a lawyer publicly threaten the court, the police and the poor defendant? What kind of a layer goes to police station to represent his client, and end up engaging in fighting the police instead? What kind of a lawyer as the police to arrest every who has committed the crime his client is charge of? Maurice Ampaw is a disgrace to the legal profession. I look forward to the GBA (Ghana Bar Association) to take an action against Mr. Ampaw for dragging the sactinonious profession of law in Ghana into the mud. The GBA has done this before and hope to see it cracking the whip again.