Ghana Public Libraries:  Are They Dead Or Alive? 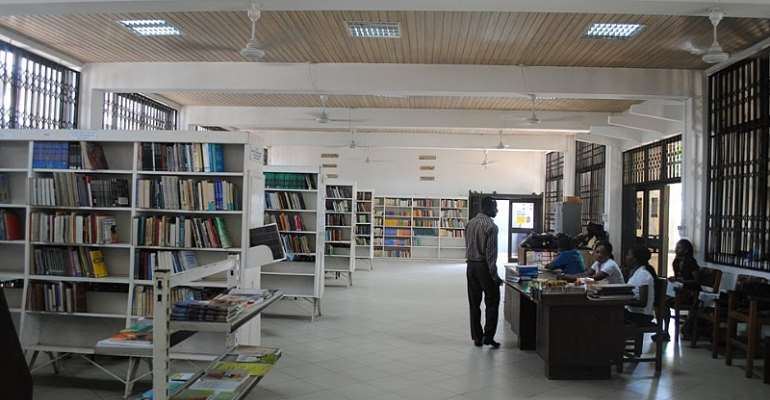 Does Ghana Have a National Library?
It’s a travesty to deny any generation the right to quality education, information etcetera, says author Gordon Offin-Amaniampong

xxxxxxxxxx
Ghana hasn’t done badly when it comes to her vision and goal to: 'establish, equip, manage and maintain public libraries in the country. At least she’s the University of Ghana’s Balme Library (established in 1959) to brag about, which is regarded as the best library in West Africa. More so, between 1909 up to date she’s been able to establish public libraries in all of the nation’s regional capitals.

There are more than 62 public libraries currently doted around the West-African nation, the size of Oregon State in the US. The Supreme Court Library is deemed to be the oldest, opened in 1909 and Achimota School Library, Accra comes second established in 1927.

But is that enough?
No, I don’t think so. It isn’t worth bragging about one asset, when you’ve nearly 100 of your assets neglected and left to rot. How about this: What shall it profit a Man to have 10 children and leave them all to go wayward? Would that make him/her a good or great parent?

Truth be told the structures on the ground belie the beautiful ideas and objectives set out in her books. In fact, Ghana’s plan to make the country a literary and enlightened one, provide materials and other educational aids to support formal and informal education as well as develop the manpower needs of the nation would come to naught if pragmatic and robust measures aren’t put in place to revitalise these libraries that are fast deteriorating.

It must be emphasised that Ghana could have done better (if not even establish more public libraries, at least maintain the few) over the years given her status as low middle income nation in the sub region. In my view, the pure neglect of these public libraries is an indictment on the nation. It reminds me of this popular saying about our forests: When the last tree dies, the last man dies. Well, guess what would happen to our generation and the ones that will follow us…they’d be bereft with knowledge because there would be no public libraries.

A former Education Minister under Kufour administration Ameyaw-Akumf made the following remark: “Libraries in the country had completely been run down through years of neglect.

A society without a library where tourists can easily have access to information on its history and culture is a society which is not ready to inform others of its heritage.”

History of Ghana public libraries
By 1928 there had begun what came to be known at the time as the public library movement in Ghana. And it was championed by then Anglican Lord Bishop of Accra Right Reverend John Aglionby. He opened his own library of some 6,000 volumes at the Bishop's House in Accra for members of the Parish.

Almost two decades later precisely 1946, the public library service began in Accra under the name of Aglionby Library in honour of the Bishop for his revolutionary efforts. Subsequent upon that ground-breaking effort the Gold Coast Library Ordinance 1949 was re-enacted in 1970 under the title Ghana Library Board Act (No. 327, 1970).

Following a series of bills initiated by GLA an Act was passed in 2008 by the Parliament of Ghana to establish the Ghana National Library Service. It superseded the Ghana Library Board Act of 1970. And based on the new local government system which placed much more emphasis on decentralization, the said Act empowered metropolitan, municipal and district assemblies to establish their own libraries. It was expected that the Act would create an environment for the improved operation of then Board, and accelerate the development of libraries in Ghana.

But as earlier noted the ground still doesn’t look good. It betrays Ghana’s quest to reposition herself as tourists’ destination in the sub region. From time immemorial the problems had been inadequate provision of resources such as finance, manpower and library materials. In view of the poor funding, very little has been coming in the form of new books. Aside that low salaries have also affected the recruitment of new staff and the retention of older ones.

In 1986 the PNDC government initiated a plan to turn things around. The Ministry of Education which spearheaded the initiative set up a Community Libraries Project with the aim of improving the standard of education of pupils in the country.

For example, Accra with a population of nearly 3 million has only six community libraries. These libraries are expected to serve the various communities, not only the school children. Sad to say that very little has been done to maintain them over the decades. This is partly due to our lack of maintenance culture, rendering facilities and services in these libraries in a deplorable state.

Does Ghana have a national library?
Mrs. Gladys Prempeh a Ghanaian now resident in the United Kingdom asked a Librarian the above question when she visited home this summer with her two sons. And the response was/is: No Ghana doesn’t have a National Library. However, many Ghanaians think the Ghana Library Board (GLB) building sited near Bank of Ghana or the Supreme Court is a National Library. No it isn’t and it doesn’t meet or qualify such status. That library is called the Accra Central Library. It was established in 1956.

The GLB which was founded in 1950 is believed to be the first Ghana library service in sub-Sharan Africa. The Board was established by the 1949 Gold Coast Ordinance and it assumed responsibility for the Aglionby Library which had been stated John Aglionby—the Anglican bishop of Accra and the British Council’s mobile library for other public library services in Africa.

In 2003 then NPP government planned to build a national library in Accra to accommodate what it called ‘rare literary and cultural materials’. The said library was supposed to be directly under the Presidency. Then Education Minister Prof Ameyaw Akumfi tasked GLB to work out the modalities for the implementation of the project. And in collaboration with the Carnegie Institute of the United States of America the two carried out the project and gave Padmore Library a face-lift. So in many respects the George Padmore Library which is under the GLA performs some of the functions of a National library.

There’d since been attempts to get that plan actualised but to no avail. The Ghana Library Association (GLA) at its 50th anniversary celebrations in 2012 highlighted some key topics such as: Libraries key to national development, libraries access to knowledge and of course the illusive national library the case of Ghana building a strong library association.

How Are Libraries Doing Around the World?
Across the world activities by public libraries haven’t been remarkable. This is evident by the survey below.

‘North American library growth is unimpressive’, wrote Jonathon Sturgeon senior of The Baffler. His article was about the Annual Library Budget Survey, a global study that queries 686 senior librarians about their budget spending predictions for the year. It was published in 2016 by the Publishers Communication Group (PCG), a consultancy wing of Ingenta, the self-described “largest supplier of technology and related services for the publishing industry.”

For North American libraries, the survey was more cautious than optimistic, with librarians in the U.S., Canada, and Mexico expecting only a 1% increase in budget spending. In other developed or “mature markets,” the report says, growth expectations were negative. In Europe, for example, budgets are expected to fall by 0.1%.

According to the repot in less developed markets, signs pointed to higher expectations for library growth. In the Middle East and Africa, senior librarians were anticipating growth of up to 4.2%. And in Asia experts predicted 2.8% increase in budgets.

A/R: Police on alert for eminent clashes between Adwumakase-...
12 minutes ago