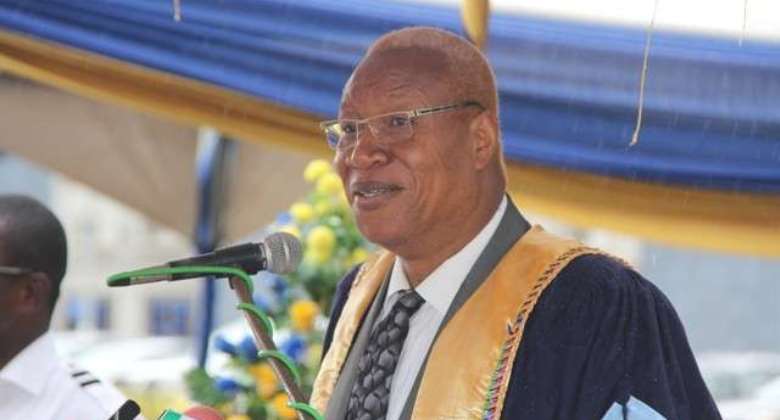 Like many great men, Prof Joshua Alabi had a humble beginning. Just like the Nkrumahs, the Rawlingses, Keitas and several great men who rose from the bottom to the top, Alabi had a rough beginning. His mother Anti Naomi was a trader and his father Atta Emmanuel Tamale as he was affectionately called was a mechanic (fitter as they are popularly called) and a farmer.

To make things complicated, he was born in Nungua, a fishing community right at the centre of Accra. Alabi's grandfather Nii Obishie, the then Chief Linguist of Oyibi, a village on the Dodowa road was a farmer. His maternal grandfather Cee Kwabena doubled as a cocoa farmer and fisherman. It was from Cee Kwabena little Alabi learned his first trade, fishing. But for the seriousness his family attached to education, Alabi would have been a very good and proud fisherman. Many of his childhood friends are still fishermen to this day.

Fishing with his grandfather was not only fun but it also brought him few coins as a little boy. Little Alabi's parents and grandfather realized so early that the little boy was intelligent, unique in his own ways and stood out as a very focused person.

Nature had given him peculiar human qualities. His God-given complexion made him a most talk- about person from childhood even to this day. He has almost always been fairer in complexion than everyone else. These outstanding traits gifted by God Almighty and recognized so early in his life by his parents were to propel Alabi to even greater heights in the near future. God, they say, has a purpose for every creation.

Despite the obvious economic challenges, little Alabi's humble family sent him to a boarding school, St. John's Preparatory Primary School situated at the current St. John's Grammar School in Achimota, a suburb of Accra. It was here little Alabi had his primary education. St John's was a typical DADA BEES school (a school attended by children of upper class and wealthy people) in those days. Clearly little Alabi's family meant business. They wanted the best for their son.

As he suddenly found himself among children of members of Parliament, business tycoons and rich men, little Alabi felt unease. His fisher-friends were no where to be found. He often missed the adventures at sea, his fisher friends and his grandfather. After all, a boarding school is not a prison. During vacation, little Alabi would go back to his fishing job where he would meet his friends one more time and they would venture into countless adventures. Yes, this was where boys were forged into real men.

Back to school, while the BIG BOYS would be discussing their holidays in London and New York, little Alabi would be as quiet as a deaf and dumb person. How could he tell these BIG FRIENDS with their BIG STORIES that during vacations he only went fishing at Nungua Beach?

In his final year at St John's Preparatory school at the age 12, Alabi was made the CHOIR LEADER during his school's Speech and Prize Giving Day. He was a good singer. Singing remains his hobby to this day. It was however basketball which fascinated him and he wanted to play as a professional (refer to Alabi's life in Sports, part 1).

When he arrived in Tamale Secondary School at the age of 13, he was so small that some of his class mates he thought were his seniors bullied him initially only to find out later that he was in the same class or level with them. To comfort himself and get some little protection, young Alabi joined the SCRIPTURE UNION. Here he could freely practice his singing skills which was his hobby. Alabi also played basketball for Tamale Secondary School. He said his final goodbye to TAMASCO after landing his ORDINARY LEVEL CERTIFICATE from 1971 to 1976.

Back to Accra, Alabi had an admission to the Institute of Professional Studies (IPS) where he completed his professional training in ACCOUNTANCY AND MARKETING from 1976 to 1980. Here in IPS, Alabi was chosen by his course mates as their COURSE LEADER. He was also a member of the SRC Advisory Council. Alabi recalls his student days in IPS with nostalgia. It was in IPS that his leadership qualities began revealing themselves. After studies at IPS, he undertook a teaching career for a year at Northern School of Business, Tamale, before he proceeded to Moscow (Russia) to do his Masters in Industrial Economics.

In Europe he obtained two Master Degrees; Masters in Industrial Economics at the Russian Economics University , Plekhanov in Moscow, Russia and Masters in International Marketing at Strachylide University in Glasgow, Scotland both on scholarship. Of course, scholarships are given to brilliant and qualified students. Alabi always exhibited the Ghanaian in him wherever he found himself.

While a student in Europe, Alabi was overwhelmingly endorsed by Ghanaian students as NUGS President Europe from 1985 to 1986 and NUGS President USSR for two terms, from 1983 to 1985. Prior to being a President of NUGS, he was Vice President for NUGS Moscow from 1982 to 1983.

During his NUGS days in Russia, Alabi led THE MEDICINES FOR HEALTH PROJECT and he succeeded in mobilizing and delivered huge volumes of medicines to FLT Lt JJ Rawlings who was the leader of the PNDC and President of Ghana in the heightened period of the recession in the early 1980s. This was how Alabi first came face to face with the famous Flt Lt. J.J Rawlings who would later appoint him as a Regional Minister to his home Region, Greater Accra and a Regional Minister to his second home, Northern Region.

After completing his Masters in Industrial Economics in Moscow in 1986 Alabi had an opportunity to do his PHD but he decided to fly to Ghana to do his National Service. He taught for four years at IPS, before he left for Glasgow Scotland to do his second Masters in 1991, under the British Council Scholarship. Upon completion, he got admission to proceed with the PHD but he decided to honour their term of the scholarship by coming home immediately upon completion to serve his nation.

Alabi's life as a poor boy from Nungua did not prevent him from becoming a great person. His complexion came constantly under public ridicule. His challenges started with how can this OFRI BOY BE OUR FRIEND, to how can we allow this OFRI MAN BE OUR LEADER? Yet, he continued to defy the odds. As time would show, he excelled as a sports administrator, politician and academician.

Prof Joshua Alabi was employed as a lecturer at university of professional studies , the then IPS in 1987.

Alabi is reported to be eyeing the greatest prize of his life and perhaps the highest hurdle any hurdler could jump, the Presidency of the Republic of Ghana.

For a man who almost always succeed in whatever he attempts, he may well defy the odds once again.

Watch out for my next article.