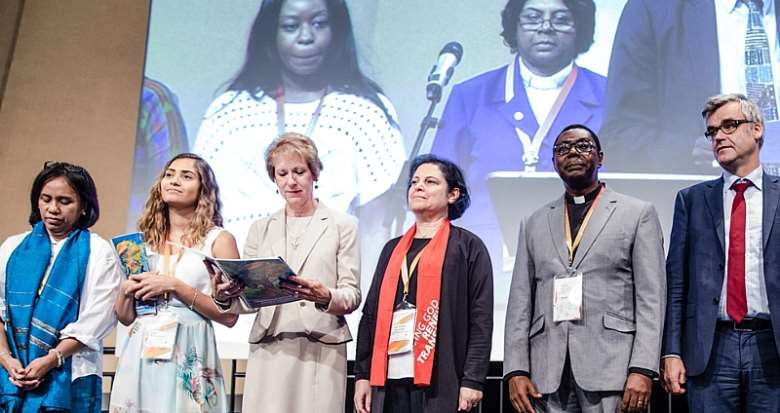 The Rev. Najla Kassab, a minister in the National Evangelical Synod of Syria and Lebanon (NESSL), has been elected president of the World Communion of Reformed Churches (WCRC), which groups more than 225 churches in over 110 countries.

“With her experience and many gifts, Najla’s vision, insight, spiritual strength and grace make her the right person to lead us forward as president,” said Alison McDonald, the moderator of a Nominating Committee that brought a slate of nominees for the WCRC Executive Committee to its General Council.

The elections took place on 7 July, the final day of the Council, which has been meeting in the eastern German city of Leipzig since 29 June. Of the 22 members of the new Executive Committee, 10 are men and 12 women; 15 are ordained and 7 are lay people. Five of the members of the Executive Committee are young adults under 30 years of age, including one of the vice-presidents.

Kassab, 52, has been a member of the WCRC executive committee since 2010. The director of the Christian Education Department of NESSL, she was the first woman to receive a preaching licence in her church and, in March 2017, the second woman to be ordained. Kassab has a BA in Christian Education from the Near East School of Theology, and graduated with a Masters of Divinity from Princeton Theological Seminary (USA) in 1990.

Ayete-Nyampong has been clerk of the General Assembly of the Presbyterian Church of Ghana since 2012. He was previously responsible for the church’s international and ecumenical relations and partnerships, as director of Ecumenical and Social Relations.

Vander Wal currently serves in Lisha’s Hill Reformed Church in Colonie, New York. She is a past president of the General Synod of the Reformed Church of America, and moderator of the RCA’s Commission on Christian Unity. She is convener of the Steering Committee of the Caribbean and North America Area Council (CANAAC) and has been a member of the WCRC Executive Committee since 2014.

Apituley, of the Gereja Protestan Indonesia Bagian Barat, is currently senior advisor to the Executive Office of the President of the Republic of Indonesia, having also worked as a special advisor to the Minister of Women Empowerment and Child Protection, and as executive director of the Indonesian Conference on Religion for Peace. She has been a faculty member and lecturer at the Jakarta Theological Seminary since 1997.

Brasil, of the United Presbyterian Church of Brazil, is a lawyer and graduate of the Federal University of Minas Gerais. She is actively involved with the teenagers and young adults of her church at a local and national level. She is currently vice moderator for the youth of her church and was a delegate in 2016 to the General Assembly of the Alliance of Presbyterian and Reformed Churches of Latin America (AIPRAL).

Also elected as members of the Executive Committee are: