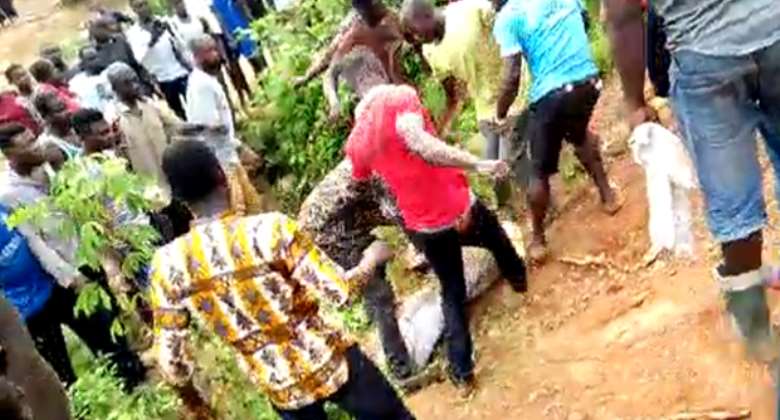 Scene from the lynching incident

“Man is the most insane of the species. He worships an invisible God and destroys a visible Nature. Unaware that this Nature he is destroying is this same God he is worshiping” – Herbert Reeves (Astrophysicist)

I knew it will come to this one day but I did not know it will reach this level where a whole young military officer who was out there to protect our environment will be lynched by galamseyers. The President, Nana Akufo Addo has already declared war on galamsey but I, your irrepressible Earth Angel Gabriel hereby declare total war on galamsey. There will be no retreat and surely there will be no surrender.

If a great river like Pra which flows into the sea at Winneba could pollute the sea because of galamsey operations up stream, then there is no option but to go to war. And if fisher folks along the coast are complaining of lean harvest due to a polluted sea, then all necessary tools of war should be applied to execute this war against galamsey. Such necessary tools of war include the media. That is why I have gone to buy a new fountain pen and a bottle of ink to go to war. I am aware there will be fallen heroes along the way like what happened to Captain Mahama, a martyr who was out there protecting the environment and river bodies.

Today, the battle cry that Ghanaians have been waiting for before going to war has already been delivered by the people of Denkyira Obuasi. When I heard of the unfortunate lynching of the young, handsome and promising military officer, my initial grief turned to anger and anger to resolution. My resolution was that, come what may those who murdered this young man must be brought to justice or justice must be brought to them, wherever they are hiding.

What happened at Denkyira Obuasi was an act of war declared by these galamseyers. Our war against galamsayers begins with the people of Denkyira Obuasi, but it does not end there. It will not end until every galamsey site is attacked, destroyed, stopped and defeated. It will not stop until some recast rant galamseyers pay the supreme price for daring us. This war is not going to be like the war against corruption where lives will not be lost. Our response should involve far more than the military drilling which took place at Denkyira Obuasi following the murder of the military officer. I learnt one of the attackers of Captain Mahama was killed and that is good. It is the beginning of greater things to come.

This is not going to be just one battle. This is going to be a lengthy campaign. The military should strike and make their strike both visible on TV for people to see and conduct covert operations, secret even in success. Every Ghanaian, irrespective of one's political leaning now has a choice to make. Either you are with us or with the galamseyers. From this day onwards chiefs who will allow galamseyers to operate on their land will be regarded as a criminals and enemies of the state. The security agencies, led by the Military should arrest such chiefs, drill them in public and drive them from town.

Our nation has been put on notice. We are not immune from attack by galamseyers. In fact, we are not safe. And if you are not safe what do you do? You arm and defend yourself. This is not the government's fight, this is people's fight. This is a fight for all those who want to see a clean environment and drink unpolluted water. And remember water is life. This is a new national challenge we are facing. We must come together to surmount the challenge. We must not rest nor should we tire. Great harm has been done to our environment and we have already suffered a great loss. Now that we have found our mission and our moment, the time has come for us to rise up together and take the bull by the horns. It is we who should take the fight to the galamseyers. We will drive them from place to place until there is nowhere to hide.

Let me seize this opportunity to console the wife and children of this fine officer. Justice and cruelty have always been at war and we know that God is not neutral between them. Those who took part in the lynching of the officer can hide for now but nemesis will catch up with them sooner than later. When I watched the video recordings of the unfortunate incidence, I came to the conclusion that if our security agencies, particularly the Police CID and BNI fail to apprehend the culprits then we should think of re-making these two outfits. Faces were seen in the video recordings and as such, inhabitants of Denkyira Obuasi know all of them. If even it should take coercion, undue influence and the use of brute force to extract information from the people of Denkyira Obuasi , it should be done. After all, in time of war, everything is fair.

Did I hear Johnson Asiedu Nketia, the NDC General Secretary well? That the President, Nana Akufo Addo should be blamed for the lynching of Captain Mahama? Hear the empty headed General Secretary of the defeated NDC: “The death of Captain Mahama was under the direct supervision of President Akufo Addo”. If we are to go by what the skinny General Secretary said, then the murder of the Seikwa Omanhene, was under the direct supervision of ex-president Mahama. There is madness in the stomach of this village politician! The culture of instant justice started when the founder of the NDC held the country to ransom. In fact, the late Professor PAV Ansah had cause to write series of articles on the issue. I remember one of his articles titled: 'Instant Justice, Rough And Ready' which was published by the Chronicle newspaper some thirty years ago. In that article the late Professor admonished Ghanaians to come together to speak against the menace since society will live to regret one day if the menace was not nipped in the bud. Ghanaians did not pay heed to the admonishment of Professor Ansah and today, here we are.

In those days, Professor Ansah also wrote extensively against the bizarre exhibition of what he called “soldier power,” the drilling and shaving of suspects with broken bottles and act of terrorism often explained in those days as revolutionary justice. Ghanaians did not heed the clarion call and lynching of suspects and instant justice lived with us till today. As for people like Asiedu Nketia who were living in their villages, they did not experience what happened during the revolutionary era in the big towns and so they cannot be blamed. When you lived in your village then and all what you did was to pick up your cutlass and hoe and go out there into the bush to till the land and cut the bush, you will talk like Asiedu Nketia. When family members of Captain Mahama are in a mourning mood and in fact, the whole nation is weeping for the poor guy, this opportunist, has the guts to rake our hearts with such absurd and heartless statement. Asiedu Nketia has no shame. There he is, ashamed and standing alone.

Captain Mahama's untimely and unfortunate death has nothing to do with politics. It is a wake-up call for Ghanaians to stand up to be counted when the issue of lynching comes up for discussion but not the way and angle Asiedu Nketia wants us to go. Since the NDC lost the last election, their communicators have gone haywire and acting like a snake whose head has been hit with a stick. They are desperate as if desperation will bring them back to power in 2020. Ghanaians can read between the lines and they can differentiate between a buffoonery and a statesman. Asiedu Nketia falls in the bracket of the former. But you know what? Asiedu Nketia will not be allowed to fool around like he used to do when the NDC was in power. Wealth, yes he has acquired enough to make him comfortable but wisdom, no, he is yet to acquire one.

THE DCE WHO SUFFERED FROM VERBAL DIARRHEA
The 23 Assembly members of the Upper Denkyira West District Assembly who confirmed Mr. Daniel Appianin as the president's nominee for the DCE position may be cursing the day they were born. This overzealous scatterbrain decided to let his voice be heard in the fight against galamsey by using the sad lynching of Captain Mahama but sadly he did not know that he stepped on the raw nerves of the good people of this country of thirty million souls. How can a man be so callous to such an extent?

The truth is that the guy is not on top of the job and must be removed as soon as possible. Mr. Appianin cannot tell Ghanaians that for the three weeks that the officer was the commander of the detachment posted to protect the environment against the activities of galamseyers, he never encountered him in anyway. And he cannot also tell us that he is not aware that the soldiers are stationed in his district. Thankfully, the President Nana Akufo Addo has shoved him aside for investigation into his infantile utterances to begin. If he is found culpable, he should be dismissed to serve as a deterrent to the rest. If even indeed, the military officer was protecting galamseyers, I don't think the same galamseyers will be so ungrateful to lynch their protector. You see the absurdity in the DCE's pronouncement? A fool will always be a fool if even you train him on the moon.