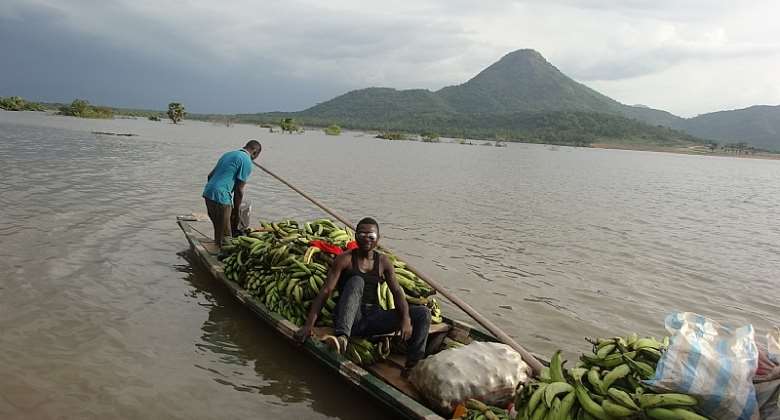 Kashimbila, Taraba State, Nigeria 13 May 2017: Water retained by the Kashimbila Multipurpose Dam built by the Federal government in Takum Local Government Area in Taraba State has been rising and flooding parts of Nigeria and has also submerged villages in three subdivisions in the Cameroons.

Work on the dam in Kashimbila located at Latitude 6.87324 N, and Longitude 9.75942 E started in 2009. The project commenced overlooking basic requirements for mega projects like informing the populations of the areas to be affected in advance and obtaining their free consent (FPIC). No environmental and social impact assessment (ESIA) was carried out to determine the suitability of the project in an ecological hotspot like the Katsina Ala Basin. Furthermore, project management has refused to sign any memoranda of understanding (MOU) with the affected communities.

Polluted and contaminated water from the decaying biota (animals and plants) under the dam waters has reached Kpep located on Latitude 6.79813 N, and Longitude 10.06849 E into Furu Awa Subdivision in the Cameroons. Nobody here was informed of the project and both the project management and the affected persons did not anticipate the arrival of this water.

The Federal Government of Nigeria had bullied all opponents of the project into accepting it claiming that the dam was a buffer against the cataclysmic waters rushing down from the collapsing walls of Lake Nyos located on the Cameroonian territory. According to Nigerian authorities, the gases from Lake Nyos which killed 3000 people in 1986 were still accumulating and a similar explosion today will cause the narrow walls of the lake to break flooding many states in South Eastern Nigeria.

Nigeria failed to inform her people that the lake is being degassed on a regular basis and that the gases would never accumulate to a dangerous amount that would explode again. Conferences were organized throughout Nigeria and beyond to cement this fear factor in the minds of people and curry favour for the dam.

Today, the world is waking up to an environmental and human disaster, far worse than the doomsday tags put on Lake Nyos by fear mongers. This lone argument is stomached with complicit silence by the Cameroons, itself not sure how to explain the Lake Nyos phenomenon which many believe was a conspiracy.

On the fast moving beaches of Alang, in Nigeria where travelers are now forced to board rickety boats to Akum Upkack in the Cameroons, a tired Ramatu Garba said, “This water pursue everything. It pursues animals. It pursues people, pursue trees, pursue houses, pursue Cameroon people, pursue Nigeria people. This water too much.”

Ramatu aged 65 says she has been trading along the Katsina Ala River basin for more than 40 years, and never in her life has she seen the river rise above its banks to devour things more than a kilometer from its river bed.

Millions of traditional West African oil palm trees have disappeared under water and it is a free for all those who can afford a boat ride to penetrate the devouring waters to harvest palm nuts. Not being aquatic plants, all these palm trees will decay and collapse. Cocoa trees, in their millions, African bush mango, banana plantains, hectares of corn, cassava, groundnuts have all disappeared under the water.

Survival instincts have pushed some daring farmers on the Cameroonian side to move to higher ground to plant new food crops. The earth around these steep rocks sometimes rising to 30 storey building is fast moving and loose being of volcanic ash. Farming here would only lead to erosion that would take away the last shallow earth and the ever permanent giant rocks in the Cameroon trough would reign supreme.

Three months into the flooding, authorities from the Furu Awa and Fungom Subdivisions in the Cameroons rode against the shifting tides into Akum Upkack on 12 May 2017. An elite observed that they were at the mercy of God alone. They could be wiped out by the forces of man and water at a time without anyone coming to their rescue.

Michael Robbin, who makes occasional incursions into the Cameroonian territory on a flying boat, is said to tell curious Cameroonians who emerge from their collapsing buildings to stop him on his ride like a Hollywood star that he is waiting for the Cameroonian authorities to come for compensation.

On their part, the Nigerians say there was no real compensation as only arbitrary amounts were paid them. Ibrahim Sale, son of the Mangwa or quarter head of Alang said, “some people were given 3000 Naira about 6000 FCFA or US 10 dollars. What can somebody do with such an amount? Look at Lybia, Qatar, Dubai, Saudi Arabia and Equatorial Guinea. These countries use their resources to develop their infrastructure and people.”

Kashimbila does not look like a town which has sacrificed much to host such a gigantic project to benefit five states in Nigeria. No pipe borne water could be seen in the town. People still pay Garuwa (water boys) to draw water from katsina Ala to cook, clean their homes and water animals. The palace of Gar Gadin Kashimbila (Chief of Kashimbila) is dilapidated sitting across broken culverts damaged by the dam contractors. Rain water now runs into homes since most culverts have been blocked by mud deposited by company.

It is worst upstream where all the tributaries of River Katsina Ala have been flooded and contaminated. All surface and underground water has been contaminated and the water smells like a million decaying corpses. After three months of flooding, some people upstream manage to drink water from the rain. There is no single drop of potable water along the Katsina Ala River basin.

Children have started looking sick and an outbreak of cholera, typhoid and other waterborne diseases malaria is just a matter of time for it to happen. Mosquitoes have multiplied exponentially and swarms assail you if you are blocked on the way and forced to stay the night in the affected area.

“If this company does not wipe us out malaria would soon kill all my people,” said Rev Pastor Sara of the Cameroon Baptist Convention, Ezong. To make ends meet in this difficult environment, he commutes to Bariki during the week to teach at a primary school there.

Christopher Fada, deputy youth chairman of Kashimbila says it would seem the management of the dam keeps them near the project simply for tourism purposes. “The Project manger never intended us to be part of the project. We are just here as part of a circus to be presented to the influx of tourists as the last vestiges of the primitive tribes of Eastern Nigeria.”

Some of the new homes built from the compensation money on the Nigerian side are ten times worst than the homes swallowed by the dam water. The compensation would not last 12 months in the hands of these indigenous people who would now have to grapple with the man-imposed scorch of hunger.

“This is one of the worst projects in Nigeria. We could not oppose for fear of political witch hunting. During the last president (Goodluck Jonathan) some of our elders would report us and we would be arrested and detained,” said Dauda Audu a boatman. “Nigeria is a unique country where you would be presented as an enemy for opposing what the incumbent President wants. Our elders gave their consent out of fear,” Dauda lamented.

On the Cameroonian side Etsem Jeremiah of Ezong says, “It would seem the government of the Cameroons does not consider us Cameroonians, Just as the Federal Government of Nigeria believes most of the people in Taraba State are not Nigerians.”

The indigenous peoples of the Katsina Ala Basin are victims of an infamous 1961 plebiscite organized by the United Nations for these peoples to vote whether to join the Federation of Nigeria to attain independence or join the Cameroun Republic. The Katsina Ala Basin is a true test on dual nationality experiments as many people are Cameroonians and Nigerians at the same time.

As I return to the field to see what would be left after a few days of walking into town to look for telephone network and electricity to power my gadgets, be sure that more houses in the villages would have been devoured by the water from the Kashimbila dam. The water keeps rising uncontrollably, minute by minute.