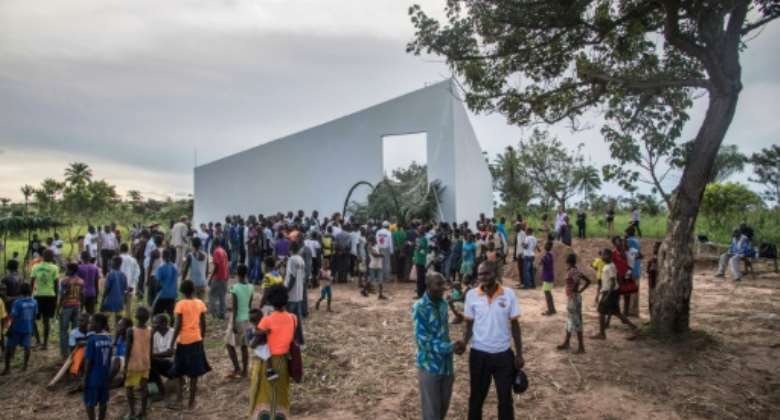 Lusanga (DR Congo) (AFP) - There is no tap water, electricity or shops in Lusanga, a Congolese town once known as Leverville where the Dutch-British conglomerate Unilever long ran a profitable palm oil plantation.

But the 15,000 onetime workers living on the land recently found new hope in a stark contemporary art centre called the "White Cube" which stands somewhat strangely on the African skyline.

Funded in part by chocolate sculptures and aimed at redressing the wrongs of the colonial past, the project seeks to promote local art and crafts while helping breathe new life into sustainable farming.

The town in the southwest of the Democratic Republic of Congo was built after British soap-makers William and James Lever bought a huge plantation in 1911 in what was then known as the Belgian Congo.

It had been acquired by the Belgian state from King Leopold, who had been the founder and sole owner of the Congo Free State.

He made a massive personal fortune from ivory and rubber and is blamed for causing millions of deaths in the process.

After acquiring a string of soap firms, the Levers eventually turned their company into a global conglomerate which two decades later became Unilever.

By 1930 it employed a quarter of a million people and was the largest company in Britain.

But in the early 1990s, the corporation closed down its Congolese plantation and soap-making facilities.

Now in Lusanga the art centre "will help us turn our backs on misery," said Maman Aimee, wife of a former plantation worker.

Artists perform at the inauguration of a art gallery in Lusanga, funded by local artworks reproduced as chocolate sculptures

Yet this month there were no hotels or inns available for the guests who travelled 570 kilometres (355 miles) from the Congolese capital, Kinshasa, for the April 22 opening of the centre.

They had to sleep with the locals or put up tents.

The six-metre (20-foot) high centre itself, which still lacks a roof, is to be used as a gallery for local artists.

Its backers say it is a symbol of the museums built in the West in the 20th century thanks to the huge profits made from exploiting natural resources in the African colonies.

Dutch artist Rezon Martens, a backer of the Lusanga art centre, says plantations helped art in the West, now it's time to pay back

"Plantation workers have helped the art world. Now it's up to the art world to help the plantation," said Dutch artist Renzo Martens.

He is one of those behind the Lusanga International Research Centre for Art and Economic Inequality (LIRCAEI) which launched the scheme in partnership with the local Congolese Plantation Workers Art League.

To fund the gallery, local artworks made of clay were scanned and reproduced in Europe and North America in chocolate. Their sales raised around $60,000 (55,000 euros).

The funds have been set aside to start a new plantation of thousands of palm oil trees, cocoa trees, avocados and more.

Some will also be used to fund art projects and to fight deforestation.

Local resident and upcoming artist Lisette Mbuku, who plans to use the cash from the sale of a sculpture to open a small store, believes the art work will be more profitable than the trees.

But there are those who remain sceptical.

Congolese artist Witshois Mwilambwe Bondo, for instance, said the presence of Martens at the inauguration highlighted the persistance of "a slightly colonial relationship."

"To get things done we have to have a white man here," he said.