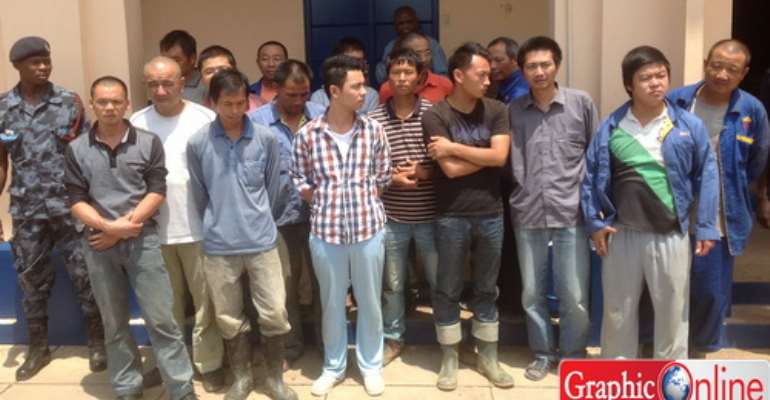 I read the recent China Mission’s letter to the Ministry of Lands and Natural Resources with an extreme disappointment and puzzlement.

Parts of the said letter read: "The Chinese side is very concerned about this unhealthy tendency. We hope the Ghanaian government will pay due attention to this situation, take necessary action to stop such things from happening".

"We sincerely hope that the Ghanaian government shall take responsibility of guiding the media and requesting them not to publicise such defamatory reports or stories against Chinese leaders, officials and the Chinese government.

“This will help create a sound environment for our joint efforts to address this issue and the continuous development of our bilateral relations" (ghanaweb.com/myjoyonline.com, 08/04/2017).

Our security services therefore have no option than to arrest and detain the recalcitrant Chinese immigrants, who are forcibly digging our natural resources and in the process destroying our sources of drinking water. I, for one, salute our security services for the good work done.

“Every mineral in its natural state in, under or upon land in Ghana, rivers, streams, water-courses throughout the country, the exclusive economic zone and an area covered by the territorial sea or continental shelf is the property of the Republic and is vested in the President in trust for the people of Ghana.”

Let us therefore humbly remind the China Mission that subject to subsections (1) of 1989 small-scale mining laws (PNDCL 218) and (2) of section 75 of the Minerals and Mining Law, 1986 (PNDCL 153) and amended Act 2006(Act 703), no licence for small-scale gold mining operation shall be granted to any person who is not a citizen of Ghana.

Thus, in theory, any person who without a licence granted by the regulatory bodies and chooses to undertake any small-scale gold mining operation contrary to (subsection 1) of section 1 of small-scale mining law; or acts in contravention of any other provision of small-scale mining law in respect of which an offence has not been prescribed, shall be guilty of an offence and shall on conviction be liable to a fine, or to imprisonment for a term not exceeding 2 years or to both.

More importantly, where a foreigner is convicted of an offence under this Law he, shall after paying the fine or serving any imprisonment imposed on him, be liable to deportation under section 13 of the Aliens Act, 1963 (Act 160).

Apparently, the Minerals law was amended in 2014. “Just like Act 703, the law criminalises illegal small scale mining, popularly known as galamsey, but unlike the old law, it criminalises mining by foreigners and Ghanaians without a permit.

“Clause two of the new law criminalises the engagement of foreigners in small-scale mining operations and also makes it an offence for a Ghanaian to employ or engage a foreigner to undertake or participate in illegal small scale-mining activities.

“Clause three of the law empowers the court to order the forfeiture to the state of any mineral extracted as a result of the offence, while clause four ensures strict liability for offences committed under the law.

”An accused person could be convicted even if it is proven that he or she did not knowingly commit the offence.

“Under the new law, a person who sells or buys minerals without a licence granted or without valid authority commits an offence and is liable to a summary conviction to a fine of not more than 3,000 penalty units or to a term of imprisonment of not more than five years or to both.

“A Ghanaian who employs or engages a foreigner to illegally undertake or participate in small- mining scale in the country commits an offence and is liable on summary conviction to a fine of not more than 17,000 penalty units or to a term of imprisonment of not more than 10 years or to both” (See: www.graphic.com.gh/news/politics/parliament-passes-minerals-mining-law.html

).
With all due respect, China Mission should take cognisance of the fact that the Ghanaian authorities are only seeking to enforce the laws of the land. Suffice it to stress that the Republic of China would not hesitate to do same if found itself in such a position.

In fact, it is quite worrying and extremely disappointing for China Mission in Ghana to overlook Ghana’s unparalleled cordial reception towards foreigners.

Indeed, Ghanaians are known for showing exceptional cordiality towards visitors. Ghana has thus signed and ratified the International Convention on the Protection of the Rights of Migrant Workers and their Family Members.

Ghana ratified the International Convention on the Protection of the Rights of All Migrants Workers and Members of Their Families (the UN Migrant Workers Convention), on 8 September 2000 (See: http://www.migrantsrights.org/Ratificationchart.htm ).

It is, however, worth emphasising that Ghana is not obliged to protect stubborn illegal miners per the provisions of the International Convention on the Rights of all Migrants Workers and their Family Members.

And, with all due respect, China has neither signed nor ratify the International Convention on the Protection of the Rights of All Migrant Workers and Members of Their Families (ICRMW)( See: www1.umn.edu/humanrts/research/ratification-china.html -).

Interestingly, the International Convention on the Protection of the Rights of All Migrants Workers and Members of Their Families is one of the numerous core international human rights treaties. So by ratifying the treaty, Ghana has demonstrated its willingness to protect migrant workers and their family members.

Likewise, migrant workers have a duty to obey the laws of the land. Suffice it to state that it is on record that some Chinese immigrants are illegally mining our natural resources, and destroying the environment in the process.

What is more, the illegal miners are poisoning our sources of drinking water with mephitic mercury and cyanide.

“Mercury is freely available in shops and can be bought with a canister, bottle, or as a ball wrapped in a plastic cling film. Much of it has been brought in by Chinese miners.

Given the dangers associated with mercury and cyanide exposure, our elected president, Nana Akufo-Addo, has no option than to halt the activities of the illegal miners.

Let us therefore respectfully remind China Mission that no one is above the laws of the land. Indeed, the inviolability of the state sovereignty supersedes any other interests.

What is more, Article 1 (2) of the United Nations International Covenant on Economic, Social and Cultural Rights is emphatic on self-determination and the ownership of natural resources.

It emphasises: “All peoples may, for their own ends, freely dispose of their natural wealth and resources without prejudice to any obligations arising out of international economic co-operation, based upon the principle of mutual benefit, and international law. In no case may a people be deprived of its own means of subsistence” (UN 1966).

More importantly, under no circumstances whatsoever, should any country and for that matter, a citizen of such country, choose to trample upon the inviolability of one’s sovereignty.

And more so Article 9 of the 1993 Vienna World Conference on Human Rights affirms that “least developed countries committed to the process of democratization and economic reforms, many of which are in Africa, should be supported by the international community in order to succeed in their transition to democracy and economic development.”

Bizarrely, however, in spite of the fact that by law, only Ghanaians are allowed to obtain mining licenses for small-scale mining operations, “thousands” of Chinese and other foreigners are working in the small scale mining sector in Ghana.

“The involvement of the Chinese has changed the dynamics of small-scale mining,” the head of the Ghana Chamber of Mines, said in an interview.

“They use bulldozers, pay loaders and really heavy machinery. They have in fact mechanized artisanal mining and as a result the level of environmental devastation is huge.”

In so far as the China Mission has the interests of their citizens to protect, the Mission should not deflect from the Republic of China’s foreign policy of non-interference and desist from undermining the work of the government of Ghana.

District Hospitals for Volta will be delivered – Regional Mi...
7 hours ago