Rare protest in Angola as 200 march for abortion rights 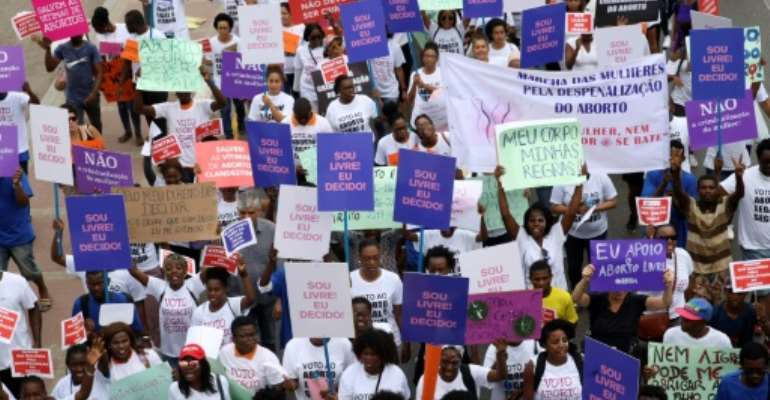 Hundreds of Angolans hold placards and shout slogans as they march to protest against a draft law that would criminalise all abortions. By AMPE ROGERIO (AFP)

Luanda (AFP) - About 200 demonstrators protested under heavy police surveillance in the Angolan capital Luanda on Saturday against a draft law criminalising all abortions.

The proposed new penal code has been sharply criticised, including by Isabel dos Santos, reported to be the richest woman in Africa and the daughter of veteran President Jose Eduardo dos Santos.

The mostly female protesters chanted "Freedom for women", "Prison will not solve anything" and "Let us decide", before dispersing after about two hours.

Public protests are rare in Angola and can often be targeted by Angola's security forces, but the peaceful march was allowed by authorities.

The draft penal code, currently before parliament, punishes anyone who has an abortion or performs one with up to 10 years in jail.

"The government or lawmakers have no right to decide whether we must have a child or not," Lauranda Gouveia, a marcher, told AFP.

"If this law is passed, women who get pregnant after rape will have the choice of trauma, prison or possible death after a clandestine abortion," added Sizaltia Cutaia, of the local Open Society activism group.

The draft code was strengthened after lobbying by church leaders and has triggered public debate.

Dom Manuel Imbamba, spokesman for the Episcopal Conference of Angola, told AFP that it supported the anti-abortion law, saying "life cannot be negotiated or trivialised."

The ruling MPLA party on Thursday said that a vote in parliament next week had been postponed.

Angola, which had been ruled by President dos Santos since 1979, is updating its 1886 penal code dating back to the Portuguese colonial era.