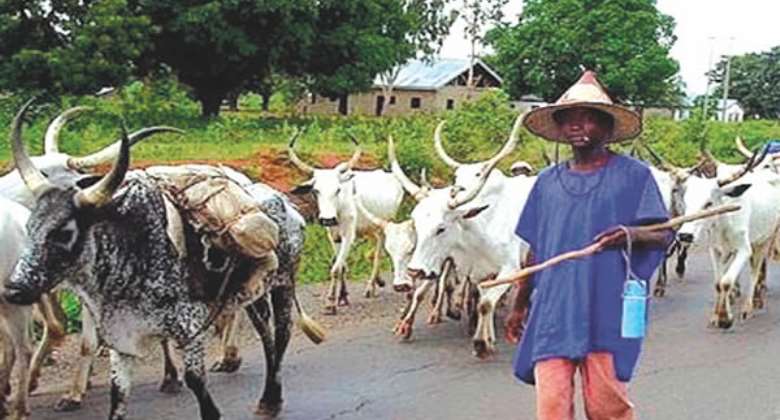 Once again, the Fulani conflict is here with us. This is one annual ritual, which we have failed to deal with in years past. Every year, Fulani’s clash with indigenes of some farming communities over the former’s inability to control their livestock from wreaking havoc on the latter’s source of livelihood. For as long as this problem has existed, no permanent solutions have been offered. Not even the usual joint police and military task forces with such hilarious code names as “Operation Cow Leg and Operation Drive Cattle from Farms” have been able to see a successful elucidation to the menace.

Indeed, the Fulani have been mostly identified to be nomadic. Up until this time, history of their origin is still unknown. Although the Fulani have no recognizable history as an indigenous Ghanaian ethnic group, there are numerous of their kind existing either legally or illegally in our country with some involved in legitimate businesses whiles others are busy soiling the name of the Fulani’s. Besides, this is the civilized world of the twenty-first century and not the first century.

And in as much as the human right of Fulani cattle herders to a decent livelihood cannot be either gainsaid or rebutted, nonetheless, such eking out of their existence must not, under any circumstances, be carried out at the expense of the sedentary farmers of the Ashanti, Eastern, Western, Northern, Brong Ahafo and Volta region areas of Ghana which are predominantly the target of assault by these intruders. Whereas interested parties in this canker are voluminous and the long-tailed nature of this menace, a permanent solution is still farfetched.

There are many documented instances, in which our farmwomen with their female ward both adolescents and children are raped brutally with impunity by Fulani cattle herdsmen. There is also the gruesome murder of those men who either protest the raping of their women or the destruction of their crops. At other times, this social misfits set fire to bushes just to allow the grass to sprout for their herd only for the fire to destroy many aches of an underprivileged farmers livelihood. This is prominent during the dry season when pasture becomes a scarce commodity. Anytime one recalls these wanton acts of depravity by the Fulani herdsmen who have gradually acquired the title of a Primitive Predator, there is a violent eruption a desire to retaliate. This is what has been fuelling the conflict between our people and the Fulani cattle herders for the past decade or more.

In time of the belligerence and bellicose posture of the Fulani’s, we hear such beautiful statements from the authorities like, “the activities of the herdsmen have impacted negatively on the social and economic development of the area and only stringent measures would avert disastrous consequences.” But nothing happens afterwards. The glaring lukewarm attitude that authorities have adopted so far, is also not helping matters and if care is not taken, worse than what we have already heard and seen would be perpetuated on innocent farmers and their livelihood. Just like the menace of illegal mining popularly referred to as Galamsey, it has been alleged that some stakeholders such as chiefs, Police and Military commanders and even MMDCE’s have acquired the services of these nomads. It is therefore making meting out punishment to offending Fulani cattle herders more twisted than it looks. Could this be the reason why a permanent solution is still farfetched?

Whereas this headache continues to worry our head, there some people who are giving out several perspectives to the menace saying, the Fulani’s are Ghanaians and therefore, it would be an illegality to expel them from the country for their unscrupulous activities. Accurate or not, should they use that as a basis to trample upon the economic right of fellow Ghanaians by marauding their cattle on people’s farms?

The Fulani’s are traditionally nomads whose activities are largely influenced by such natural forces as water and pasture. Despite they not having any permanent place of habitation, anywhere they step their foot, regardless of wherever it is, they become the Lords instead of subjects and does whatever pleases them. The Ghanaian hand of hospitality extended to these herders is without doubt beyond the reach of where their activities have reached now.

In the heat of the political campaign in 2016, almost all the aspirants pledged a lot of devotion in getting rid of the menace when given the nod. The then aspirant of the NPP and currently the president of the Republic, His Excellency Nana Akuffo Addo gave a strong assurance to the people of Agogo to solve the age-old menace, for the last time. As the days go by, we hope the words of honour would not only be suitable for an election ambience. As His Excellency rightly puts it on the campaign platform, Brazil has a population of 200 million inhabitants and 213 million cattle but is never been heard of to have a problem relating to cattle rearing. It is awful how we are struggling with just the little cattle we have in the country.

The required solutions should include the creation of a grazing/cattle community with requisite needs such as source of water or even the creation of a drought sustainable pond in the community and making sure all herders stay within the perimeters of the community with their cattle in ranches in the same community. This would compel the herdsmen to cultivate hay for serving their animals and completely curtail indiscriminate grazing. If the herders themselves cannot grow the hay, it presents another avenue for other farmers to grow hay for sale.

Additionally, there should be a system for the registration and subsequent licensing of Fulani cattle herders and their cattle. The license, which would be renewable within a reasonable period, would guarantee the tracking of each Fulani herder and also the population of the cattle in the country. Those who would fail deserve nothing but total seizure of their entire cattle and immediate deportation to wherever they came from. As well, the long-standing proposition of a Cattle Ranching Law should be high on the agenda of our Legislators. The mere absence of regulatory legal framework exposes the herders’ menace to much impunity.

We have had enough from these nomads. It is time to pull out the rotten tooth.