Ghana Needs Mix-Energy Generation To Get Out Of Doldrums! - Part 2 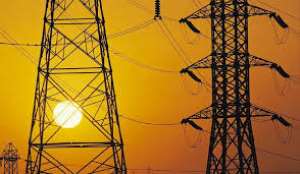 ..I had watched attentively albeit a bit disoriented, a tv programme hosted by two nigerians in which, somehow, the two implied that due to 'constant' electric power supply in Ghana, Ghana would have been 'El Dorado' for them and would care less when it should come to footing electricity utility bills..

In part -1 of these opinion series, l brought to bear how just one American owned company, VALCO is entitled to 80% of total 1020 megawatts of hydroelectric power generated by Akosombo or Volta dam

Ghana, Togo and Republic of Benin will have to console themselves with the rest 20%. which is 200 or so megawatts. Which caters for a little more than 60% of Ghanaian domestic utility needs hence we must have other alternatives to fill the gap

Hence, the nationals of de facto giant of Africa are drawing conclusions from the excess amount of money that they spend on generators kept as backup in times of power outages and its circumspect comparison to that of Ghana

In bid to meet with domestic utility electric power needs and have reserve to attract foreign investors, most African countries, despite having hydroelectric power source, have started capital intensive renewable sources to generate electric power

African country like Uganda has extensively invested photovoltaic electric power generation, where some governments are considering 'sun tax' for solar or 'wind tax' for wind mills that are fixed with turbine to generate electric power

if Ghana, wants to be energy efficient and sufficient we must concentrate drastically on sources other than hydroelectric, and thermal source is not sustainable because of high cost natural gas

Most countries in Europe, US, Japan, China, India etc. Nuclear power production forms more than 65% - amounting to thousands of megawatts - on the energy prospective countries' national grids while thermal and renewable serve as supplementary sources

Latest in Africa is geothermal source, which consists of drilling wells in steam fields and connecting the wells with water recirculating system to turn turbine which generates electric power, and Kenya is the driving force and pioneer in Africa

Geothermal is the cheapest and efficient way to generate electric power and according Oserian Development Company in Kenya, with just 3 megawatts to power rose farm facilities, the company is now saving close to a $1M every year

According to CNN, just one field, olkaria steam field has capacity of 1000 megawatts, and if l should have my information correct, Kenya has discovered more four of such fields so far. Curiously, a well costs just $6M to drill. Just a fraction of Turkey barges deal

This in no means to suggest that the geothermal is only source of electric power production in Kenya, they also have hydroelectric(dam), thermal(gas), Solar etc

So imagine the megawatts on Kenyan national grid after all the geothermal fields, hydroelectric, photovoltaic, etc. are operational, the total megawatts will be nothing compared to 200 megawatts of Ghana or more than 200 megawatts of Nigerian

Finally my nigerian tv hosts judgement should be based on standardized possibilities of thriving developing countries, rather not on two deficient power generating countries, Ghana and Nigerian

And if we have to go by the general wisdom of to whom more is given much is expected, Ghana and Nigerian are by far behind expectations in terms electric power generation

Comment: Power is amount of energy generated or consumed and megawatts in heat energy is not the same as megawatts in electric power but above all else, my concern is how to solve what has become known in Ghana as dumsor

Let’s avoid violence, anything that will tarnish image of NP...
48 minutes ago