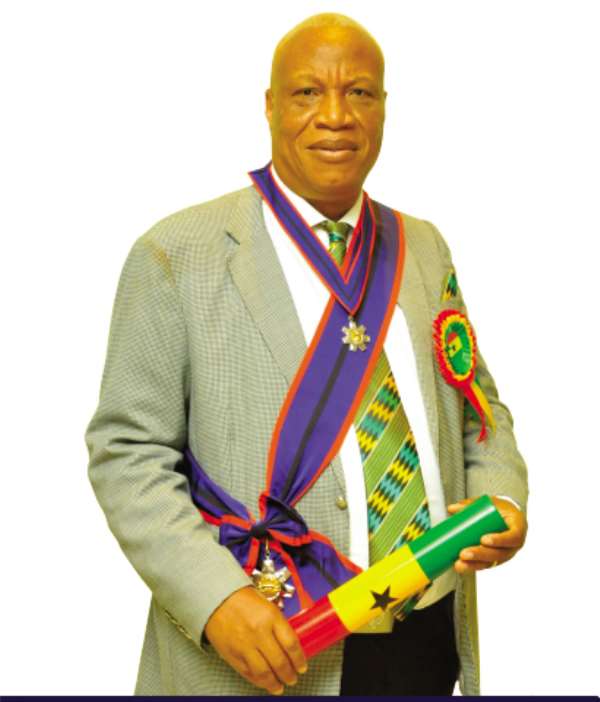 It was a special thanksgiving service to God on behalf of Professor Joshua Alabi, the outgoing First Vice Chancellor of the University.

Before the special thanksgiving service on Friday, the Students Representative Council (SRC), and other student groups had organized events to show their love to the outgoing Vice Chancellor.

As I sat through the ceremony, it became clear to me that staff and students of UPSA were very proud of the achievements of Professor Alabi’s tenure and were also proud to be students and staff of the University.

In his own words, Professor Alabi expressed how he was amazed by the love shown him by students he has put “pressure” on to pay school fees and for the staff who he has “screamed” at to make sure everything is perfectly done so as to meet the University’s goals.

But in all these, students and staff of UPSA have helped in what we can now be called a global university.

Unfortunately, I am not able to show pictures of the then IPS/UPSA and the current transformation that has taken place, but I am very sure both new and old students of IPS/UPSA would attest to the fact that the University has not just grown but it is living to its vision thus,

“To be the world class education provider in both academic and professional discipline, nationally entrenched, regionally relevant and globally recognized.”

For many doubting Thomases, I believe that a visit to the university would not be a bad idea at all.

Professor Alabi can be described as humble, affable, team player, a visionary team leader, a listening, fair but firm and emphatic leader.

His sterling leadership qualities are not limited to academia, but spans across politics and sports administration.

Even as a student, Prof. Alabi was an Ambassador for Ghanaian students in Europe, holding the positions of:

With over twenty-five (25) years of professional practice, Prof. Alabi has held a number of international, national, institutional and administrative positions.

Now let’s get to know Professor Alabi as told in several publications locally and internationally.

About Professor Joshua Alabi
Prof. Joshua Alabi is an Economist by training and a Marketer by Profession born on 1st March, 1958. He obtained an MSc. in Industrial Economics from Moscow Institute of National Economy Now Russian University of Economics (Plekhanov) in 1986 and an MSc. in International Marketing from the University of Strathclyde, Glasgow, Scotland in 1992, where he was awarded the Moshood Abiola Prize in International Marketing.

He later became the first Vice-Chancellor of the University from September 2012 to 31st December 2016.

Prof. Joshua Alabi’s contribution to national development, education and the transformation of UPSA has been recognized and celebrated by many.

On 29th October 2016, The President of the Republic of Ghana, His Excellency John Dramani Mahama awarded Prof. Alabi the “Officer of the Order of the Volta” a National award recognizing his contributions to the transformation of UPSA and other national contributions.

In July 2015, Prof. Alabi received another award from the Chartered Institute of Bankers (CIB) in recognition of his contributions towards transforming the former Institute of Professional Studies to a fully-fledged University, and for his excellent performance in the financial landscape.

The All-Africa Students Union in 2013 celebrated him as the Africa Vice-Chancellor of the year for 2013.

In 2012, IMANI Ghana, a policy and accountability think-tank, also recognizing his contributions to the phenomenal change of the University of Professional Studies, Accra named him the Most Influential Public Sector Leader for the year 2012.

That same year (2012), the Chartered Institute of Marketing Ghana (CIMG) awarded him the Marketing Man of the Year, the highest professional recognition in this field.

At the national level, Prof. Alabi has contributed as follows;

• Chairman for the Board of Trustees for Social Security and National Insurance Trust (SSNIT).

• Chairman of the Board of Directories - HFC Bank in Ghana.

• Chairman of Governing Council of the Accra Polytechnic

• Member of Ghana National Commission for UNESCO as well as Chairman of the Social Science Committee of UNESCO Commission of Ghana, from May 2009 to 2014.

• Member of the Governing Council of University of Professional Studies, from 2001-31st December, 2016.

In politics:
• Professor Alabi was a Member of Parliament for the Krowor Constituency in the Greater Accra Region from 1997 to 2001

• Minister of State for the Greater Accra and Northern Regions between 1997 and 2001.

At the International level, Prof. Alabi was:
• A Member of the Group of Experts of the Executive Board of UNESCO (Paris) in September 2011,

• Member of the Executive Committee and Chairs the West Africa Region of the International Association of University Presidents, from June 2011 to date.

In the field of sports, Prof. Alabi has handled the following portfolios:

He is also a Member of the Chartered Institute of Marketing, Ghana (CIMG) and a fellow of the Ghana Institute of Taxation.

Another interesting thing about Professor Joshua Alabi is that, he did not need to know your father nor godfather before he considered you in his scheme of things. You just needed to prove to him that you are hardworking and you will be part of his team.

Supportive Wife
It is true when it is said that behind every success man is a woman. Professor Mrs Goski Alabi can be described as a supportive wife who has been with Professor Joshua Alabi through thick and thin to make UPSA what it is today.

According to Professor Joshua Alabi, Professor Goski suffered a lot of humiliation because of him, “She was attacked and called all sorts of names because of me…” Professor Alabi added during the special thanksgiving service.

And for me, Professor Goski has been the pillar of strength to the out-going Vice Chancellor. She is indeed special to Professor Joshua Alabi.

Professor Goski was duly acknowledged and praised by Professor Joshua Alabi at the special thanksgiving service.

I have interacted with her personally and I must say she is very humble and down to earth.

She is simple, affable, hardworking and respects everyone no matter their social status. A good listener and a team player. But she can make you work, work and work. She is indeed a role model and mentor.

Conclusion
I believe the good Lord has used this great, kind and visionary man to achieve a lot for Ghana, Africa and the world.

This is because one cannot catalogue enough, all he has done, in terms of physical infrastructure, vast improvement in the institution's enrolment, the expansion and modernisation of the university to keep pace with the quality needs of a 21st Century University, staff capacity building and the development of sound academic programmes at UPSA.

He was always at his desk thinking of how to make UPSA great.

I can only pray for him and his family for God’s guidance, and for God to grant him higher positions of responsibility to prove further his God-given talent as a seasoned administrator and academician.

Congratulations Prof.!
I wish to conclude with Professor Joshua Alabi’s favourite song as sang at the special thanksgiving service by himself.

My faith has found a resting place,
Not in device or creed;
I trust the ever-living One,
His wounds for me shall plead.
Refrain:
I need no other argument,
I need no other plea,
It is enough that Jesus died,
And that He died for me.