How A Clinton Victory Would Powerfully Unite The Right 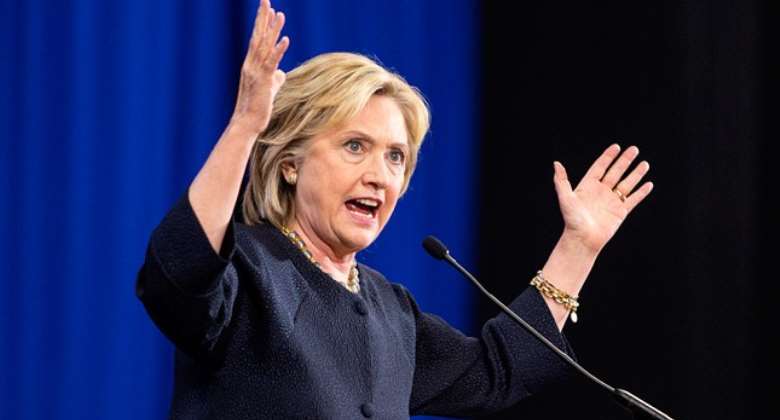 In a previous column I considered how the coalition that is the Vast Right Wing Conspiracy began to fray after losing the common enemy against which it had united:

In 1988, as reported by the LA Times, one of President Gorbachev’s key advisors gave away the game. “Our major secret weapon,” said Georgi Arbatov, director of the Soviet Academy of Sciences’ Institute for U.S and Canada Studies, “is to deprive you of an enemy.”

That column explored how the loss of its common enemy -- the USSR -- caused the right wing coalition to begin to fray and unravel and, thus, the GOP to lose its moorings. That column also pointed out how the election of Donald Trump could be one way to reunite the right.

If Hillary Clinton wins the presidency, though, her victory holds the distinct possibility of even more fundamentally uniting the right, bringing the GOP back to its core values of peace, equitable prosperity, and human dignity.

How might this be?
Clinton, a center-left Neoliberal, could well portend a Götterdämmerung for the classical republican order, galvanizing the right in ways that President Obama never quite did. Clinton lacks President Obama’s suaveness, and the opportunity that would be afforded to her to constitute a center-left Supreme Court would be catastrophic to major elements of the conservative coalition.

For these reasons, the right is more likely to recognize the fact that a mortal enemy, a worthy successor to the USSR, has definitively emerged. Clinton, by preponderance of evidence a nurturing and idealistic person, is not that mortal enemy. Yet she would be its loyal agent.

The true mortal enemy is what I have elsewhere called a “Cultural Revolution.” It is an ongoing effort to replace the classical liberal republican order with an egalitarian democratic cultural hegemony.

This struggle has been mistaken for a “culture war,” a very different thing. The right has been stymied by applying ineffectual “culture war” tactics. Thus the left has racked up a long string of tactical victories.

The left is proposing and imposing a brand new cultural hegemony, one antithetical to classical liberal republican principles. The left is winning almost all the skirmishes. It is poised to win the Cultural Revolution. The left’s proposed cultural hegemony is one of undifferentiated sameness. They characterize it as “equality.”

To give the left credit, it believes this to be the legitimate recipe for happiness. That said, there is precious little evidence for that belief.

The left’s radically egalitarian ethos applies across-the-board: in economic policy, foreign and defense policy, and social policy. Under this new cultural hegemony no distinctions are permitted. This is the left’s meta-narrative and strategic objective.

It’s a real and radical Cultural Revolution.
To provide a few examples:
In economic policy, “income inequality” is indicted as illegitimate, irrespective of whether wealth was honestly earned through the production of life-enhancing goods and services (or inherited from such a wealth creator) or realized through force, fraud, or coercion. Income inequality is cast by the left as suspect and presumed inherently wrong.

In foreign and defense policy, American exceptionalism — implying distinction — is indicted as illegitimate. That is notwithstanding America’s heroic history of deploying our military not for conquest or imperialism but to take on, and down, tyrants and dictators.

In social policy, religious moral codes are indicted as illegitimate bigotry rather than something (explicitly) protected by a First Amendment right. Moreover, the distinction between men and women is overthrown in favor of ‘gender fluidity.’ Aspects of free speech are held illegitimate. The left indicts statements they find offensive as ‘microaggressions’ and characterizes controversial statements as demanding ‘trigger warnings.’

In politics, the Tea Party’s exercise of freedom of assembly to petition the government for the redress of grievances is indicted as the act of an illegitimate mob. The right to free speech recognized by Citizens United is under continued attack. An enormous number of political “reforms” are being proposed, from abolishing the electoral college, to changing congressional districts, to ranked voting, to wholesale restoration of the right of convicted felons to vote, and to “ballot access.” Curiously, all favor the left.

The list of progressive victories is long, and is getting longer. If a Democratic president is elected, the left will have final and plenary victory within sight.

Unless the right wakes up.
The common denominator of the left’s worldview — radical egalitarianism — is de-legitimizing distinctions. This represents the left’s strategic objective and unifying theme.

Once recognized for what it is — a Cultural Revolution — all of the factions of the right can once again put aside differences and unite again against a newly recognized common enemy, one as anathema to all as was communism.

The USSR, when confronted by Reagan, proved much less indomitable than supposed. The Cultural Revolution, too, is a paper tiger. Reunited, the right is likely to prevail quickly in restoring classical liberal republicanism.

Although none dare call it nihilism much of the left’s program defies common sense or at least America’s deepest social ethos. The left’s victories are mostly being won in apolitical arenas: the courts and regulatory bodies. Thus its gains are brittle, not resilient. If confronted with clear vision and sound strategy, the left’s edifice would fall like a house of cards.

The left’s strategy and tactics are brilliant, yet its resources are shallow. The left is winning not because it is strong but because it has a clear objective and a coherent strategy which the right lacks. The right also has the further disadvantage of being confused about the left’s central objective: radical egalitarianism. Thus, the right’s attempts both at defense and offense have proved ineffectual.

America lost the Vietnam war because of General Westmoreland’s reliance on WWII-era tactics of overwhelming force. The US military regained its effectiveness when the young David Petraeus later rewrote our war fighting doctrine around the axiom that we will succeed by getting the people on our side.

The Republican consultant class still relies on the discredited tactic of overwhelming force. “War is politics with the addition of other means.” The recognition of the relevance of the Petraeus Doctrine to politics — the axiom that we must get the people on our side — can allow the right to forge an irresistible “pursuit of happiness” coalition.

If its factions will put aside their differences, the classical liberal republicans have the wherewithal to win big. Ironically, a Hillary Clinton victory would likely unite the right with paradoxical political outcomes.