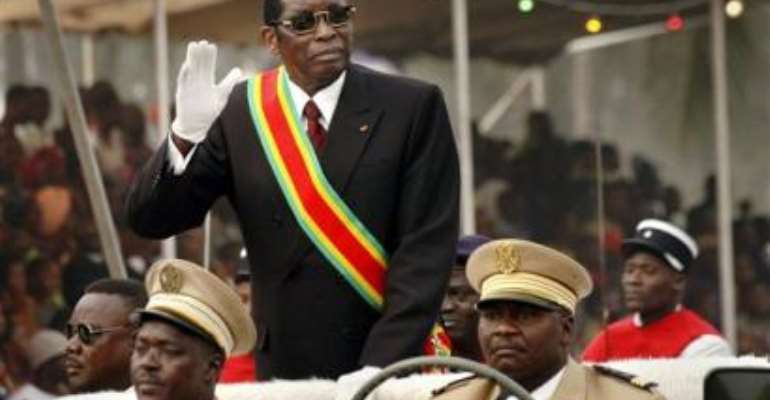 .... Military installs son in "coup d'etat" ... AU/World Leaders condems transition of power ... Hundreds of people stranded at Ghana-Togo border. President Gnassingbe Eyadema of Togo, Africa's longest serving ruler, has died at the age of 69, the government said in a statement released in Lome on Saturday. The statement said President Eyadema died as he was being evacuated for emergency treatment abroad. "It is a national catastrophe. The president of the republic, Gnassingbe Eyadema, is no more," it added. President Eyadema, a former army Sergeant, seized power in 1967 after staging one of Africa's first coups soon after Togo won independence from France. In the style of the time, President Eyadema ruled unchallenged for two decades and did not face a multi-party election until 1993, when the collapse of Communism in the Soviet bloc led to a wave of pressure for change across Africa. The European Union suspended aid to his country in 1993, in protest at alleged voting irregularities and human rights violations. Both then and in 1998, Mr Eyadema secured re-election, but after ballots criticised as unfair not only by his opponents -- who include the son of the man he overthrew, Togo's first President Sylvanus Olympio. In 2003, the Togolese Parliament voted to remove a clause in the constitution, which would have barred him from standing for re-election. He however, was declared the winner of presidential elections in June of that year. He had been ill for a number of years, and had travelled abroad on several occasions for medical treatment. President Gnassingbe, held leading positions on the African continent including, the rotational chairmanship of then Organisation of African Unity, now Africa Union, and the Economic Community of West African States (ECOWAS). Responding to a call from the Ghana News Agency (GNA), Dr Mohamed Ibn Chambas, Executive Secretary of ECOWAS said the regional body was saddened by the death of the Togolese President. "He was a pioneer of the ECOWAS ideals and objectives of socio-economic development of member countries. He will be, especially remembered for his leading role in regional efforts to restore peace and stability in trouble spots of the region, particularly in Sierra Leone, Liberia, and recently in the Ivory Coast," Dr Chambas said. On his part, Ghana's Foreign minister, Nana Addo-Dankwah Akufo-Addo expressed the hope that the country would not degenerate into chaos as a result, Mr Eyadema's death but rather, the people should move forward in unity. "I urge the people of our sister country to remain united and with unity of purpose, work towards stability and true democracy to advance the course of development," Nana Akufo-Addo told the