Collins Dauda Is A Confused Minister 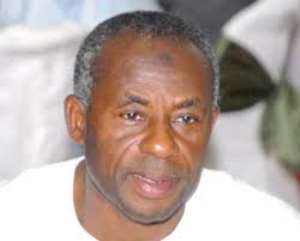 It is left to be confirmed whether Hon. Collins Dauda, Minister of Local Government and Rural Development, did indeed say that Nana Addo and the NPP will discriminate against Muslims when elected as President of Ghana on December 7.

If indeed he said that which he has not denied so far, then he is either confused or doesn't know the definition of the word discrimination.

How can the same party that has Alhaji Dr Mahamudu Bawumia as vice President in waiting be accused of discriminating against Muslims?

Is Collins Dauda by such a sick thought saying that there are even no Muslims in the NPP now? I dare him to mention the name of a single Muslim in the NPP now who has complained of discrimination against him or her.

For the information of Brother Collins Dauda, if there is a political party in recent times that is profoundly discriminating of Muslims, it is the NDC, his party.

Do we have to remind Collins Dauda of the comments characters in the NDC have in recent times made against Muslims in Ghana?

Is he even aware that the NPP has a convention of always having Muslims as running mate to our Presidential Candidates since 1979?

On the issue of the Aliens Compliance Order (ACO), the Local Government Minister is either deliberately distorting facts or he has been hearing of the ACO but has never made time to educate himself about what it was all about.

It was an issue of the regularisation of stay of Aliens in the country and the ACO was enacted to take charge of that. Most Aliens around that time complied and never saw it as an action aimed at driving away Aliens from Ghana.

The misrepresentation of a simple order to regularize stay and businesses can not just be misinterpreted in this 21st Century.

The NPP was in government between 2001 and 2009. Alhaji Collins Dauda should tell Ghanaians a single Alien who was deported or driven away from Ghana.

You see, we can do our politics without defiling the sanctity of history. It is unacceptable that a Muslim and an Alhaji in the person of Collins Dauda will consciously lie about the NPP just because he wants votes.

I am surprised that it is this same Minister who has presided over chronic discrimination against contractors at his ministry who is talking of discrimination.

There are instances where Muslim contractors have won contracts but not awarded the contract because of political discrimination against them in the very Ministry Alhaji Collins Dauda is Minister.

I have a word for the minister; "If you live in a glass house, you don't have to be the first to throw a stone". A word to the wise enough.