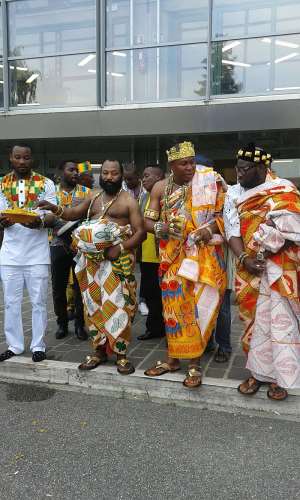 GaDangmes (natives from the Greater Accra Region in Ghana) Associations in Italy demonstrated again the pomp and pageantry that characterizes their annual ‘Homowo’ Festival in the Italian city Verona.

It’s the fifth consecutive time that the GaDangmes Associations in Italy is hosting this event shuttling from one city to another in Italy and this year’s celebration as usual attracted a large pack of onlookers which almost brought traffic to a standstill in the principal streets of Verona.

The traditional display of costumes, drumming, dancing and sprinkling of ‘kpo kpoi’ (a traditional food prepared from corn dough and palm oil), performed by Nii Macbeth Trebi Mensah, got the bystanders curious as they watched the event. The climax of the occasion was when the group descended into the traditional ‘kpashimo’ songs and dance with some of the locals joining and relishing every bit of it.

This year’s event was further graced with the presence of invited chiefs from the Greater Accra Region Region led by Nuumo Osabu Abbey – the stool father of Prampram, who poured libation asking God to bless the land of Italy and Ghanaians living in Italy. The Ghana Embassy in Rome was also fully represented with a team led by Robert Aguba Adombila.

At a meeting later in the day after the carnival procession, the Association laid out its plans to use this year’s celebration by sending medical officers to Ghana to help at certain health centers in the Greater Accra Region. Speaking before the gathering the Associations’ organiser, Christopher Sowah Klu, said the Association has held extensive discussions with BeATLAS team and the Medical Association in Modena - Italy, and in collaboration with BPER Bank and the Ghana Embassy in Rome.

Giving the details, Sowah Klu mentioned that a team of doctors from the Medical Association in Modena will be in Ghana from August 6 and will hold seminars and carry out clinical sessions in conjunction with Lekma Hospital at Teshi in Accra. The exercise will cover some localities in the Greater Accra Region. Among doctors who will be involved in the programme are pediatricians, gynecologists, eye, ear and heart specialists.

He explained further that BeAtlas, is a project of the Italian Group BPER Bank, having the special aim to support Associations of migrants in Italy, in developing and realising their ideas and their projects.

The BeATLAS team, led by Talafio Tailo and Giulo Arsenio, he also mentioned, has been visiting Africa on similar missions and will do its best to make the programme a successful one hoping it will be a yearly event. The team will be hosted in Ghana by the Ledzokuku Krowor Municipal Assembly headed by Hon. Seth Badu Tawiah who has expressed his appreciation to BeATLAS in anticipation to the exercise.

The celebration was marked with the Association honouring some members in the GaDangme fraternity for their distinguished services; among them were: Titus Evans (a.k.a Bishop T – host of a weekend Gadangme programme called ‘Bo Oba Show’ on Hot Digital Radio in London) and Dr. Stephen Bright Okoe (Dr. Brighton) of the Green Fields Scientific and Herbal Medicine, Teshie in Ghana.

Tight security at courts over possible terrorist attack
48 minutes ago

‘We don’t have anything here for Sir John’ – Lands Commissio...
48 minutes ago