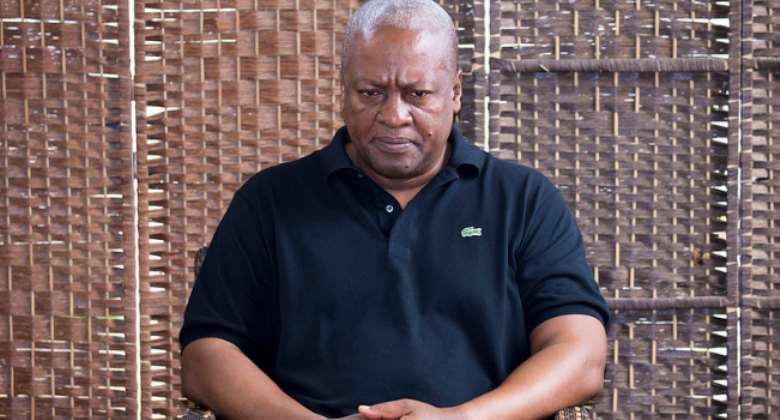 Good leadership is multi-dimensional and hard to define but most management experts can identify a few core characteristics that we can all intuitively hang our hats on.

Articulating a clear guiding vision for the enterprise being led is one of them. Having a well-defined mission is another. Assembling a competent team is a good idea. Focusing on one key issue and sustaining change on that issue is key to instituting change. In our environment, the key issue is non-application of our laws and related to this is endemic corruption. In this case, the enterprise in question is the well-being and prosperity of about 25 million people in a country once called Ghana that is not entirely recognizable as such any more. For many decades the brand of this enterprise was associated with a bold, almost grandiose forward looking vision rooted in the very idea of excellence in all aspects of its activities. Generally, its leaders though with differing political ideologies, held the very idea of excellence as a national ethos at the center of all our national pursuits. Being the first to be free from colonial domination in Black Africa, being the leading exporter of cocoa in the world, creating the largest man-made lake in the world at the time, having the fastest woman in the world, on and on and on. This was the brand. If you announced anywhere that you were a Ghanaian, it was assumed you were smart and the best at whatever you did. Everyone seemed articulate, the creative arts flourished and our athletes were fearless in competition. Second place simply wasn't good enough. As my late father, E. A. Ulzen of blessed memory from our greatest generation would say, “failure is not an option."

So what is expected of those who offer themselves as leaders of such a storied franchise with an unlikely symbol of a Black Star that shines in the night? I must say, our history is not one without blemishes, for way back in the 60s, in the midst of all the firsts, we had a moniker "Ghana - land of the dash."

Along with our national identity of fast paced achievements, was this lingering backdrop of bribery, gift giving and yes, begging (oh, dash me something or as for this one, you will leave it with me).

The origins of this pervasive idea that tokens of some sort must be presented at decision points in a transaction remain obscure. Through the 18th and 19th centuries the Dutch paid "kostgeld" annually to all the chiefs of Elmina for unspecified services and cooperation and also paid "rent" annually to the Asantehene, for Elmina Castle which was on the land of his military ally on the coast.

In any event, whether the Ford Expedition which was presented to H.E. John D. Mahama was a gift or a bribe remains to be determined. This matter cannot simply be allowed to whither on the vine and disappear without proper accounting.

We live in a constitutional democracy and all our actions must be guided only by that standard. For all the freedoms that are freely exercised on the airwaves, we must be mindful of the fact that all freedoms, rights and privileges of citizenship come with responsibilities.

The constitution is unambiguous about presidential conduct that merits censure or dismissal from office. Chapter 8; Section 69

(1) The President shall be removed from office if he is found, in accordance with the provisions of this article -

(a) to have acted in willful violation of the oath of allegiance and the presidential oath set out in the Second Schedule to, or in willful violation of any other provision of, this Constitution; or (b) to have conducted himself in a manner - (i) which brings or is likely to bring the high office of President into disrepute, ridicule or contempt; ……

It is clear that actions that cause ridicule, disrepute and embarrassment to Civitatis Ghanesis should result in parliamentary legislative actions to investigate such occurrences. Is there enough political will to proceed with impeachment? If the president has done nothing wrong, then he should welcome a lawful and transparent process to clear his name and the now apparently sullied office of the president. He is not a hereditary chieftain. He is a constitutionally chosen leader and must abide by the constitution. Article 284 of the 1992 Constitution of Ghana states, “A public officer shall not put himself in a position where his personal interest conflicts or is likely to conflict with the performance of the functions of his office.” In this matter involving the Burkinabe contractor, Mr. Kanazoe, at a minimum, his actions represent poor judgement and at worst, if proven, a criminal act attracting appropriate punishment. His own record of dealing with wayward appointees has been prosaic and consistent with poor leadership, guided by political expediency and crony capitalism.

The opposition have a constitutional duty to initiate impeachment proceedings against him even if they are not likely to succeed, because we cannot cherry pick from our laws and give preferential treatment to some above others. It is only through due process, that the integrity of the presidency be will be preserved.

Students of organizational behavior and dynamics tell us that such events are often not isolated incidents but likely an indication of a culture of management which covertly or blatantly approves such conduct within its ranks. This Ford Expedition symbolizes a larger problem which will be laid bare, with lawful inquiry. If this does not happen, then we are all guilty of receiving this gift or bribe whether we like it or not.

Curiously, the Ghana Bar Association has not offered an interpretation of the constitution on the issue of the president receiving a gift or a bribe. They were also silent when the BNI stole defendants away after a court of law had granted them bail in the NPP/ South African security trainers’ debacle. However, recently when judges were allegedly threatened on the airwaves, they piped up. Has the GBA become a self-serving organization? There was a time when the GBA educated the public on the legal implications of matters of public interest.

The president's remarks following these revelations have been pedestrian, to say the least. Some of them have been indicative of poor judgment. His remark that he prefers Toyota to American cars was most unfortunate, and unbecoming of a leader of a country with multiple trading partners. Besides the comment is not relevant to the issue of whether the Ford Expedition should have been accepted by the president. He defends himself by saying frequently that “it is God who chooses kings." First of all, Ghana is not a Kingdom and secondly this remark diminishes the importance of every single vote in our democracy.

At a minimum, the president has compromised the highest office in the land by creating the appearance of a conflict of interest and that is not defensible. He should have known better.

As a product of a political party that has essentially superintended over a steady decline in the fortunes of the country, there seems to be little basis for another 4 years of this cynical and transactional administration. We are in a democracy and others may have a completely different assessment of Mr. Mahama's stewardship. This coming election provides the best opportunity to break away from the culture of corruption, impunity and lawlessness which has been fostered and nurtured over the past 6 years under Mr. Mahama’s leadership. Realistically, the main opposition NPP, and the distant third PPP along with the more regional PNC must present clear pathways and programs of transformation of our processes because the therein lies the problem. The CPP's current leadership appears to be on the wrong side of this issue and the party is so fractured that it is unlikely to be a factor in this election. Who is best equipped to manage the task of transforming our processes best? The veteran politician Mr. Akuffo-Addo of the NPP or Dr. Nduom of the PPP, who is steadily gaining attention from voters but has a steep hill to climb. The next election should really be about the ethical management of our economy and the transformation of our value system as a nation and our culture of governance. It should be less about ideology.

Ghana is in sore need of defined leadership in change management and more significantly change leadership from individuals in the political space who are proven to be ethical in their public dealings and also skilled in large scale effective leadership. We should not forget that the inspiring leadership of the first republic was eventually felled by poor management of our economy.

T. P. Manus Ulzen is Professor of Psychiatry and Behavioral Medicine at the University of Alabama and Author of “Java Hill: An African Journey” – A historiography of Ghana.